This summer has been very different than all of the previous summers since we came to the farm nearly 37 years ago. Perhaps it could also be described as a very strange environment. With the B&B and the Gallery closed for the year, life has been much quieter for the two of us. Since late February we have spent almost all of our time at home at the farm. In this time we have only been out of Door County three times. One day was spent in a virtually non-stop drive to Mt. Horeb and back, the purpose of which was to deliver this year’s wool clip to Blackberry Ridge Woolen Mill for processing into yarn. A second trip took us to Luxemburg Wisconsin to fetch a tractor part which we picked up outside the door of the quarantining Luxemburg Motors. The last and most recent trip was to Green Bay for medical tests. To date we both have remained safe from the Covid-19 virus. We both have read a lot more books than we have in years, spent some time on fiber projects and otherwise have cared for the farm, the sheep and our gardens.

Gretchen has been able to devote much more time to her flower gardens. As a result, they are quite lovely and we both get a lot of pleasure just looking at them, while the hummingbirds and butterflies seemed to appreciate her efforts. The only missing piece to the flower garden picture is the space which was once occupied by the cedar tree clump in front of the studio kitchen. Last December the trees were brought down by a heavy wet snow. This spring and summer we managed to remove the remains of the trees, along with the plants that grew beneath them. With any luck within a couple of weeks we will have a new Magnolia tree planted along with new under-story plantings. It will be nice to not look out onto a patch of bare ground!

The vegetable garden got a slow start, largely due to the wet, cool spring. Once everything was seeded or planted the garden has thrived. With the exception of a poor showing from our onions, everything is lush and still growing. Most of the harvesting is a bit behind schedule, but the plants have made up for the delay with among others an abundance of tomatoes, squash, beans, melons, cucumbers and (hopefully) artichokes. Much of the vegetable garden was planned with the notion that it would provide food for the B&B. Had we known that we would not be feeding B&B guests, the plantings would have been more limited in number.

My chores as a shepherd have been altered by many factors. The flock is, (like me), aging and we all move at a slower pace. Lots of excessive warm and humid summer weather also limits our speed. There are fewer sheep in the flock than there were a year ago at this time, with the result that they do not graze as much per day as they did when the numbers were higher. It has taken me a time to properly adjust my daily grazing areas for the flock. At times it means that the sheep are not properly keeping up with the growth in their paddocks. By the time we finished grazing the “Orchard” pasture the forage was nearly over the heads of the sheep when they started each day. This was the early morning scene as we were about finished with that pasture close to the end of July. 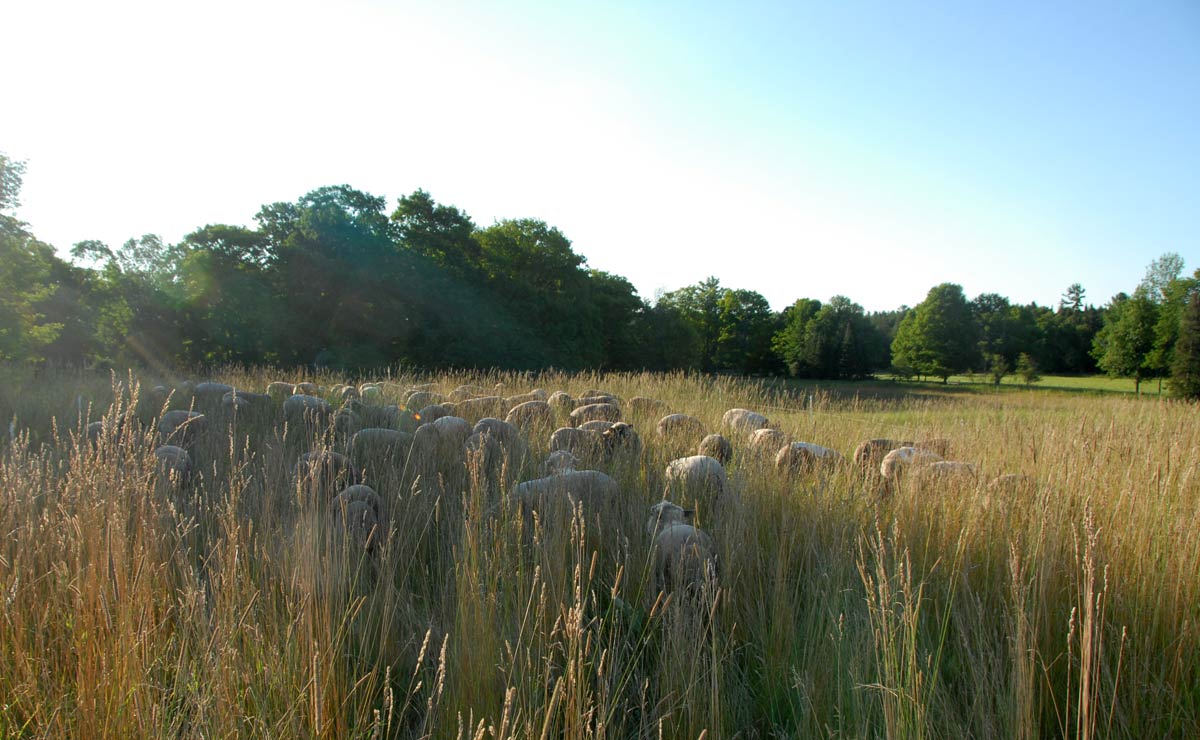 By the end of the day the “good green stuff” (which is hidden from view) was consumed. Once this entire pasture was completely grazed I needed to come into it with a mower to chew up the long, dried grass. Within a week or two the pasture is as green and lush as the pasture in the distant upper right of the image.

Besides being slower both out to pasture in the morning and coming back in in the evening I seemed to have assumed more of a role as leader. In years past I could not keep up with the group, coming and going. Now they seem to need some guidance from me, both coming and going. It makes for a much more dignified parade! To complicate matters earlier this summer I found that I had to make sure we did not encounter any unexpected guests coming or going. For a period of about two weeks I had to make sure I was at the head of the parade in order to “herd” a baby skunk which like to take advantage of the fact that the sheep created pathways across the pastures. Here is my little buddy in the middle of the path.

Luckily, the little guy was quite cooperative and just trotted along ahead of me, with some verbal encouragement on my part. It did not seem too upset and as a result neither the sheep nor I had to deal with any odors. Eventually, after a couple of weeks, my buddy moved on to a different area that we were not passing through. I actually missed our encounters. In many ways not having him to talk to each morning and sometimes in the afternoon is a lot like the flock not having B&B guests coming to visit them regularly. I have no way to document it but I have the feeling that most of the flock misses the morning visits.

As we have now done for a couple of years, we made all of our winter hay using large round bales. With the changing climate it is now almost impossible to get a long enough “window” of dry weather to cut, rake, dry and bale our hay using a small baler. In addition it is a physical challenge for the two of us to move those small bales and get them loaded into the barn. We had the cutting and baling done by a young neighbor with the equipment necessary to get it finished quickly. I get the bales moved off the field using spears on the front of one of our tractors. They are stored under tarps on one of the smaller fields near the barn. Here is this year’s harvest all put to bed ready for winter. 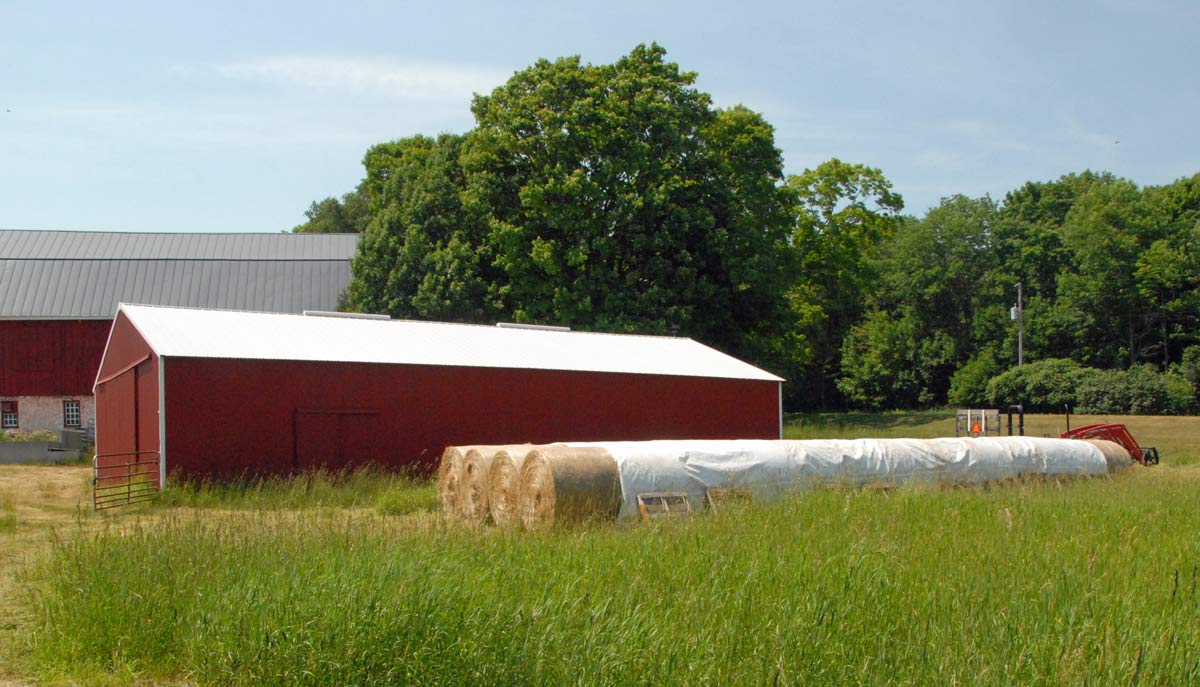 It is always a good feeling having that task completed and knowing that we should have enough winter feed for the flock.

Now that it is late August our flock of Barn Swallows has nearly fledged their second brood of chicks. We did not seem to have quite as many swallows nesting in the barn this years as last year, but never the less their numbers were still significant. This morning I counted nearly 40 perched on the roof of the barn, being warmed by the early sun light. In addition there were others in the air above them or flying into the barn to feed their last young in the nest. 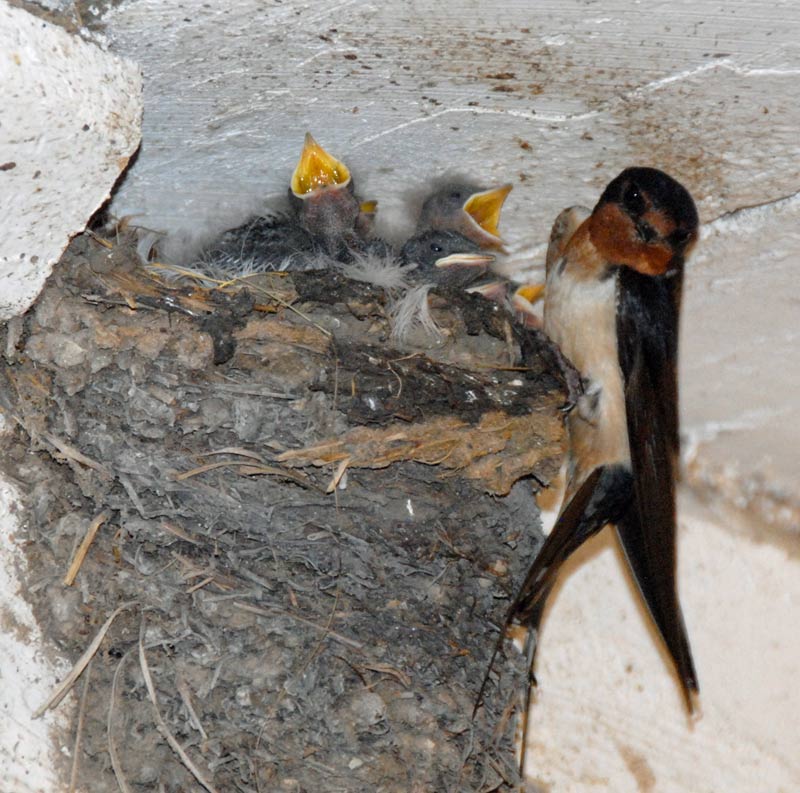 This crowd is now actually bigger than when the picture was taken and they are out flying with the rest. I would not be surprised when very soon the entire flock suddenly disappears for the year.  It is shortly time for them to head south. They will be missed.