A New Driveway, Plus More

It seems that too much time has passed by since I last updated the Ewe Turn. There are many things about which I should write. Rather than try and include everything in a single post i will devote some time to each of the major events and, hopefully, cover the most important aspects of each over the next few days.

It sounds like a broken record, but the vast amount of this summer’s activities have hinged on the weather. Many things were planned, most of them were delayed or curtailed. The resulting levels of frustration were greater than ever expected. Early this spring we had made a decision to build a new road to our machine shed. A bit of history is needed to explain the need. 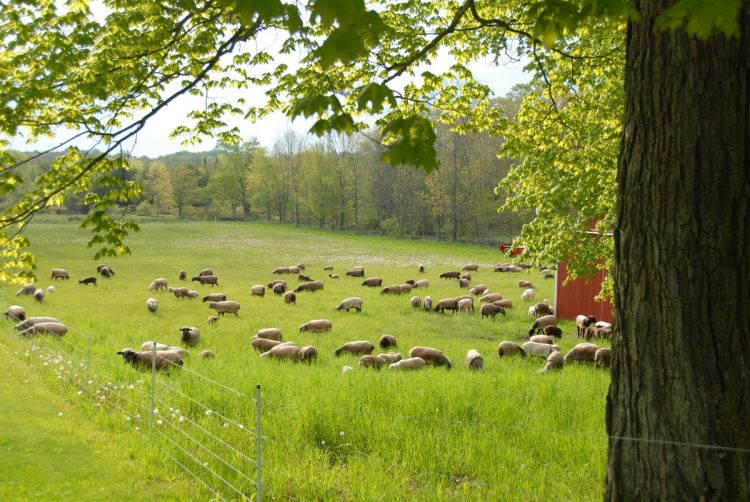 When this farm was originally sold around 1980, the total acreage was chopped into “convenient” 40 acre chunks. These chunks corresponded to the building blocks of land first outlined by the Homestead Act of 1892. In the case of this farm the original acreage consisted of six 40 acre squares immediately adjacent to each other. Not all of those squares proved suitable for farming. As the farm was developed, fields were cleared and made into pastures and ground suitable for tillage. Usually these fields (less than 40 acres in size) included portions of two adjacent 40 acre squares. From an agricultural standpoint these fields made perfectly good sense. However when the farm was sold about 75 years later, it was sold in 3 separate blocks, each corresponding to two of the 40 acre squares. Unfortunately a number of good fields were divided between the three separate buyers. Thus the 80 acres which Gretchen and I purchased in 1983 contained two pastures which overlapped onto adjacent land which we did not own. Over the years we become good friends with some of the owners of this adjacent land, most of which they used as a source of timber (cedar logs) and as hunting land. It was agreeable with them that we could use the pasture land that we “shared”. Most important of these pastures is the one we call “The Road Pasture”, since it abuts the County road that is our northern border. Use of this land was of great importance to us when the County “improved” the road, effectively cutting us off from being able to get our farm equipment onto the road from the shed located on this land. The only safe option was to drive off of our portion of the pasture to the east end where it was relatively safe to pull large farm equipment onto the road. It also meant that we could graze the sheep on the complete chunk of pasture rather than only the portion that we owned.

All of us grow old, and some of us have died since this pleasant gentleman’s agreement took place. The land east of us is now owned by a different and younger owner. Under the new ownership, the agreement no longer was viable. We offered to purchase at above market value the small portion of the “Road Pasture” which we did not own, but were turned down. Last fall it soon became clear that our access to the County road was soon not to be. Our only alternative was to build a road across our end of the pasture. The prospect was expensive. The road would not be nearly as safe as the old access. But it had to be done. This spring we contracted to have the road built. The work was tentatively scheduled for early June. Due to the excessively wet spring and early summer it was not until August 3rd that the contractor was able begin work. 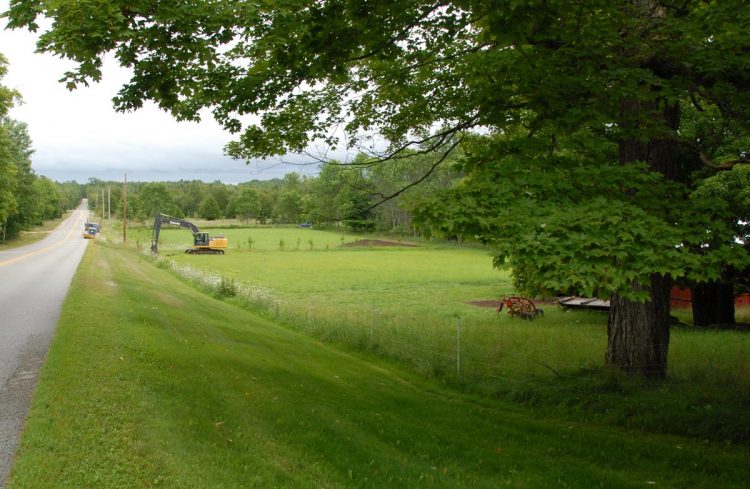 This was the scene on the morning that work began. The forecast for three consecutive dry days did not quite hold out, But the job was finished in three days, not without difficulty. On the morning of the second day, the first load of rubble was to be dumped off the edge of the County road to begin the more gradual slope that was necessary. Unfortunately, the box on the back of the truck came loose as the load was about to be dumped. Luckily the truck did not tip over, but the box ripped off the large hydraulic ram used to raise the box, spilling a large amount of hydraulic fuel, and seriously bending the frame of the truck. The entire morning was spent with damage control. Eventually the work could again resume late in the day. Here is a view of the first successful dump. 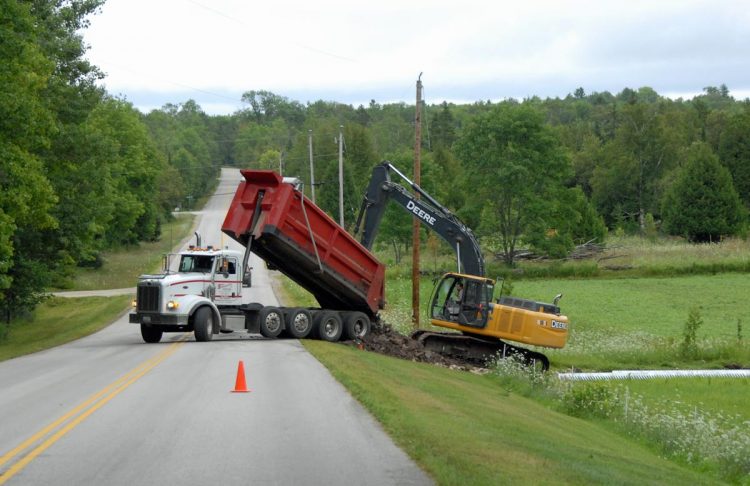 By days end it poured unpredicted rain! In another two days the job was done. “All” that remained was for me to rebuild the pasture fence that I had to temporarily remove and then to build a new fence delineating the eastern edge of our property. Those tasks had to wait until September. 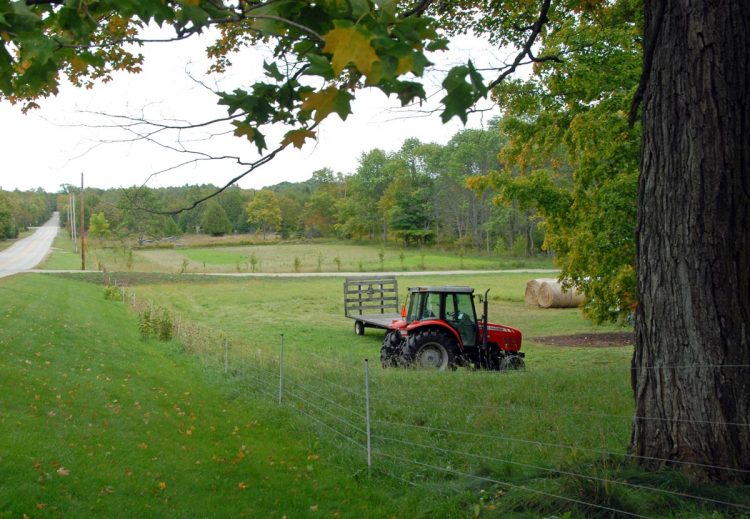 “Road Pasture” with new road on a gloomy September day

Now we have a nice, wide gravel roadway, with a even, gradual slope, which permits us to pull our largest equipment onto the road to head west to our major hay field. It is a blind intersection, so I now need Gretchen to stand at the top pf the hill to wave me and my equipment onto the road when there is no oncoming traffic.  Sadly, a big chunk of very nice pasture is now covered with fill and gravel, no longer to be grazed by the sheep. I now wonder what the originally owner of the farm, Peter Graf, would think about all this. He and his family cleared this field of trees and stones and made it into a fully functional pasture. A great amount of work went into making this field useful. Now so much of that is gone. Seen from my own personal perspective I will miss the complete field. It was always a good place for the sheep to graze. The view of the sheep on the pasture, with the trees in fall color, up against the barn will never be as beautiful as it once was.