It is now the week prior to Thanksgiving. Compared to this time last year everything has been going well. There has been at least one snafu during the last few weeks, but it was manageable and now has been resolved. (More about the snafu in a little while.)

A year ago Ulmer (the ram) managed to severely sprain my right ankle. The rehabilitation set up a backlog of many tasks for us, some of which we still have yet to completely resolve. Nevertheless, the ankle is almost healed. Whatever remains of the damage could, potentially, be repaired surgically. The extended downtime resulting from such surgery would be as long and as disruptive as the initial rehabilitation. With it would come no guarantee of success. So this old shepherd has opted to live with the slight residual discomfort. At least this year, Ulmer was a proper gentleman during breeding. The two of us got along just fine!

Mid October to mid November is the month in which our ewes are (hopefully) bred. This year we had 58 ewes with five separate rams. This number of ewes is slightly smaller than last year’s. We now have quite a contingent of ewes who have retired from breeding and who can concentrate solely upon producing wool and providing friendship.

We got through breeding with few problems. A new brand of marking crayon insisted upon falling out of the harnesses worn by a couple of the rams. This left us with a short period for each ram when we could not verify his performance.

One morning found Ukiah’s group split up between three pastures. Most of the ewes were where we had left them the previous night in Pasture #1. Ukiah, and three of his girls were in the next door Orchard Pasture, luckily across the temporary fence from Ulmer and his group. And one ewe, Whosits, had somehow ended up in Pasture #2, in with Stud Muffin, and his harem. No one seemed the worse for wear. We got Ukiah and all of his girls, minus Whosits, back together in #1. Whosits spent the remainder of breeding in with Stud Muffin. We can only speculate on the overnight cause of panic. Ukiah’s group was in the area of #1 which includes the apple trees. While there were few apples left, the deer still insist on visiting, in the hope of one more apple. One or more deer  jumping multiple fences into Ukiah’s pasture in the dark of night was the probable cause of the chaos.

All of us managed to survive a three day period of intensely strong winds. The storm was likened to the storm which sunk the Edmund Fitzgerald. Luckily for us no trees blew down in the pastures and no sheep blew away in a strong gust. (The storm was a few days prior to the scattering of Ukiah’s group, so we cannot blame it for the re-shuffling of sheep.) Our few hours without power were manageable and were not nearly as long as some outages in northeast Wisconsin.

All in all, breeding went well. Toward the end, the weather calmed a bit. For many days, when the skies permitted, we have been treated to spectacular sunsets. This image is of Ulmer’s group on one of their last nights out. (By the way, the green eye reflection indicates the lack of Moorit genetics. That is Ulmer, with the white nose spot, looking straight on.) 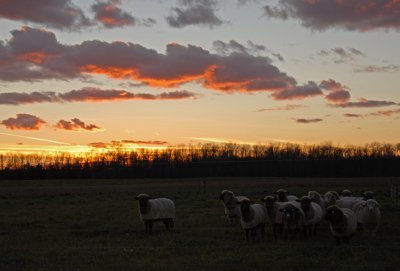 Each day from November 6th onward, we brought a breeding group back into the barn. Once there, the marking harness was taken off the ram. He had his hooves trimmed and was perhaps fitted with a larger jacket. The ram was then reunited with his buddies. (A week or so of semi-violent re-acquainting followed.) The incoming ewes also had their hooves trimmed and jackets replaced where necessary. By noon on November 10th everyone was back in the barn.

Part of the time when the rams were out with the ewes, Gretchen was off attending SOAR (the Spin-Off Autumn Retreat). She came home re-energized with all sorts of spinning ideas. She was especially inspired by her class on natural dyeing with Demetrio Bautista Lazo. One of the things the class inspired her to do was to assemble and standardize all of her samples from her natural dyeing projects from the last few years. Below is a photo of the collection. The image does not do justice to the colors, yet it is exciting to see the assembled colors (most of which were derived from plants, either wild or cultivated from Whitefish Bay Farm). Job well done, Gretchen!