I usually find that writing an entry in the Ewe Turn is an easy matter. If the subject does not cause some inspiration, it gets filed away for possible future use. However, I am currently having a lot of difficulty composing this entry. Unfortunately, it cannot be set aside for a better time or atmosphere.

She had not been well much of this year, but she seemed to be improving, at least until the last couple of weeks. Over the last few days she seem to retreat into her own private world. On Saturday, the retired ewes had their first day on pasture. When it was time to rush through the open barn door, Nanoo Nanoo stayed behind. It was a joyous day for the remainder of the flock. For us it was a day tempered by the condition of our old friend. The next morning she could no longer get up. Paul, one of our friendly vets, was kind enough to come out to the farm help put Nanoo Nanoo quietly to sleep.

When Nanoo Nanoo was born on March 15 in 2002 I was privileged enough to be there. For Mindy, her mother, this was her first lambing. It went so smoothly that all I needed to do was stand aside and watch. Within a half an hour Nanoo Nanoo had gotten up and nursed well and vigorously. When she was done with her drink, she walked over to me as if to say “Hi mister, it’s good to meet you.” Our friendship was sealed. 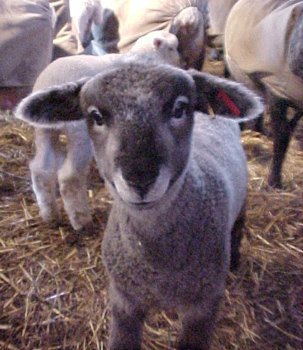 Nanoo Nanoo as a lamb

She had her own special personality and the ability to seemingly communicate with anyone. She was a peaceful creature who never seemed to quarrel with any other member of the flock. She was never the leader of the flock. Nor was she ever the overly friendly greeter when guests came to visit, but she would eventually show up for “conversation”, once the initial excitement settled down. 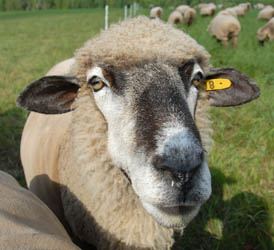 Nanoo Nanoo as an adult

The void of silence that she leaves behind her in the barn and on pasture will take a long while to fill. May her spirit find a lush green pasture to safely graze upon. Farewell dear friend.