Hello all! This is your faithful correspondent, Brie. It is snowing here for the first time this winter. (Ya, I know it is not yet winter on the human calendar, but I figure if it is cold and it is snowing, it is winter!) Since it is snowing, about all we can do today is look outside and be happy that we are indoors, dry and out of the wind. That’s me, in the background, along with some of my lamb buddies and big Alfred, the wether. 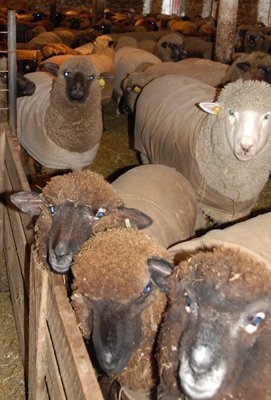 For a break in the routine, Queso, our technical geek sheep, hacked into the old shepherd’s computer to find out what is going on in the world beyond the barn. We learned that the international price for wool is doing alright. That is always good news. The price of corn is down a bit…maybe the old guy will actually give us a bit more in our rations (a sheep can dream can’t she?!). Then we read what the old guy wrote in our blog a few days ago. Well that did get me a bit worked up.

I think it is fair to summarize the shepherd’s literary effort in just a couple of sentences. He spent just two short paragraphs writing about what he calls the breeding program. Within those two paragraphs he talks a lot about the weather and what he had to do, like chipping a bit of ice from our buckets. That’s it! Then he writes about trimming trees, putting shingles on roofs. Lastly, he writes about the wonderful food he harvested from his garden and how he and the nice lady gets to eat it. There you have it. He was pretty long winded trying to tell everyone not much of anything. The only important news concerned us, and he gave us a meager mention. Well that certainly melted my lanolin! So let me attempt to let the world know what it was really like here in October and early November.

You may remember that a year ago I was really quite excited about the prospects of spending time with one of those sexy rams who live in the barn annex next door. I was put out when it turned out that only some of the older girls got assigned that duty. All I could do was wait to hear about their adventures when they returned to the barn a month later. This year was different. I was chosen to go out with Andrew (along with ten other girls). This is Becky; she was also in our group in #4. 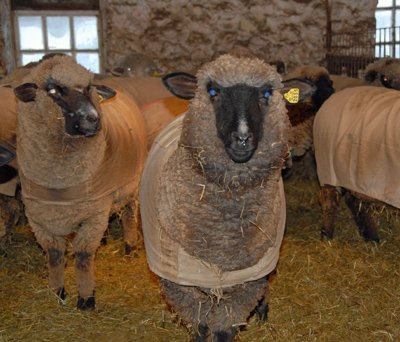 We spent nearly a month together in pasture #4. That is the pasture with all the big stones, where the woodchucks live. Contrary to some rumors, we do just fine getting along with the woodchucks. They have a few holes in the pasture, but we just step around them…excuse me, I digress. Another group of girls went out to pasture #1 with Axel. At first we could barely see them, but, toward the end, the shepherd moved them down the pasture so that they were right across the old stone fence from us. My mom, Zoe was with my dad, Aries, and some more girls in pasture #2. They were around the corner of the maple grove. As a result we could not even see them.

Before I go further, let me warn you about those promotions for “romantic getaways”. There is a lot more work involved with them than is ever mentioned in the fine print. First off, the food was nothing special or different. It was the same old pasture we had grazed earlier, and when the grass ran short the grumpy old shepherd brought us some baled hay from the barn (and it wasn’t even some of the better quality stuff). When we got back to the barn we found out that the rest of the flock had been dining on yummy second crop hay from some left over large bales the shepherds were in a hurry to get out of the way. We at least got to join that feast for the last few days that those bales lasted.

The comforts of home are not out there in these romantic groups. If it rains, you get wet. If the wind blows, you look for stone fences or trees to break the wind a bit. The shepherd did bring us grain morning and night, which is more than they got in the barn. But he just did that so that he could see how we were doing in one bunch and to see if we had crayon marks on our rumps (whatever happened to modesty?). In addition you are outside 24 hours a day, which means we are out there in the pitch dark night. It gets spooky in the dark, especially when we hear the coyotes start to cackle. We at least were glad that the old shepherd had made sure that the power to the electric fence was running at its maximum.

On top of all this, the rams really get pretty squirrelly. Our guy, Andrew, insisted on always trying to herd us away from the fence so we could not see what was happening with the other groups or communicate with them. He didn’t even want us to get close to the shepherd. Andrew did, however, relent when they brought us grain, but we know how guys are, they always want something to eat! Andrew could get all lovie-dovie, but most of the time he was a pain in the butt. I gather from the ewes in other groups that their guys were pretty much the same with them.  And all this talk about fine wine and candle light…just forget it. I was going to describe some of our other activities, but Queso advises against that. She says that the lambs in the barn are still too young to learn about that stuff. That last comment relates to you Cupcake! 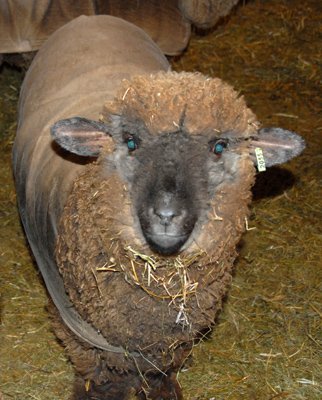 The grumpy old bearded guy finally relented and let us all come home (in the middle of a downpour I might add). So here we all are, safe and sound, settled back into the barn. And you may ask “What did I get from participating in this experience?” Pregnant… (or at least I think so). The task at hand is now to think of a lamb name or names that begin with the letter “D”; something that preferably is cheese related.