A Week into Lambing

Today, March the 18th, is the ninth day of lambing at Whitefish Bay Farm for 2010. The rate of labor and delivery has slowed a bit. Hopefully I can get this entry completed before the day is over and before the news is completely out of date.

The first lambs arrived last Wednesday, the 10th, which was the expected first date. However, the first ewe to deliver was Toodles, who was a day early. Two of her compatriots, Suzy and Trudi, were right on schedule. Through the first seven days 24 ewes delivered 37 lambs. Interestingly, of the first ten lambs born, nine were ewes and only one a ram! Since then the law of averages has caught up with the flock. As I write 41 lambs have been born of which 19 are ewes and 22 are rams.

While there have been some minor glitches (as are to be expected) the entire group of lambs have been of good size and very good health. The two of us have only had to assist with two deliveries. So far, it seems that the ewes have conspired to deliver the vast majority of their lambs between 10 PM and 6 AM. The two shepherds have thus had the “benefit” of little sleep.

All of us (shepherds, sheep and Pussa the Cat) are at least into the normal lambing routine now. The routine makes things feel a bit smoother, especially if we can avoid any major problems. The vast majority of the deliveries are expected to be completed by March 29th. Unfortunately, we will have a couple of tardy moms who may stretch lambing out to about April 11th.

So what is our “normal lambing routine”? I will begin the day at 6AM which should, hopefully, find the two of us being awakened by the alarm clock from four hours of sleep. The first order of business is a quick audio check on the barn using our baby monitor. If there are no sounds indicating newborns, I will head to the barn for a quick visual check. If we detect newborns or a pending delivery we will both go to the barn to take care of the new mom(s) and lambs. Back to the house for a quick cup of coffee and a snack, plus (of course) breakfast for Pussa. We then return to the barn for chores, i.e. sheep breakfast. 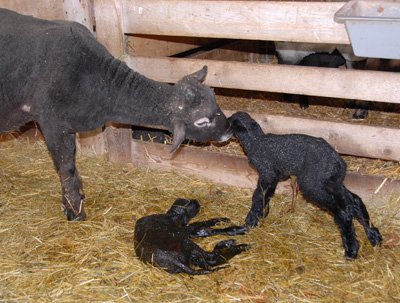 The ewes who lambed within the last 3 days are housed in jugs (5′ x 7′ private pens). There they have their own private feeder and water and the opportunity to bond with their lambs. It gives us a chance to make sure they are doing well in the first critical days after lambing. Unless we need jug space sooner, on their 4th day together, the new family is moved to a mixing pen with other similarly age families, where food and water is shared. The mixing pen will be filled when it contains about 14-16 ewes with their lambs. We then start a second mixing pen. Eventually, as the lambs grow older, the mixing pens will be combined. The final phase will involve consolidation of all the mixing pens. 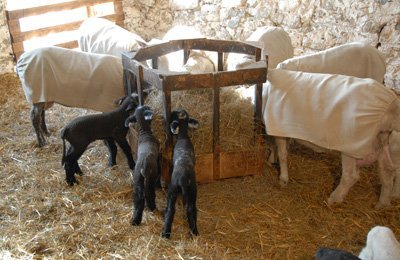 Morning feeding includes hay and fresh water to each occupied jug and to each mixing pen. In addition there is need for food for the remaining group of pregnant ewes and “retired” ladies. I also almost forgot that last year’s 30 lambs are housed in the addition to the barn along with the rams and the chickens. It is cozy there but they do well…as long as they are all fed!

With luck, morning chores end at around 9:30, once we spread fresh bedding in any of the pens that need it. It is finally time for a late shepherd’s breakfast and perhaps time to just catch our breaths. Depending upon what we observed during chores we will have to return to the barn throughout the morning and afternoon to check on the progress of any ewes who show signs of labor. In mid-afternoon we return to the barn for a number of special chores. Once the lambs have been “on the ground” for over 24 hours, they receive an ear tag with identifying number and get their tails docked. It is at this time that we also decide which ram lambs get castrated. After 48 hours in the jugs the moms get fitted with a jacket, get their hooves trimmed and receive worming medication. The next day, if lambs and ewes have adjusted to all these changes they will be ready for the move to the mixing pen.

Around 5 PM we start evening chores, which is a repeat of the morning feeding with the additional treat of grain. By 7 PM we are ready for our own dinner. We then resume regular barn checks every couple of hours. If we can get to bed by 10 PM we will be happy. Unless we expect a delivery we will try to get four hour’s sleep. At 2 AM I head to the barn for a visual check. Then before it feels like it the alarm is going off again at 6 AM.

Throughout this entire routine the chance is good that the schedule will be thrown of by the birth or births of lambs. The best scenario is a ewe who does everything by herself with us just observing to make sure everything goes well. If there are problems we may have to intervene. Once the lambs have been born and mom starts getting them cleaned up they may be up and trying to nurse within 10 to 15 minutes. We then usher the new family group into a vacant jug. Once into the jug we clip the lambs umbilical cord short and dip it in iodine to disinfect it and to sped its drying. I then strip out some milk from the mom, thus assuring that she has a milk supply and that it is available to her lambs. Hopefully, “clip, dip and strip” is all that need be done and the mother and lambs can get the rest of the job done themselves.

Now for the personal notes. Toodle’s ewe lamb is Zanadu. She already is showing that she is a member of the Mindy clan. Like her great grandmother Mindy, grandmother Nanoo Nanoo and mother Toodles, Zanadu was born friendly. She has already approached the two of us on her own and willingly accepts all the attention she can get.

This year’s lambs will all have names beginning with X, Y, and Z. (We did not figure that we could come up with enough names starting just with X. Hence we are combining the three letters.) Some of the rising stars to watch for may include the girls Zanadu, Yoko, Xantha and rams Zoltan and Zorba the Sheep. We also have a Zucchini, who, unfortunately, seems as dumb as the vegetable.

I think that I need to stop here and make another barn check. Rubina is overdue and looking like a large coffee table. 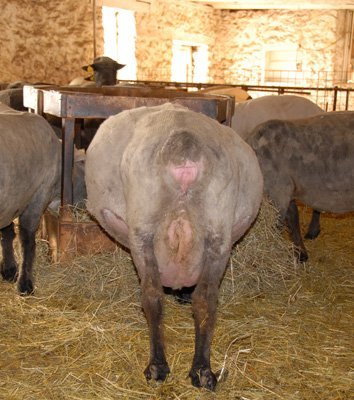 Rubina is due anytime now (quite obviously!)

Postscript: I did not make it! Another lamb born while I was typing. Truffles delivered a lovely ewe lamb, unassisted. They are doing just fine!