It is difficult to believe that so much is happening at the farm in such a short space of time. When I began thinking about writing this entry, it was the last week of May. Already by then Mother Nature was at least three weeks ahead of her normal calendar and seemingly she was speeding up further. At a time when usually we think about the cherry blossoms just finishing and the apple blossoms being a week away, the cherries had long since finished and the apples were in full bloom. As I worked at planting the vegetable garden, I had thought that I would take a nice photo of our four crab apples, in full bloom, just next to the garden. When I got to taking the picture all but one tree was finished. As I took pictures the ground below the tree was becoming white with falling blossom petals. 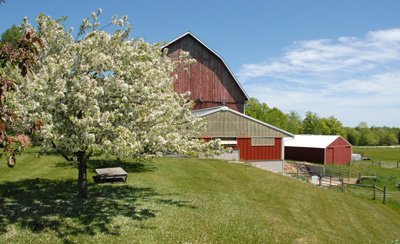 Next to the garden, on a fence post to the first pasture, sits one of our bluebird houses. I had been aware of a pair of Eastern Bluebirds feeding young in the box. On the day of the final apple blossoming (May 27th), as I worked in the garden, I sensed that the pair were especially busy and perhaps a bit anxious due to my proximity. It was much to my surprise that later that afternoon the young began to launch themselves from the box. This too seemed so early. 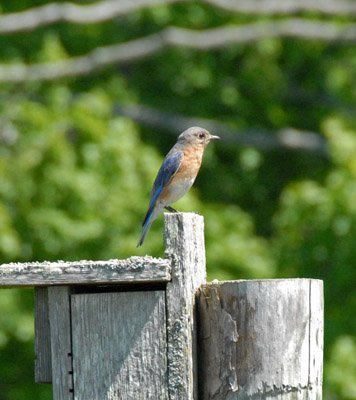 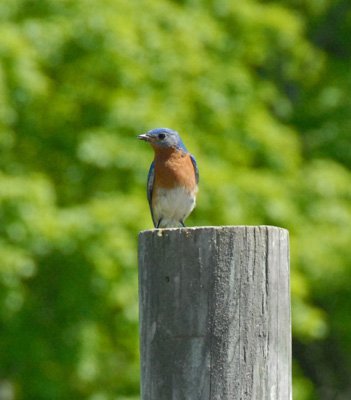 In a similar fashion, every aspect of life here is moving forward so rapidly. By the first of June we were already seriously considering our first cutting of hay. Strategically timed rains have continued to delay cutting such that now, by the 9th of June, we are woefully behind, at a point where we normally would be just getting the haybine lubricated and tuned. The pastures are growing faster than the sheep can graze them. Many areas of grass are too deep for the sheep, such that much of the grass is being trampled rather than eaten. Yesterday the flock began grazing in the pasture we know as the “Orchard”. This morning, as I moved fencing prior to getting the sheep out I discovered that there had been a Wild Turkey nest in the middle of the previous day’s grazing. Sadly for the turkey hen, most of the eggs had been broken and the secrecy of the nest destroyed. It was just another sign of how far advanced spring has come. It is interesting to contrast the size of one of the surviving eggs to those of our Barred Rock chicken eggs (which are quite large). As expected the speckled Turkey egg is bigger. The weigh is surprising: at least one and a half times as heavy as our chicken egg. 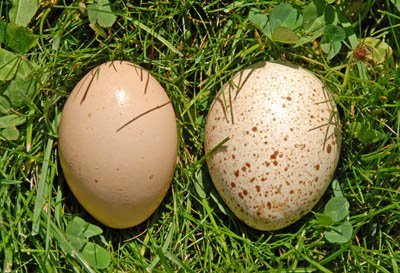 Turkey egg on the right

In all our scurrying hither and thither, I neglected to make note of the fact that our Gallery season began in the last weekend in May. So here again is a tardy announcement that we are open and have, what we believe, an especially nice mixture of fiber, photography, pottery, woodwork and jewelry. The Gallery is open everyday except Tuesdays, from noon until 5 PM.

Among one of the special features associated with the gallery this year will be a series of classes that Gretchen will be giving to anyone interested in learning the art of spinning with a drop spindle. Each class runs for two hours each day of a two day period. The first classes are scheduled for June 9th and 10th and June 12th and 13th. A list of subsequent classes for July through September can be found on our Events Page. Gretchen is also willing to schedule special classes for individuals on other dates. The cost of the class for each individual is $50. In addition to the cost of the class is a $10 material fee that includes a “CD Drop Spindle” and a supply of roving from our flock with which to begin spinning. To schedule for a class contact us either by phone or e-mail.

Lastly, the Bed and Breakfast is open and happily hosting guests. We have already been especially honored to have guests from Denmark. Rigtig mange tak til Kirsten og Axel for besøget. Vi håber at I kom godt hjemme. Kærligste hilsener!