We have reached the time of year when life seems to accelerate at a sometimes maddening speed. As if to emphasize that point, yesterday we began the second round of weighing the lambs. First that  means that the earliest lambs are now 60 days old. That also means that they will begin getting their CD&T shots (immunizations against tetanus and certain types of clostridial diseases). It is difficult to fathom that Buttons and Bunny are already that old!

We are hopeful that very soon the flock will begin their regular spring grazing schedule. In a normal year that event usually occurs about the beginning of the third week of May. This year has been so messed up seasonally, it was anyone’s guess where we would be at this point. The record breaking warmth of March got everything growing, well in advance of normal dates. April returned to more seasonal temperatures. (It was actually a colder month than March.) For April we repeatedly experienced overnight frosts; in the last week of the month it got into the 20°s (F). The cold overnight temperatures, coupled with virtually no rain, slowed any pasture growth to a near halt. It remains to be seen how much damage the cold did to fruit crops in the county. We are very thankful that we began May with more rain than the entire month of April. Finally, the pastures are responding. There soon should be enough growth that it will not be harmed by “eager eater” sheep.

Most of the wild flowers are blooming well ahead of schedule. It is strange to see Trout Lilies blooming in April. This one, next to the stone fence in the 4th pasture, was in full boom in April. 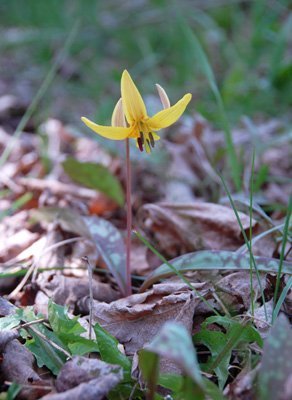 Adding fuel to the accelerating pace of spring was our annual announcement of fleeces being available for purchase. Most of the 129 or so fleeces were sold in a couple of days in mid-April. If you are in the market for beautiful Corriedale fleeces, we have a number of colored fleeces still for sale. They are listed and described on our Colored Wool page. The bulk of the fleeces that have been purchased have already been shipped to their new home. The first shipment looks very “un-fleece” like sitting on the front porch waiting to be picked up. The bulging boxes are telltale signs that the fleeces are trying to escape. 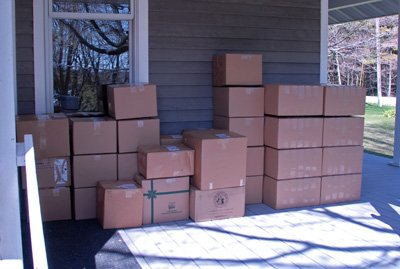 At least the boxes were gone before the B&B opened. We are now open and enjoying our first wave of guests for the season. In addition, this coming week Gretchen and friends will be dyeing our yarn in a large, intensive project.  Our hopes are that the new batch of naturally dyed yarn will be ready for sale when we open the Gallery on Friday, May 18th.

Not to be outdone by our efforts, the most recent wave of seasonal migrants in the bird world have arrived. This week has been marked by the arrival of the Cliff Swallows, the last of the swallows species that nest on the farm. The Tree Swallows and Barn Swallows are already busy with nest building. The White-crowned Sparrows arrived a couple of days ago, like this handsome guy on the steps to the barn. 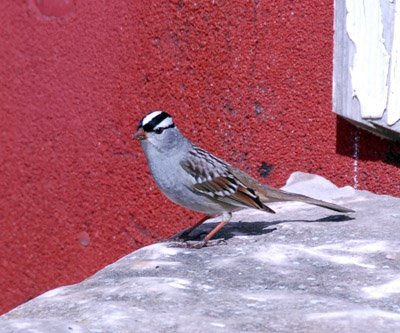 Even the Monarch Butterflies are back. We saw our first arrival on May 3rd, a good three weeks early! The pace does quicken!