Those who have stuck with this blog over a number of years will probably remember that I have long term ties to the people and country of Denmark. I lived there as a foreign exchange student during 1965 and 1966. Since then, with one exception, I was not able to return to my second “home” until 2005. Luckily, since 2005 I have been able to spend between 10 and 14 days there every other year. I returned again this year in the last week of August for a two week stay. My narrative is out of sequence for the blog, but it has taken me a bit of time to edit photos, while catching up on farm chores that were neglected due to my absence. Hopefully I can cover my adventures with this and possibly a second posting. There are lots of details that I must neglect simply due to lack of time and space. For that I apologize!

Traveling to and from Denmark has become more and more difficult over the last 12 years. Airline connections between Green Bay and Chicago have become spottier, in addition to being more unreliable yet more expensive. This year we decided that I would rent a car and drive from Green Bay to Chicago (and reverse the procedure upon my return). The cost was not that much different. The traveling time was greater, but I was able to assure myself that I would arrive in Chicago on a timely basis and not suffer any lost baggage in the process. Once in Copenhagen, my travel conditions, as always, improved dramatically thanks in large part to the superb railroad system that exists in Denmark. Within moments of clearing customs I am able to purchase a railroad ticket, walk a few hundred feet below the terminal and get on a train headed to Odense, my “home”. 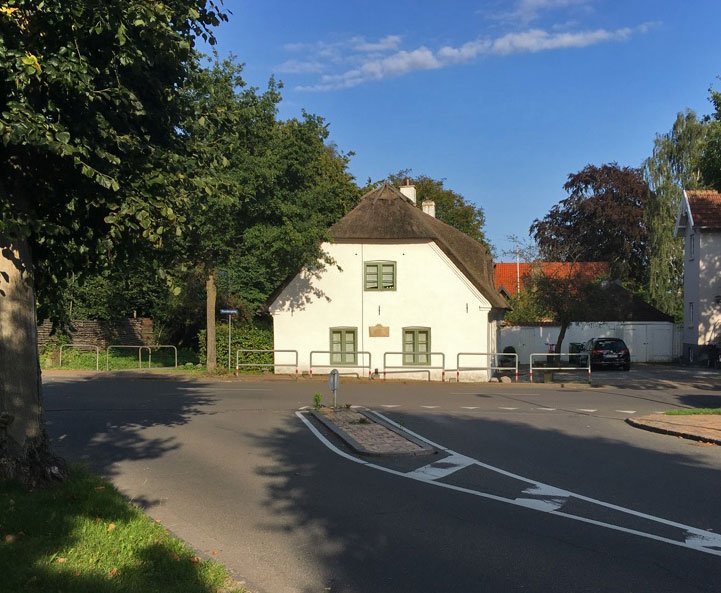 As I have done on each of my seven trips to Denmark since 2005 I have always begun my trip with a stay in Odense, on the island of Fyn. I have been lucky enough to stay in a B&B, Engvej Guesthouse, that is just two blocks away from the home in which I lived with my Danish host family. My old home is by far the oldest building in the neighborhood, built in the early 1700’s. My family had to move shortly after my departure. The house has changed since I lived there. It is painted a different color and the gardens around it are not nearly as beautiful as they were when I lived there. Nevertheless it is as close as I can get to returning home. Fifty two years ago, everyday, 6 days a week, I walked from home, down this street, (passed the house which is now a B&B), on my way to and from school, Sct Knuds Gymasium. There are still lots of memories that follow me around this neighborhood.

For this trip I would spend four days living in Odense. I had planned to revisit a number of places in the city and on the island that surrounds Odense. It was an attempt to revisit a lot of old memories and to see how things have possibly changed. My first full day was spent walking the streets of Odense, much as I had done years ago. In many places the town has retained its old character. In some areas the old houses have been wonderfully preserved. The homes are much like they would have looked 250 years ago. 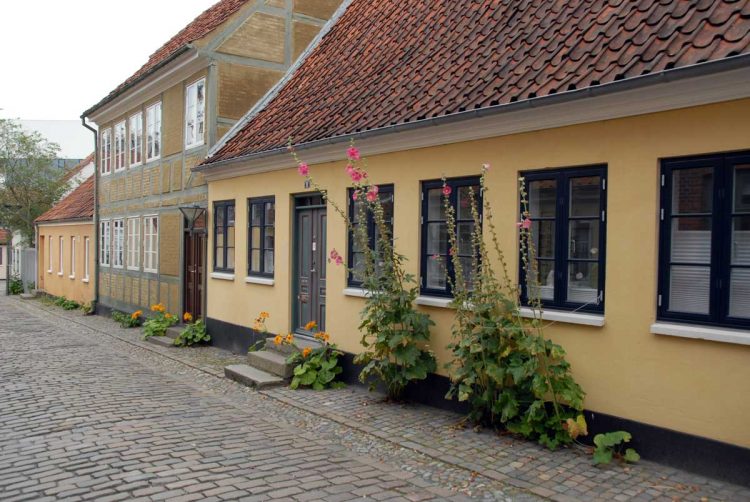 These particular homes, many of which are half-timbered, are in the old quarter near the birthplace of Hans Christian Andersen. The hollyhocks are so characteristic, and were still blooming in late August. The City Museum is located nearby in a cluster of old buildings. 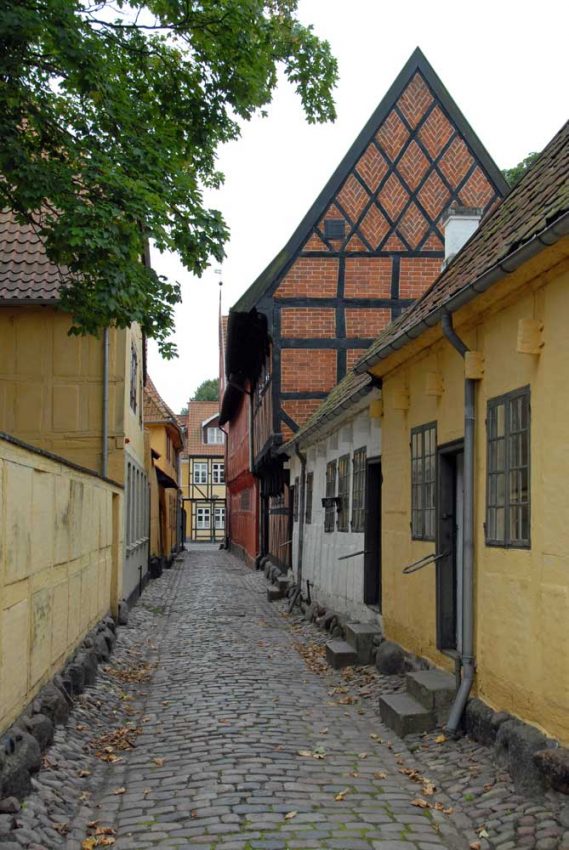 My day of walking around Odense was one of the few days in which I was rained upon. I was lucky in that regard, since Denmark had experienced one of the wettest and coldest summers on record. Half way through the trip I was drenched in rain as I drove to Ribe. Then, it was not until my last two days in Denmark that the weather turned dark and threatening.

Gretchen and I have (after many “interesting ” attempts) managed to master the art of baking Danish rye-bread (rugbrød), which is often one of the key ingredients in what are now classic Danish sandwiches (smørrebrød). In order to get out of the rain I stopped for lunch at one of the best smørrebrød restaurants in Denmark, Kong Volmer. Here is lunch, washed down with a good local dark craft beer. 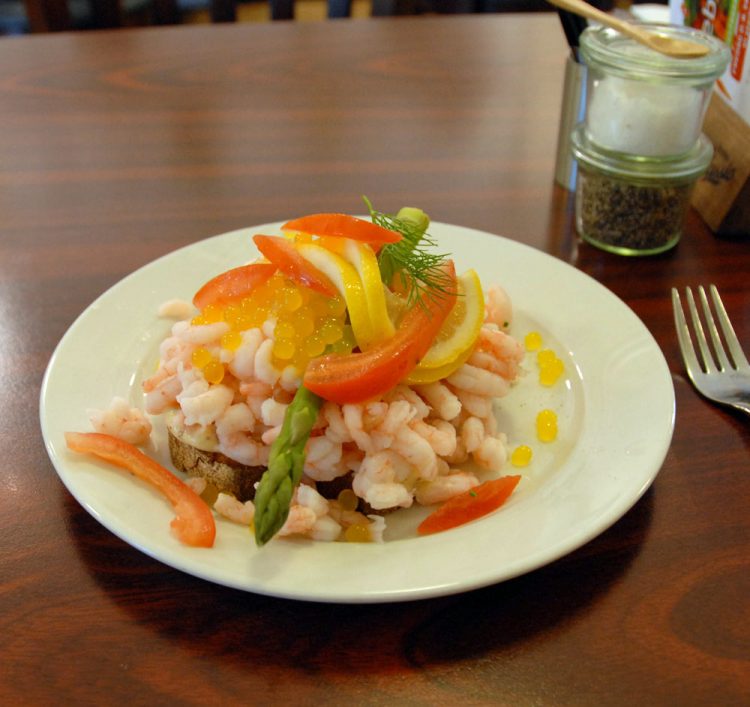 For my second day on Fyn I headed south toward the town of Faaborg. I would spend most of the day in the south. Part of the time I spent in the little town of Korinth, (the location of an agriculture school which housed our two week language school when the 16 of us Americans arrived in Denmark before we went to our various homes). The town is dominated by a magnificent manor house and church, much of which dates to the 1600’s and 1700’s. The church of Brahetrolleborg always seems magnificent. 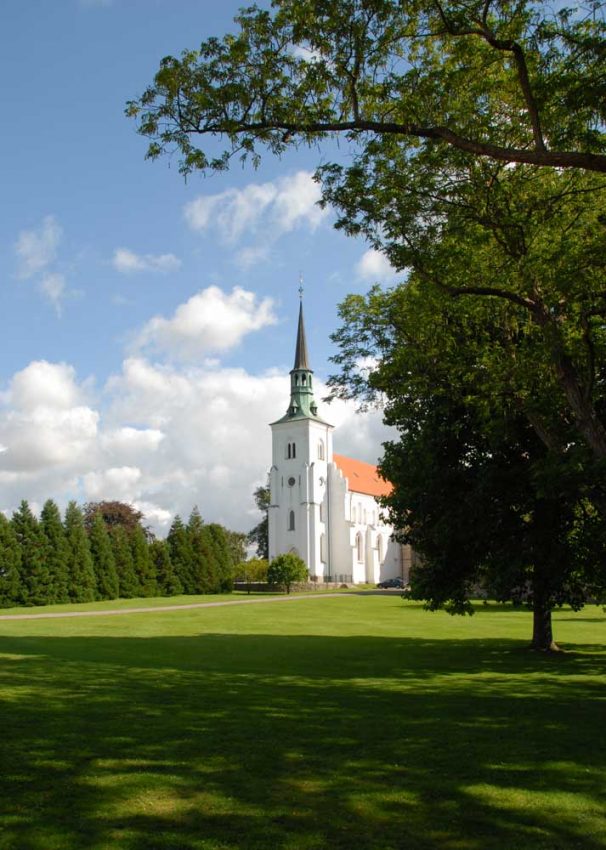 The southwest corner of Fyn is, in my opinion, one of the most beautiful regions of Denmark. This trip, Susanne, my B&B host, offered to show me her father’s very old Danish farm (from early 1700’s). Her father, Bent, is in his 90’s and still lives there. Recently the farm won second place in a national contest for the most beautiful farm in Denmark. It is a honor well deserved. I feel very honored to be able to visit the farm and also spend the afternoon with Susanne in this wonderful corner of Denmark. The image below is a view into the hills above Faaborg. 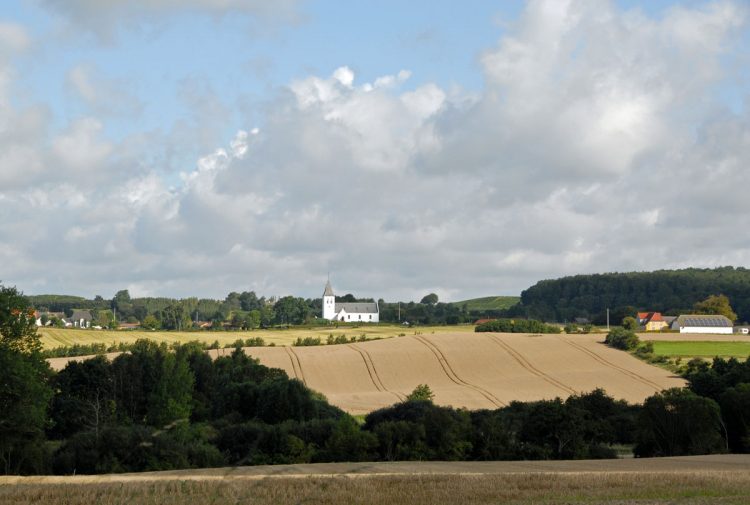 The following day was spent in my other favorite spot in Denmark, the northern coast of Fyn, more specifically on the narrow peninsula that defines Odense Fjord. Every visit I manage to walk at least half way out on the peninsula, Enebærodde. For me it is a sort of “pilgrimage” to one of the places that I remember with special memories from my year’s stay in Denmark. 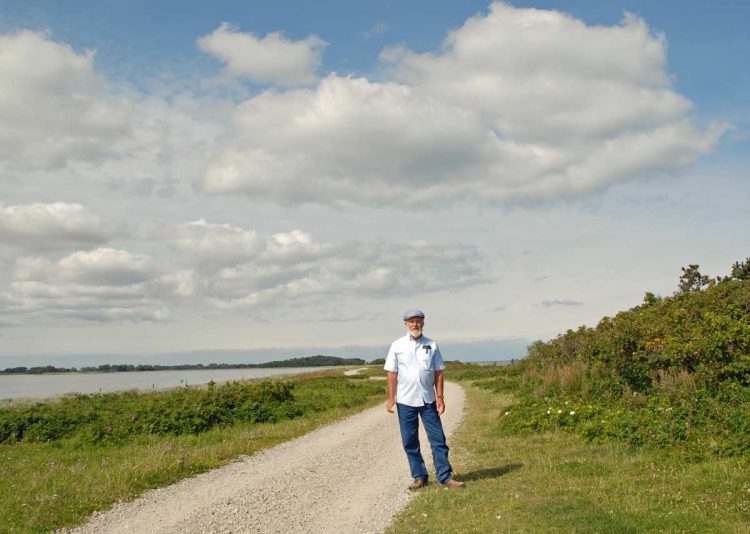 Odense Fjord is on the left and the Kattegat, over my shoulder to the right. Unlike the more famous fjords of Norway, the peninsula forming Odense Fjord is only a few feet above sea level. Nevertheless it has its own special beauty. 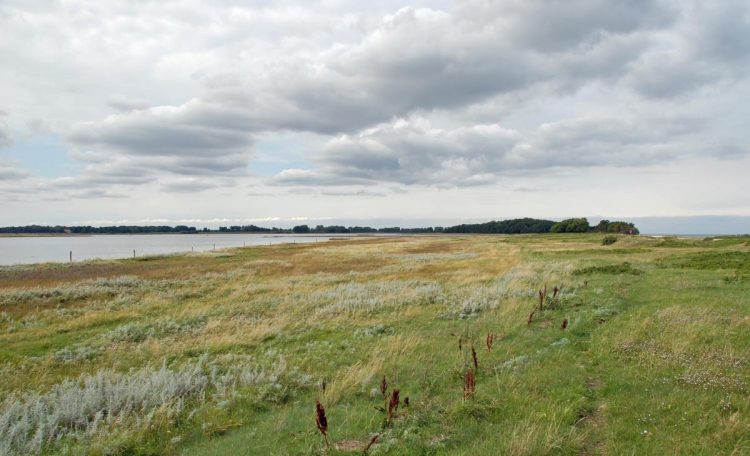 On my first revisit in 2005 I kept a promise that I had made to myself in 1966 to walk the entire length of the peninsula (over 12 km or 7 miles round trip). This year I decided to make the journey again. In fact I hiked back out about half way after completing the round trip. Again I succeeded (and I hope that I get another chance in the future)!

On the 27th of August I left Fyn to travel west onto Jylland (Jutland). My home there for the first three days was in the county, just north of the city of Silkeborg (an area which in my mind comes close to rivaling Fyn for natural beauty). I stayed at my favorite Danish B&B, Pension Holm Mølle. It is always such a pleasure to visit with the owners and hosts Dorte and Nils Kærn. I now count them as some of my very best friends in Denmark. Their B&B is located in the home of an old water mill in the hills east of the small town of Hinge. 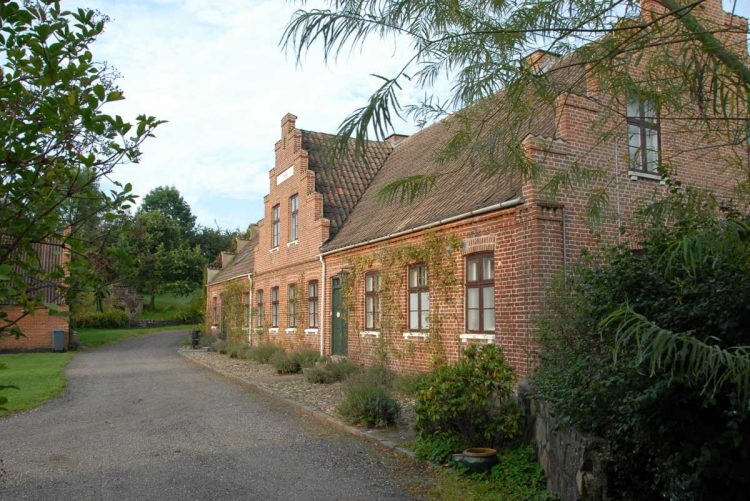 Besides the pleasure of visiting with Dorte and Nils, they offer one of the best breakfasts I have in Denmark. It always includes very special cheeses made at a local organic diary farm, Osteriet Hinge. There is a delightful hiking path that follows the millstream toward the Alling River. Along the way I get to visit the resident flock of sheep. 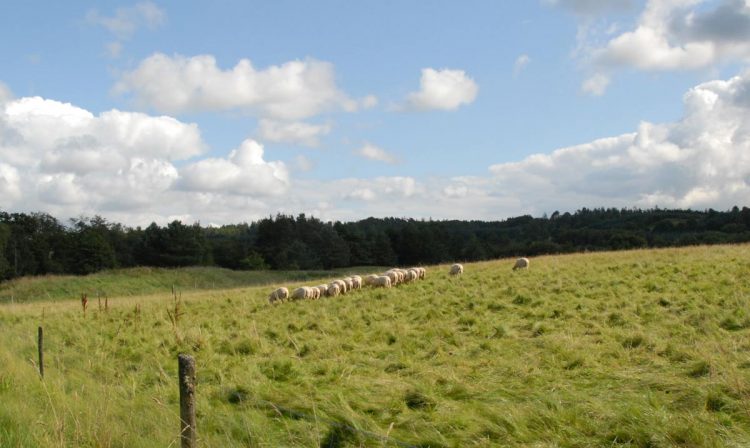 As an alternative I also love to walk the quiet country roads in the area, especially in the early morning before breakfast. Not too far to the west is a small herd of Galloway cows, who tend not to be at all interested in my presence. 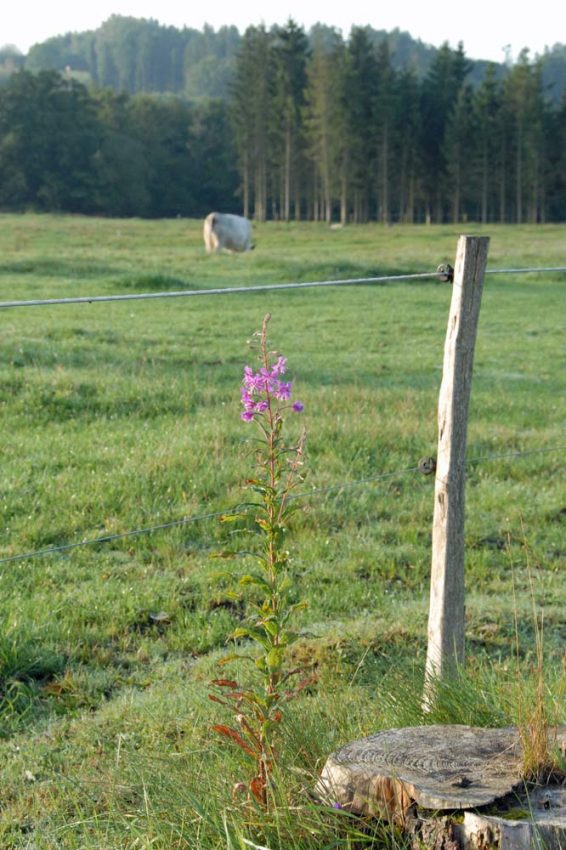 For my first full day on Jylland I traveled northeast and spent most of my time in Mols Bjerg National Park, in the area known as Djursland. Again a beautiful day devoted to lots of hiking, old castles and beautiful coast line scenery. The next day I returned to the Dollerup Bakke (hills), an area overlooking Hald Sø, one of the deepest lakes in Denmark. 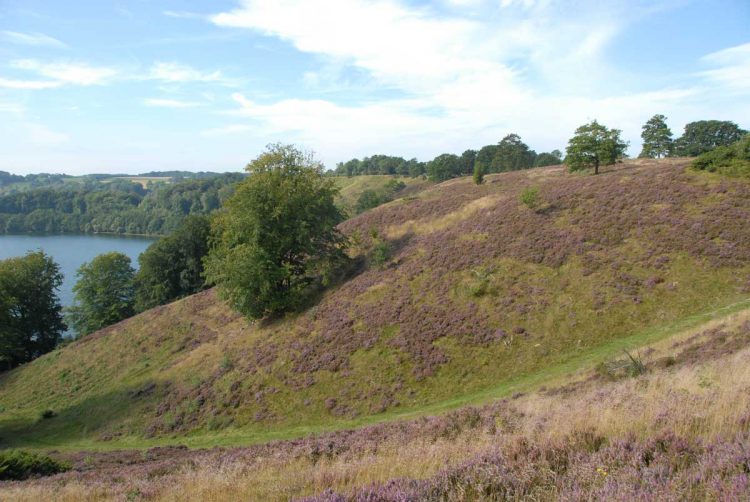 It is an area devoted to an ongoing restoration of the native health which once dominated the area. When first I visited the area sheep were being used to remove the invasive plants, later goats were employed, while currently the graziers are a herd of small horses. I am not sure how well the horses are doing in terms of preventing the trees and bushes to return, but the heath definitely looks the best that I have seen it. The heather was in full bloom and was quite dazzling. 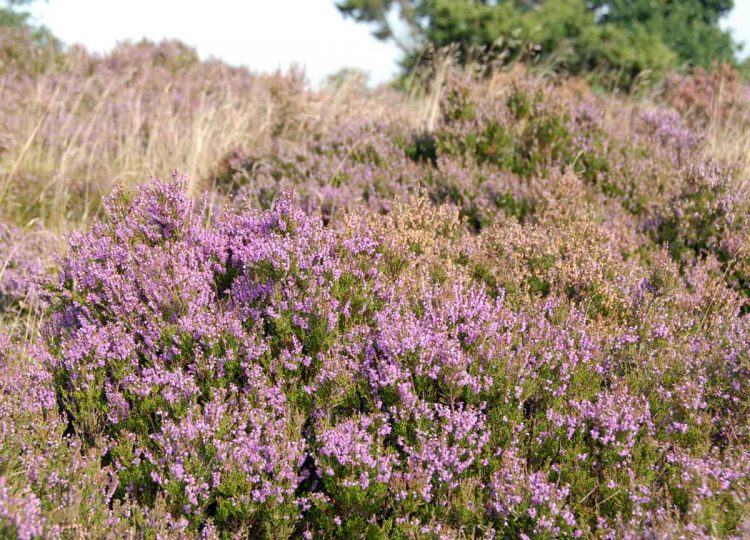 I spent my final afternoon and evening in Silkeborg, visiting with one of my oldest “brothers”, Axel and his wife KIrsten. We had afternoon coffee in their new home and later a wonderful dinner at a lovely restaurant next to the river in downtown Silkeborg. As always it is such a joy to spend time with these two. I truly feel like I am part of their wonderful family! 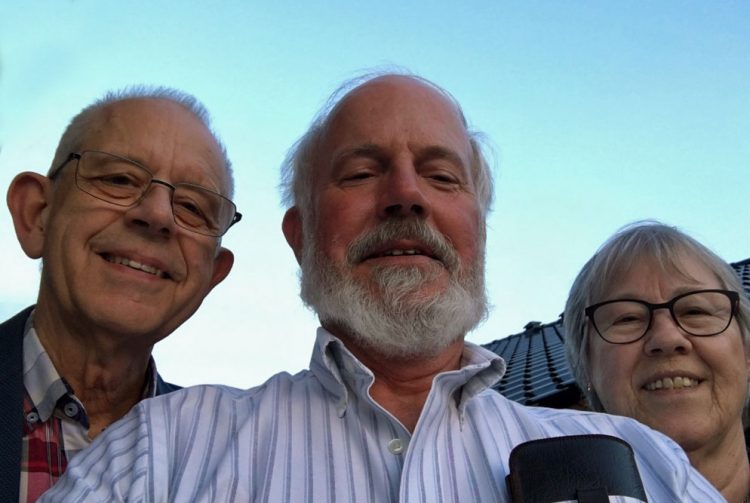 The next morning I would leave Silkeborg to travel south the the old town of Ribe. I will continue the journey with my next edition of the Ewe Turn. Thanks for keeping me company!