Slowly and somewhat steadily our large projects for the summer are getting completed. The weather has caused a lot of delays. (Painting is difficult to do well in the rain!) The gallery and the house are now completely repainted. The last of the major special works are 1) getting the barns repainted and 2) replacing the two most deteriorated posts which support the haymow and the barn above it.

I have the lower level of the barn cleaned out. The hay is nearly gone above the two weaken posts. The sheep are out of the barn during the day. In short we are ready to jack up the main beam in the barn and get to work replacing the posts. All we need now is the concrete contractor to show up and start work.

The barn painting history is an entirely different tale. On the first of June, Gary, from Roberts Brothers Painters called us. He would be there the next day to power wash the barns in preparation for painting. He arrived as promised and spent the day meticulously washing the main barn and the metal machine shed. The barn was in need of paint when we purchased the farm in 1983. Another 32 years of exposure to all types of weather made the barn even more paint free. However, once Gary got to work it was amazing how much paint (and dirt) came free. Here is Gary and his equipment beginning work on the southeast end of the barn. 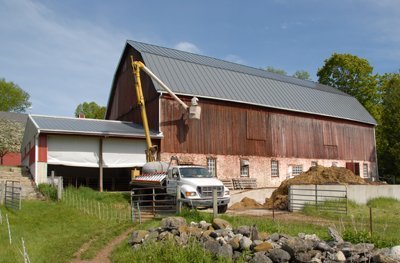 A day later, when the wet wood had dried it was truly a gray barn! Gary did not have any idea how far behind him the painting crew was, so we figured all we could do was wait for another phone call.

On the eight of June we had appointments in Green Bay. We left early in the morning and returned in early afternoon, ahead of a dark and menacing storm front. Much to our surprise on our arrival home we found a large crew painting both the barn and metal shed. It was nearly finished! The crew stopped work early, recognizing the intensity of the on-coming storm. Within an hour we were drenched by .6 inches of rain in 15 minutes. Most of the paint was dry enough to withstand the rain. The exception was the west and south sides of the metal shed. It would need an extra coat. The next morning the crew returned and the job was finished within another half a day.

The operation had lots of local spectators. It was obvious that the sheep were aware of the trucks and compressors around the barn, even though the flock was in the third pasture, nearly a quarter of a mile away. They spent more time watching than grazing. We have had at least one Whitetailed Deer fawn born close to the barns. We spotted the fawn and doe early on May 30th in a pouring rain. The fawn was only hours old. Since then the two have been all over the place. The day of the washing mom was in the maple grove next to the barns. I suspect the fawn was close by. Mom kept watch all day. 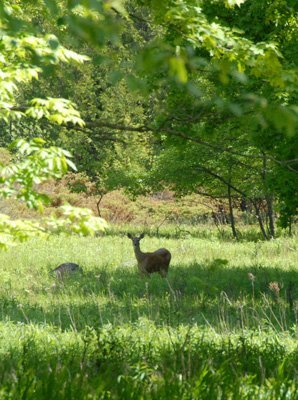 We have had sufficient warmth and sun that the paint is now dry everywhere. Here are the results. The appearance of the barns is totally changed. We are pleased with the job and with the way things look. Hopefully it will stand the test of time. 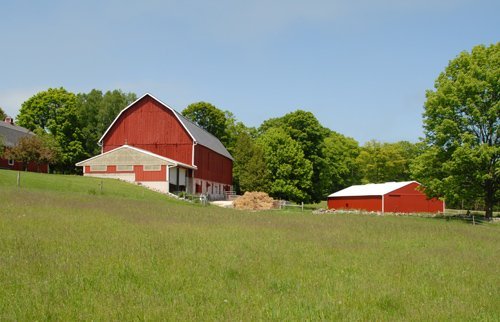 The barns are RED again!