Hello everyone! This is Brie. I thought I’d try this business of writing again. All sorts of interesting things have been happening, so I figured maybe you’d like to hear about them. When you are new to the business of being a sheep you are always learning something new. This week has been especially full of new experiences (at least they are new for me!).

Well first off, I have been to the end of the earth. Perhaps I should backtrack a little, so that this will make more sense to those of you who have never been there. We have been busy grazing nearly all the pastures. A while back we cleaned up the place the shepherds call “The Orchard”. Why they call it that I don’t know, as there are no trees there to speak of, but humans really do some odd things at times. But I digress…. After the Orchard we went to the first pasture, right outside the barn and then we moved on to the second pasture, just next to that one. I figured for sure the old shepherd guy would then take us to the third pasture. (I am finding out that he does lots of things that are excessively orderly.) Well he fooled me this time.

When we finished the second pasture, he opened the gate at the top of the hill and we headed west. The veterans in the flock started whispering about the big hay field that stretches all the way to the end of the earth. It seems, that at the most, we only get there once in a year. So here we are, grazing lush grass and deep alfalfa. It is hay the old guy usually cuts and bales for us. I don’t know if he is being nice to us or if he just ran out of energy trying to bale more hay in the heat.

We have been here nearly a week already and there is still lots left. And yep, we got to the end of the earth just a day or so ago. My mom told me about it, but I didn’t believe it at first, but there it was. The hay field stops at the bottom of the hill, then there is a solid line of trees and nothing behind them. It has to be the very edge! Just look; there’s nothing beyond the trees! 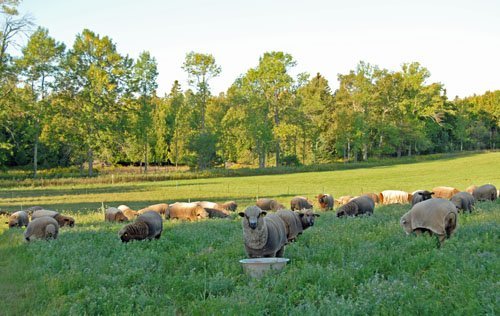 Just about every morning out there we have had the company of a pare of Sandhill Cranes. They are kind of stand-offish, so we don’t get to talk with them much. Usually they take off by mid morning, making all sorts of racket when they leave. Rumor has it that they fly to Denmark (wherever that is!), since that is somewhere east of here, but I don’t know for sure since the old bearded guy never takes us to graze there. We also have had a visit from a small flock of Canada Geese. The old timers talk about a time when one of them tried to teach us to fly (obviously unsuccessfully). I was hoping we’d have better luck, but I guess it is not to be.

So here we are in the evening at the end of the earth. It is getting dark and we need to get home…NOW! 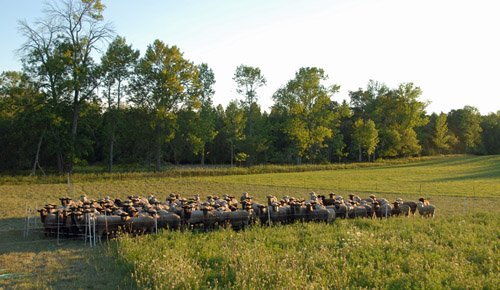 Waiting to return home from the end of the earth

It would be fun to fly back to the barn each evening, ’cause it is really a long walk. 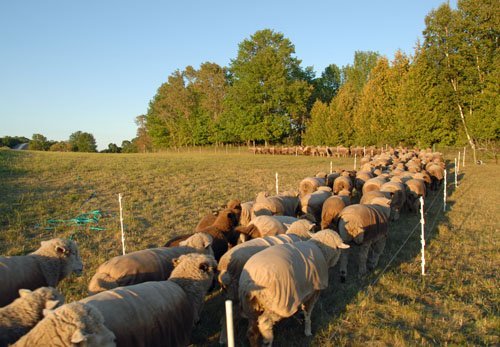 It’s a long way back to the barn!

However, we still outdistance the old shepherd. We make it back to the barn long before he does. That at least, gives us lambs time to goof around at the entrance and visit those sexy rams. Don’t tell anyone, but I am kind of partial to one of them named Axel. 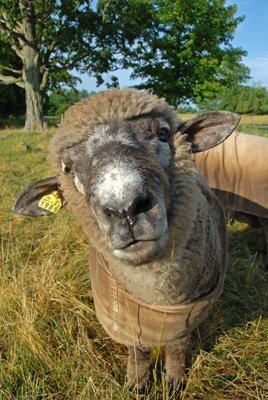 Perhaps I will get to know him better soon. Then I can tell you all about him. Maybe next time…