Once again the old shepherd guy has left the computer unattended. Consequently, we (i.e. Queso and I, Nanoo Nanoo) figured that we better get everyone up to date on the real goings on at the farm before the old guy finds out what we are up to.

In many ways fall has come early to the farm. Most of the deciduous trees turned to their fall colors ahead of schedule and have, by now, already dropped their leaves. From what we can see from the barn, there are still a few nice looking sugar maples and a couple of aspen. Nearly everything else is bare.

As yet it has not gotten too cold and therefore we have had no frozen water buckets and water lines to have the grumpy shepherd to worry over. Yet, despite all of the confusing weather we sheep still know it is fall. The rams get very testy with each other and when they do, they also get such a masculine odor. The shepherd and the nice lady think the rams stink, but what do they know? At least the two of them recognize that it is breeding season. As a result they have let the younger ewes join the rams in breeding groups scattered around the farm. It will be a couple more weeks before everyone is back together in the barn in the evenings.

Each year the shepherds decided who should be retired. This is now my second fall without being in a breeding group. I kind of miss not having a lamb to care for in the spring, but then it is also a lot of work. There are now quite a few of us on retirement in the barn during breeding. So we are having a grand old time being cared for in comfort. We also have this year’s 13 lambs with us. That keeps us young in outlook, even if we do not do some of the goofy things which lambs tend to do.

There are five breeding groups out on pasture. We have a pretty good idea of what is going on out there even without the shepherds telling us. Each group is close enough to the next that nearly all of them can pass along any news, which eventually makes it back to the barn. Rhett and his girls are closest to us. They get the best of everything: 1) the most handsome and sophisticated of the rams, 2) grazing on the lush pasture next to the road during the day, and 3) they get to come back into the newer wing of the barn overnight. The shepherd guy worries if they were out overnight so close to the road. Every evening Rhett and the girls bring us the latest news.

Next to Rhett’s group is Vermicelli and his goofy bunch of moorit girls. They are in pasture #4 (the place we know as the Rock Garden). We can converse with them in loud voices as they are still rather close. Unfortunately for them, they are in the pasture which always has the smallest amount of grass. The bearded guy has already taken them some baled hay as compensation. 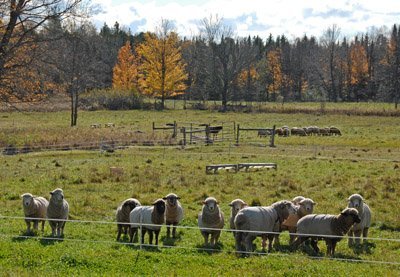 Ukiah’s group, with Stud Muffin’s in the distance

Next in line is Ukiah. He is in the first and oldest pasture. Currently they are near the south end, but are slowly working their way north. It is always a nice pasture: lots to eat and it contains the apple trees! Usually during breeding there are lots of wind-fall apples out there. But, the word is that most of them fell so early that the deer, raccoons and porcupines have already cleaned them up. There is always one tree that ripens very late. Ukiah’s group is hoping that they get there soon. It is difficult to get any fire lit under the old shepherd; he keeps telling them that they need to finish grazing where they are before he will move them.

Beyond Ukiah’s group you will find Stud Muffin and his gals. They are in the second pasture; we call it Queen Anne’s Pasture because it always has so many Queen Anne’s Lace plants. Stud Muffin’s  is about as far away as any of the groups. There are no sheep in that lush third pasture to the south. The shepherd guy fusses about it being too close to the cedar swamp where all the coyotes hang out. 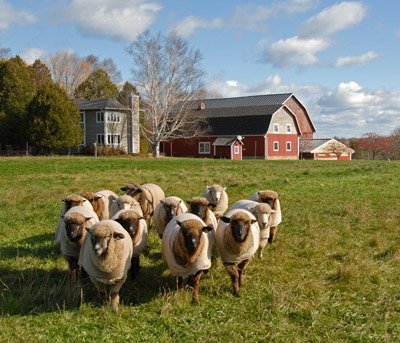 Ulmer and his gals

The final group of ewes is with Ulmer. They are up on the high ground where the cherry orchard used to be. It is really good pasture up there, but it can get a bit unpleasant if the wind picks up and it is cold, since it is completely out in the open. We hear rumors that the grumpy old shepherd decided to put Ulmer in that pasture this year because the ground is smooth up there and it is more difficult to get your legs tangled up on a big rock. You have to realize that it was Ulmer who wacked the old shepherd last year during breeding. He still remembers that, I can guarantee! 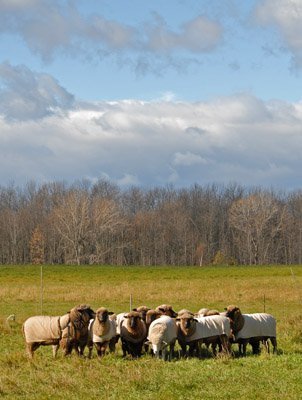 Ulmer and the girls in “The Orchard”

So there they are, all the breeding groups. After nine days more than 60% of the girls have been marked by the crayons the rams wear. That should be a good sign as it hopefully means they are now bred. Now we just hope that the rest of them get the job done before the weather turns cold! We figured out that the Gallery is already closed for the year and that the Bed and Breakfast must also be closing soon. We had our last visit from all the nice visitors a couple of days ago and now there apparently are not going to be any more for a while. The nice lady was telling Queso that she was about to leave for SOAR, which stands for Spin Off Autumn Retreat. She hopes to learn a bunch of new things that she can do with our wool. She should have fun. She also hopes to meet up with a bunch of people who buy our fleeces each year. Queso asked her to say “hello” from all of us. I just hope that we can put up with the old grumpy guy for over a week. We will try to humor him, but who knows….