Catching up with a Fall that is nearly gone

It is difficult to believe that we are nearly finished with fall. Despite the difficulties and stress that the Corona virus has dished out to us, life at Whitefish Bay Farm has rattled along rapidly and as peacefully as we could hope. We have greatly missed the interaction that we would normally have experienced with our B&B guests and Gallery customers, not to mention family and friends. Like us, our sheep are showing their advancing age, but, also like us, they are still doing pretty well. We lost one of our ewes, Yummy, to health complications partially age related, but otherwise the rest of the flock made it through the grazing season and have now moved into the barn to spend the winter in relative comfort.

In September we grazed pasture #3 for the last time this year. That pasture is probably my special favorite. It is located in the extreme southeast corner of the farm. It is the most isolated and quiet pasture that the sheep graze. The soil is especially rich and that has benefited our efforts to grow a very good mix of grasses and legumes. I am especially happy with the success we have had in establishing a vibrant growth of trefoil. Because of its location, it is also the most peaceful pasture that we graze. It is always special, setting up fencing, knowing that I will often encounter wildlife each morning. It also is a very beautiful place. This image is from late September, the second to last day for the sheep to graze #3 this year. 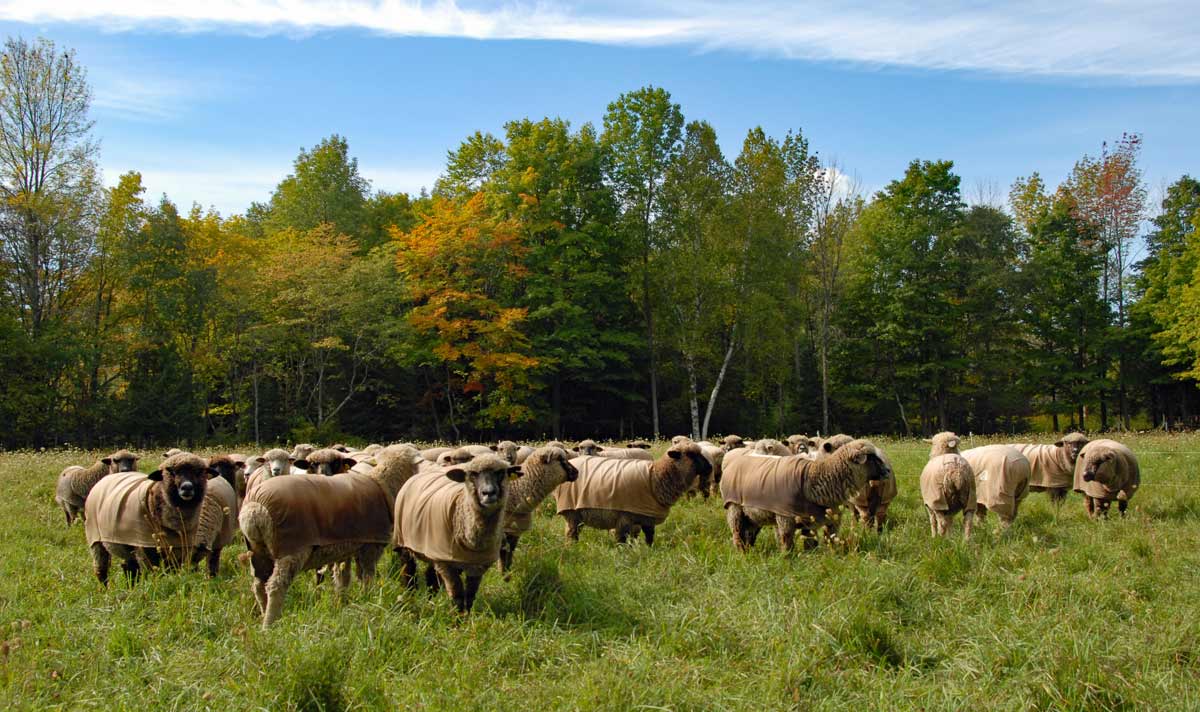 Much of the pasture is surround by trees, both deciduous and conifer. In the fall it is usually a great collection of fall colors among the trees. When this picture was taken one of the few beech trees growing on the farm had already started to show some great coppery orange.

Just under 3 weeks later most of the deciduous trees were displaying wonderful fall colors. By then the flock had moved on to another pasture. This is what the west end of #3 looked like in early October.

The trees with color include beech, birch, maple and ash. Sadly, in this year of health crisis, this picture will probably never be replicated. The damage being done to our native ash trees by the invasive emerald ash beetle was finally apparent in this pasture. Most of the burgundy and yellow colors in this scene are the contribution of the ash trees. This seems to be the last area of the farm to experience the damage and death caused by this alien insect. There are just a couple of trees which can be seen which have already lost their leaves and are dying. Next year this will be quite a different scene. I suspect that most, if not all, of the mature ash will be dead by then. We have already lost nearly all of the ash in the western 20 acres of the farm, an area which is predominately ash and cedar. That woodland is now full of dead ash skeletons. I will especially miss this view next spring. It is ironic that the the year 2020 has produced so much trauma and so many different tragic deaths, both human and otherwise.

After finishing with pasture #3, the flock moved to the pasture nearest the house, the pasture we know as “the orchard”. By this time, mid-October, the trees were displaying especially brilliant fall colors. Two weeks into October and our maple grove was glowing!

The presence of the flock, close to home, was especially comforting. It is always nice to “share breakfast” with them when they are so close.

Ten days after this image, we experienced a rapid decrease in temperatures. Strong winds removed much of the fall leaves from the trees for a drastic change in appearance. With a run of days when the temperatures dropped to 20°F (-7°C), the waterlines to the pastures froze up. With no warmer temperatures in sight, we decided to call a halt to the grazing season for 2020. October 20th was the flock’s last day on pasture. Ironically things warmed up again in mid-November. But by then I had managed to get the pasture pipes shut off and drained. In addition all of the portable fence equipment was collected and stored away for the winter. We could sense that the flock was probably just as happy to remain in the barn. Weather conditions inside were more pleasant and the quality of the grazing forage outside was much less after the hard frost. Now it is up to the two of us to get into a winter routine, which is going to be decidedly different than we have experienced before.