The seasons here have been so late and slow to develop. First, our spring was delayed, cool and wet. Plants did not seem to want to germinate or grow. By the time we reached summer on the calendar things were barely green. But slowly they came along. Vegetables that needed warmth to develop just seemed to wait for warmer days. Finally, we experienced a period of warmer weather. But it did not last long enough to convince the garden it was summer. For example, the tomatoes were lush, big plants with green fruit that refused to turn red. So here we are in late August and just now are we beginning to see red in the tomatoes. The same holds true for peppers. Our bed of cosmos, which are supposed to provide us with blossoms to be used in dying projects, have barely begun to bloom.

I have been struck by the lack of so many varieties of insects this spring and summer. I have already written about the almost total absence of Monarch butterflies. But they are not the only species missing. The various varieties of Swallowtails are present, but in smaller numbers. At least we had a few Tiger Swallowtail caterpillars on our parsley plants (which we happily shared). The usually common Tortoise Shells, Mourning Cloaks, Painted Ladies, Buckeyes, Question Marks, Commas and a host of their near relatives are not to be seen. In a normal summer I can count on the local nettles to be host to large numbers of Tortoise Shell larva. I have yet to see one! The same holds true for moths. By now I would be regularly removing Hornworm caterpillars from the tomatoes, but this summer they are totally absent! The combined strange weather of last winter and this spring and summer has been playing a cruel hand to many creatures.

Seeming one of the few successful butterflies of the season are the Great Spangled Fritillaries. They seem to have the flowers almost all to themselves. The following examples from our Coneflowers and Blackeyed Susans are ample proof. 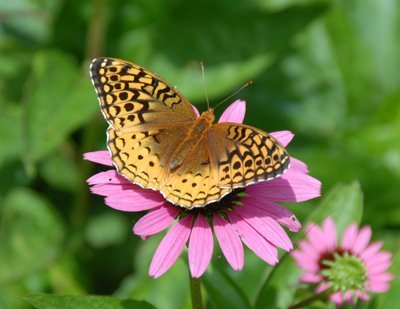 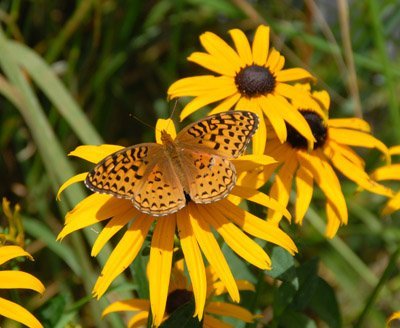 Despite these disappearances, we still cannot complain too much. We have at least received enough rain to keep the pastures green and growing. It is the first time in a good number of years that we have not had to rely on baled hay to get the flock through a period of drought during the summer. As a result the sheep seem happy and content, except perhaps when it is time to head out to pasture first thing in the morning, when, try as I might, I cannot get their new pastures ready for them soon enough.

Almost as an extension of things not developing timely, we too have been guilty of not looking after the flock in terms of their wardrobes. Many of the sheep had become overly tight in their coats, many of which were also in need of repair. After a marathon session at Gretchen’s sewing machine the repairs have been made. We spent the better part of an entire afternoon replacing coats. It is nice to see everyone in fresh clean and fitting coats. They do look especially nice on pasture as a result. 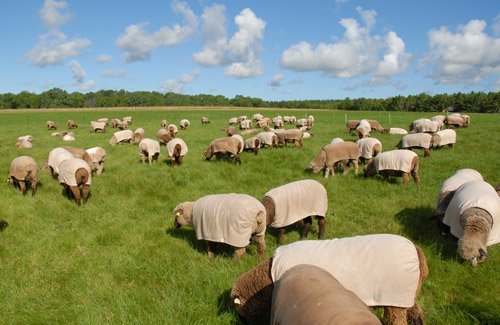 Changing coats also proves just how much this year’s lambs are growing. All of them are already in the second size since they first received a coat, and some are into the third size, which is still being worn by some of our smaller adults! In addition, most of the lambs have taken especially well to visits from our guests. Here is Martha (a guest) sharing a self-portrait on a smart phone with Collette (a lamb). I am not sure which one is having more fun! 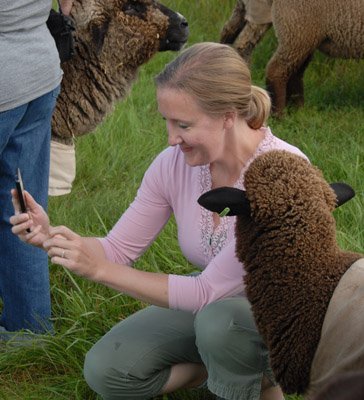