Coming out of Hibernation

The Ewe Turn has been silent for a very long time. It is time for us to come out of an extended hibernation and rejoin the rest of the world. We have spent the better part of a year purposefully in a bit of isolation, due largely to the Covid pandemic. For the two of us, Pussa the Cat and the entire flock, it has been a peaceful and quiet time. The B&B has been effectively closed for over 2 years now. It is now officially closed, as we have not renewed our license and stopped all advertising. The Gallery has also been closed for that same space of time, but we have retained an online presence, albeit a much smaller one, selling our fiber products on a limited basis. We have missed our contacts with the friends that we have made over the years in the B&B and Gallery. However, the time off has been relaxing and quite restful.

When the last Ewe Turn was written a year ago, we had just completed shearing the flock and were in the process of preparing the fleeces for sale. The fleece sale went well; all of the fleeces were sold within just a couple of hours. For that we are always eternally grateful to those of you who have supported us and the flock with your purchases.

Last spring the flock was able to begin grazing in early May. This was the scene of their first hours on pasture. As always, they seemed glad to be out in the sunshine and feasting on lush green grass. 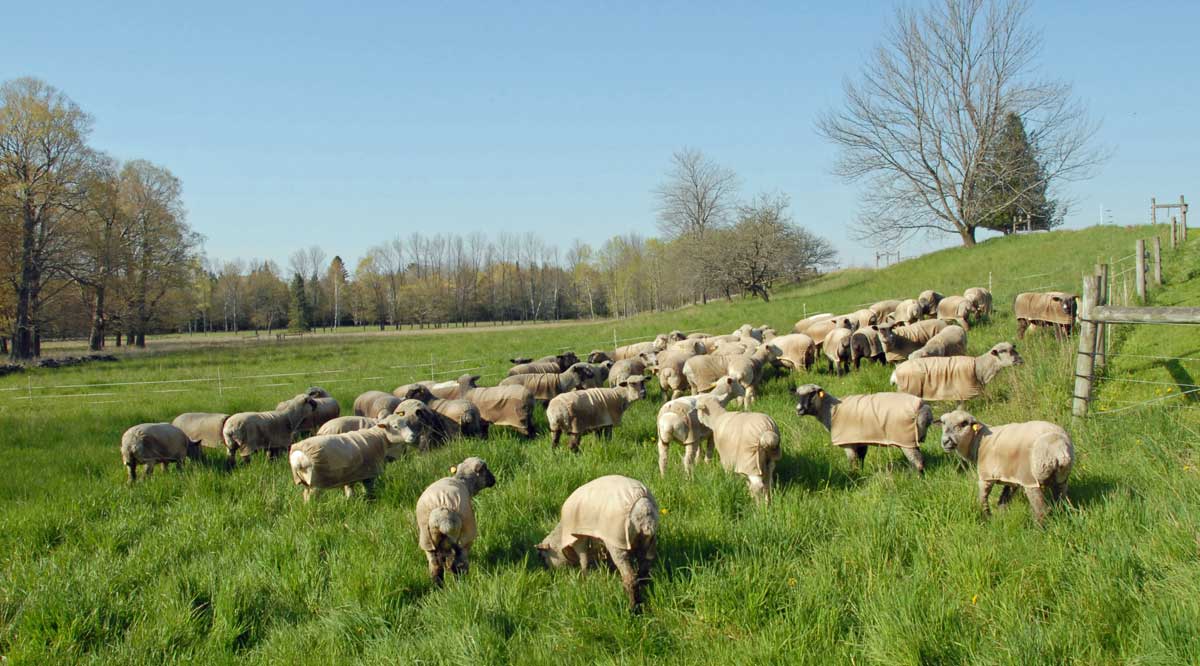 At this point the flock was smaller in size, as we had lost some over the winter, largely due to the complications of old age. The small flock size proved to be a challenge for me. Fewer sheep were grazing than I had been accustomed. In addition their advancing age means they tend to eat less than a comparable sheep of a younger age. I had to learn to adjust the size of the day’s pasture so that they did an adequate job cleaning up. This means that they move through the pastures at a slower rate than in the halcyon days of a larger flock accompanied by numerous lambs. By the end of the gazing season we had managed to work our way through three pastures a couple of times, as compared to at least five pastures in past years.

During the spring and summer we made other physical changes to the farm. We chose to replace the aging sign on the road with a new one. It reflects the permanent absence of the B&B and Gallery. 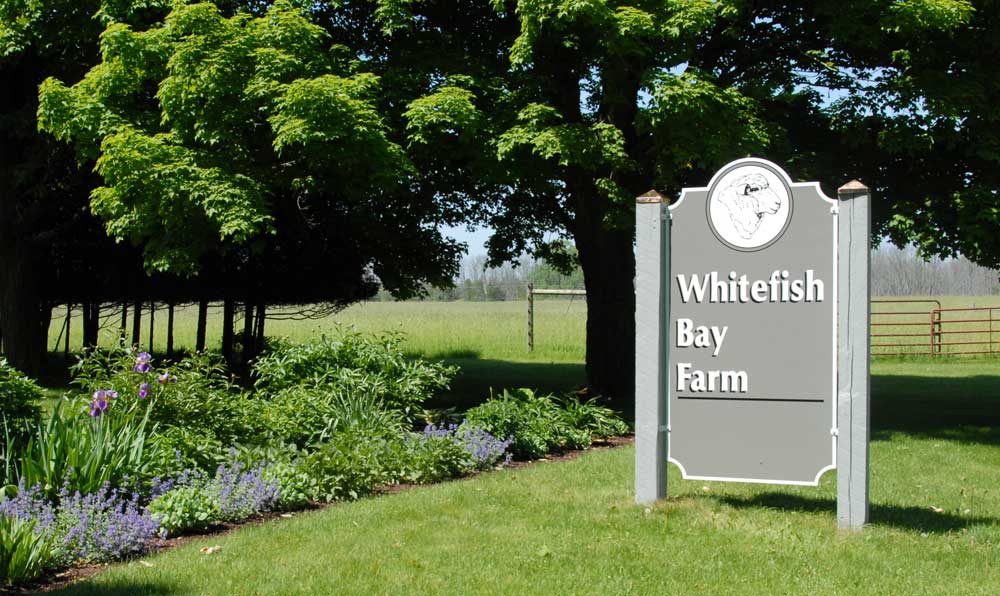 In 2020 due to severe weather we lost the lovely clump of cedar trees that stood between the house and Gallery. We opted to start with a new planting scheme as a replacement. It consists of an upright magnolia tree surrounded by new flowers. The planting was completed in late 2020. By mid-summer of 2021 it presented itself with its best appearance. 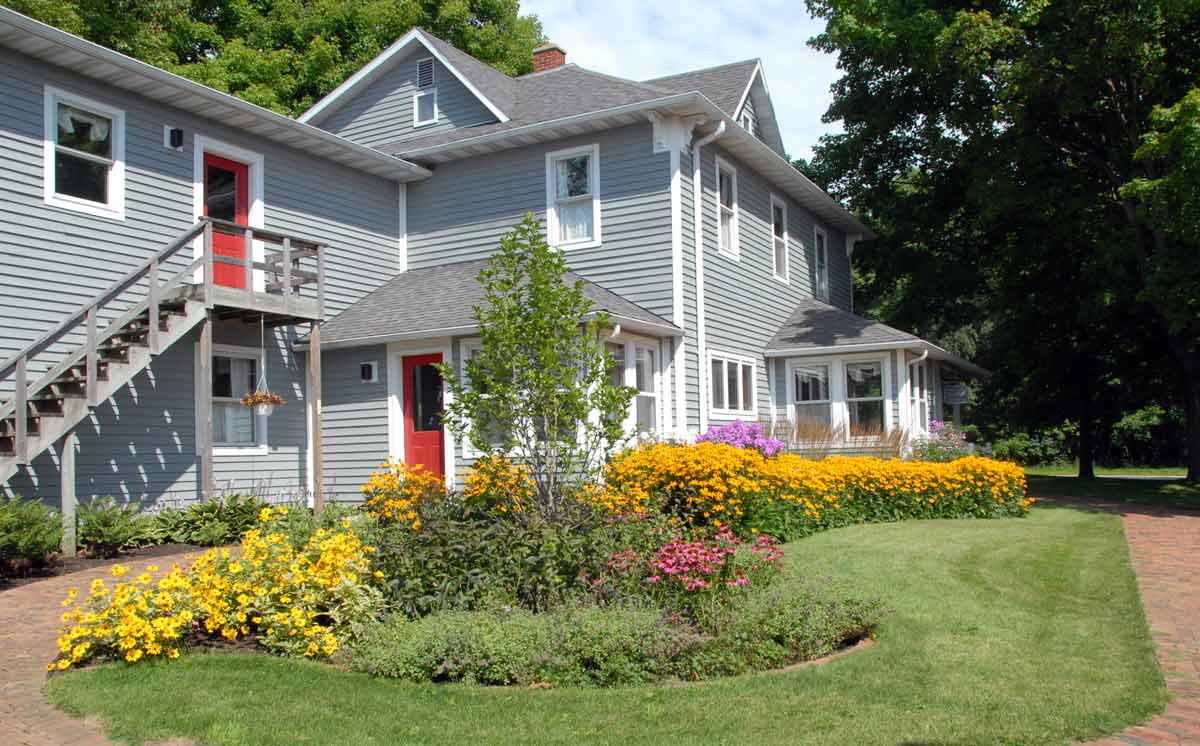 We were hopeful that it would add to the view both from inside and outside the house. As I write that hope may be challenged this coming spring. Over winter a small army of cheeky deer and rabbits decided that much of the planting tasted better than the plants which were advertised as not being on the deer favorite list. We will have to see what survived and adjust plantings accordingly!

We had one last batch of mill-spun yarn which we hoped to naturally dye last summer. We do not believe that we will be able to get another similar batch of yarn spun in future years, because the continuing reduction in the size of the flock and the closing of our preferred woolen mill. The weather this last summer was not often conducive to dyeing, but by late summer, Gretchen managed to get a large batch of yarn dyed. It was a beautiful collection. We have opted to keep the large majority of it for our own use in weaving projects. The remaining yarn sold off in a couple of days, before we could even get it posted to the website.

By fall, the flock was well into the final days of grazing for 2021. Here they are in September, at the north end of the “Orchard” pasture (right next to the house and Clark Lake Road). They were having a hard time keeping up with the growth of pasture. From here they still had half of the pasture to graze and then all of Pasture #1. The weather allowed for comfortable grazing through October. The final day on pasture was October 24th. 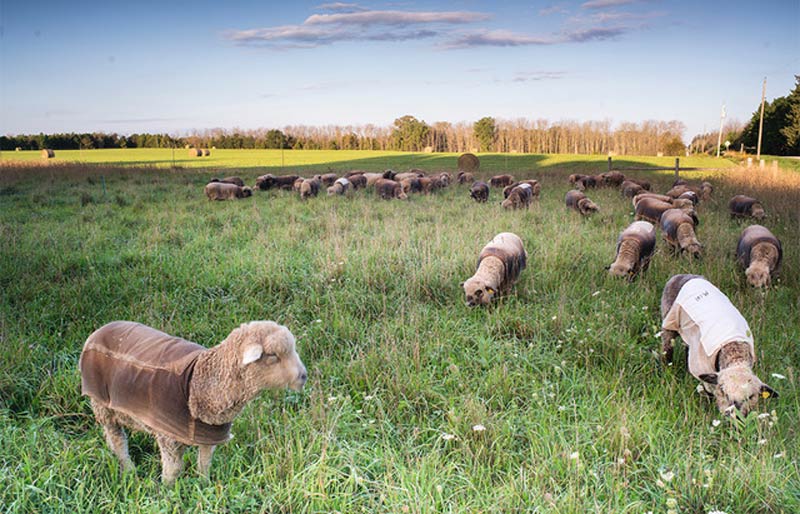 It has felt like a long unending winter for all of us. It has been cold here, with very little snow cover. In addition we received a thick ice cover in early December which did not completely disappear until very recently. I am sure that the flock and the two of us will be very glad to enjoy signs of spring , warmth and new grass.

Shearing was a couple of weeks late this spring, due to the weather and the arrival of a new member of our shearer’s family. I can guarantee that the flock was happy to get rid of just over a year’s growth of wool. This is a view of the flock the day before shearing. 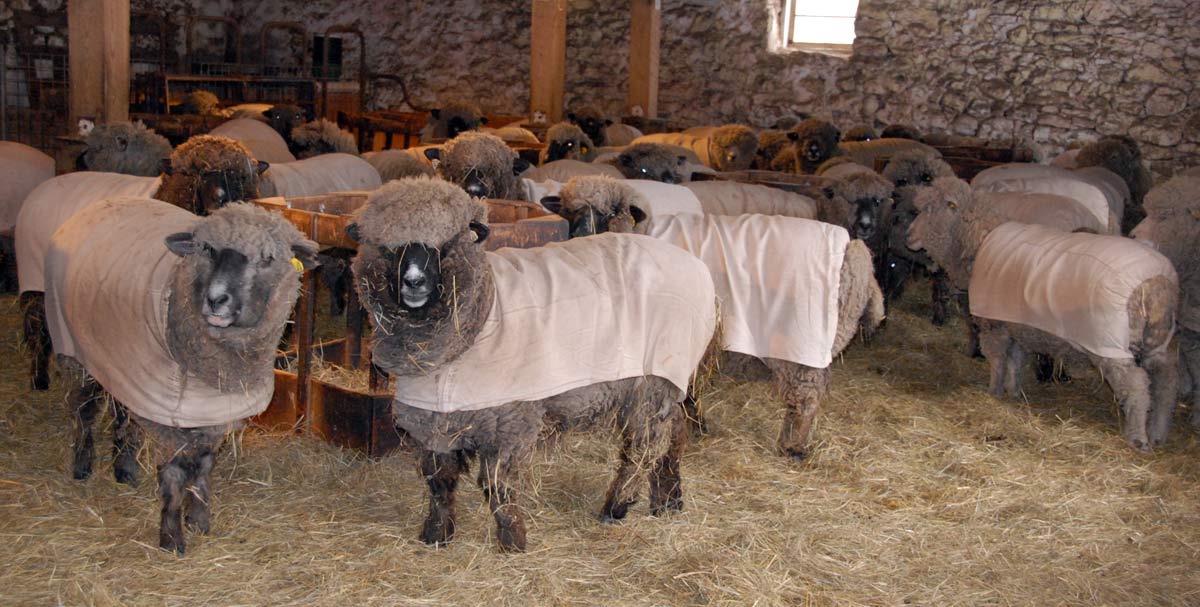 A number had already had to have their faces trimmed up a bit just so they could see well. Vespera manage to avoid the early face trim despite the fact that she needed it. 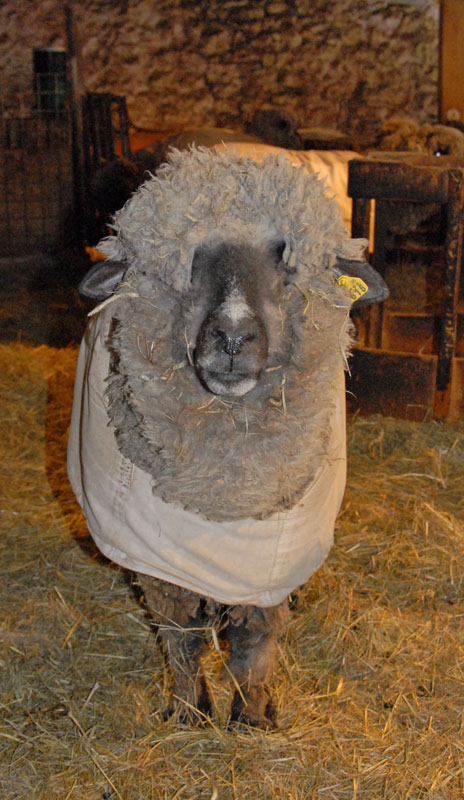 A day after shearing was completed, everyone was outfitted with smaller, clean coats. Sadly, the weather also turned colder again, so it has taken a while for everyone to adjust to the temperature change, sans fleeces. 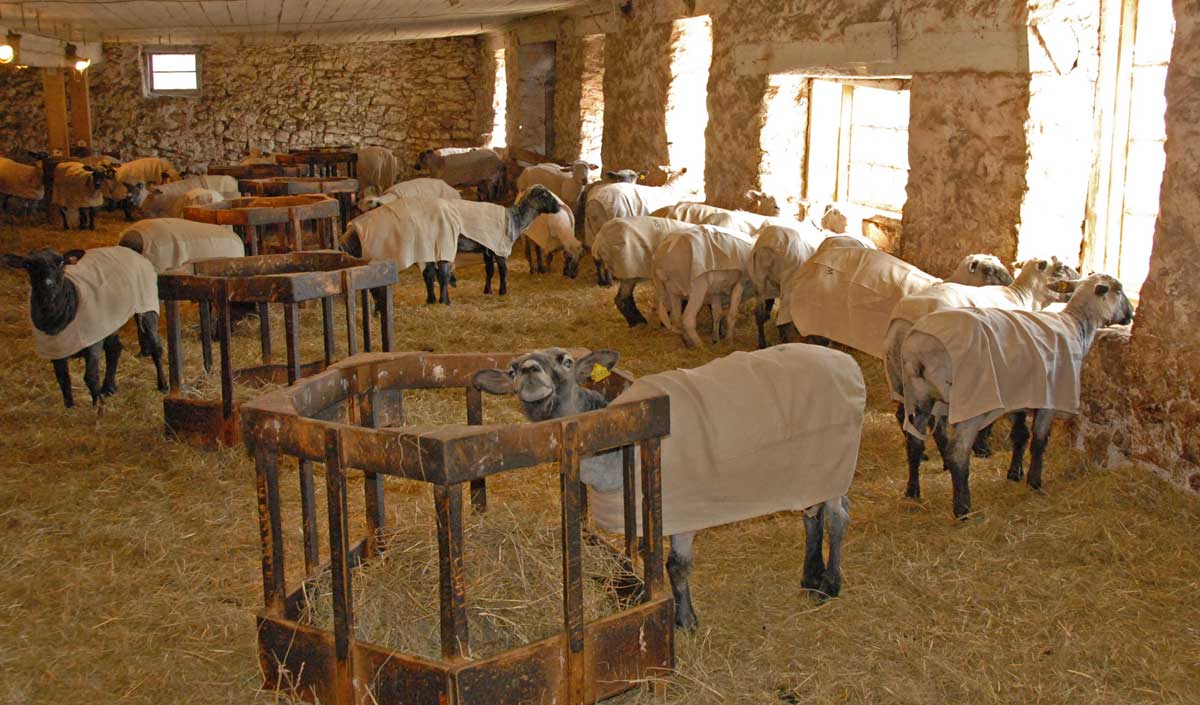 At least there was nice, warm sunlight coming through the east facing windows each morning for the first few days after shearing. Nearly everyone lined up to catch the warmth one they finished breakfast. 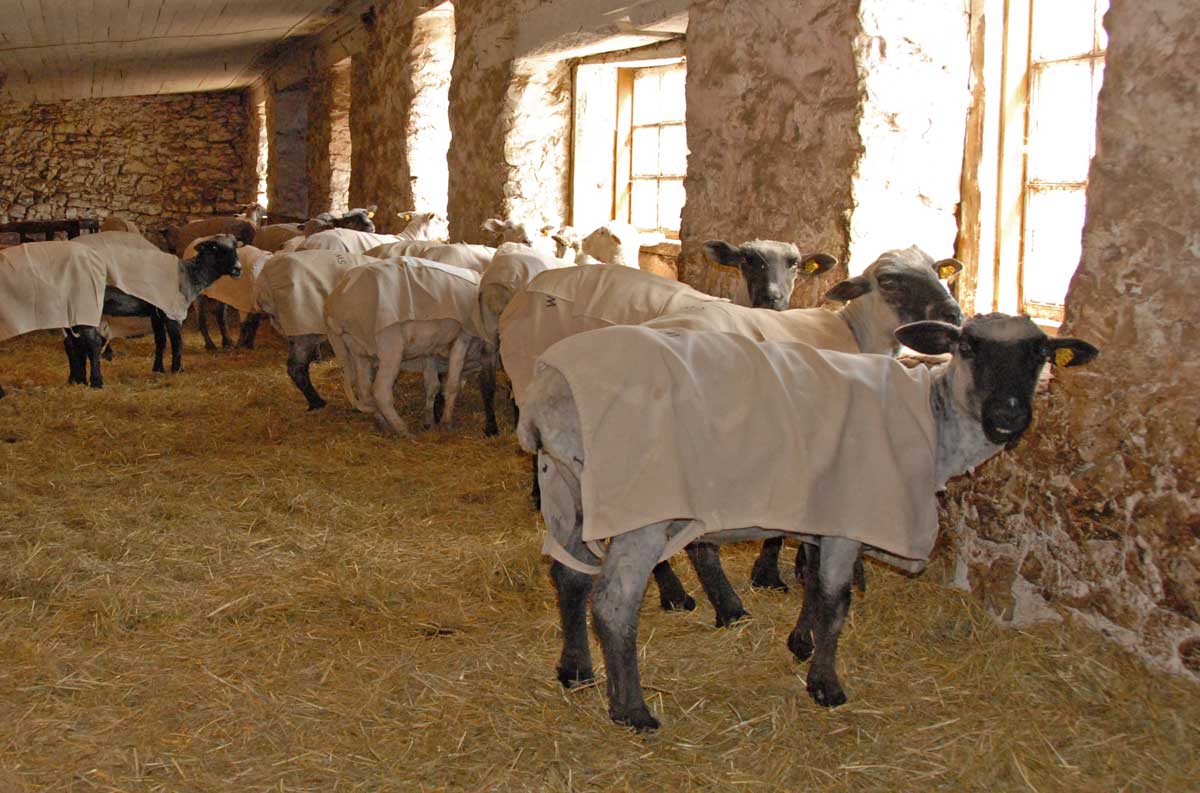 For those of you who are interested in purchasing fleeces, we hope to have all of the fleeces skirted, weighed and rated by mid-April. If you purchased fleeces from us over the last couple of years, or if you signed up to be on our mailing list, we will be sending out emails a week or so before the online sale date, providing the date and time of the sale. We will be in touch soon.

Lastly, thank you for staying with us during our “hibernation”. We promise to return more frequently in the future.