I am back at Whitefish Bay Farm. Very few probably knew that I was gone. There were some exceptions: a few neighbors who did not see me doing chores; the sheep who were totally dependent upon Gretchen for pasture and food in the barn; Pussa, who lacked a breakfast companion and a lap upon which to sit; and Gretchen who had to deliver me to the airport and subsequently fetch me there. For the rest who did not know of my absence, I was in Denmark. As has become my custom, I travel to Denmark every other year. The trip constitutes my major vacation and only significant time away from the farm. It is an opportunity to visit friends and adoptive family. It is also my only chance to listen to and speak Danish. In a sense, it is like going to language camp. During the first few days there, my ears are not well tuned to the language and my mind does not want to function, except in English, consciously translating individual words here and there. That is an especially frustrating time, knowing that much of the language is locked somewhere in my head but the keys have been misplaced. Before the end of the twelve days I know that I am again thinking “på dansk”, albeit in a much simpler mode than years gone by.

When I left the farm, conditions were extremely dry. Pastures were turning brown and our gardens cried out for more watering. With the exception of Pasture #3 the sheep had grazed every other pasture that we could get them to and none of those pastures had regrown at all. In short, we were rapidly running out of fresh green food for the sheep. We had six large square bales of hay left over from the previous year. I set up the bales so that the sheep could feed upon them three at a time. Past experience taught us that three bales would last from three to four days. Once all six bales were consumed the flock would begin rotating through Pasture #3. The responsibility for assessing hay supplies, moving fences and feeding the sheep at night were totally Gretchen’s. 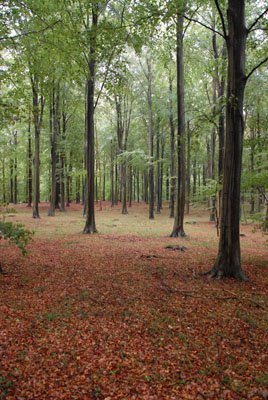 The contrast in Denmark was startling. The country had already experienced the second wettest summer ever recorded and the rain was continuing into the fall and my vacation. The words wet, green and lush best described what I found there. If you wished to grow mushrooms or snails, conditions were ideal. If you wish to combine grain crops or mow grass, conditions were a quagmire. 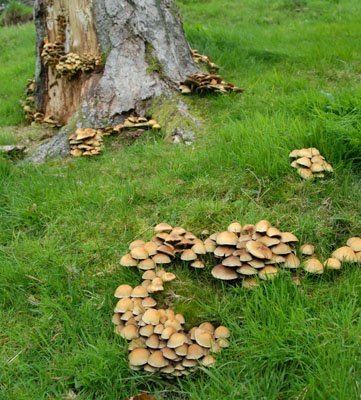 As I tend to do, I kept my eyes open for flocks of sheep. What I saw was that life was often not very pleasant for lots of extremely wet sheep.

At least toward the end of my travels the sun decided to come out for a few days. It permitted me to spend a day hiking the caulk cliffs of Møns Klint and another full day looking at and learning about the beautiful ships at the Viking Ship Museum in Roskilde. Much of the rest of my time in Denmark was spent dressed in rain gear outside or in drier conditions indoors, primarily in museums. Early in the trip I was extremely pleased to discover that a very dear friend from many years past had an exhibition of natural dyeing of wool and silk using wild mushrooms (Svampfarvning) at the Silkeborg Museum. The colors she achieves are breathtaking. If you happen to be in Silkeborg now and into early October, it is exciting to experience Kirsten Kielmann’s exhibit. 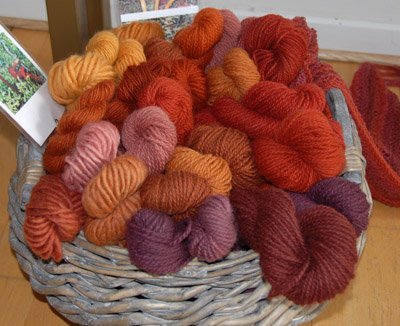 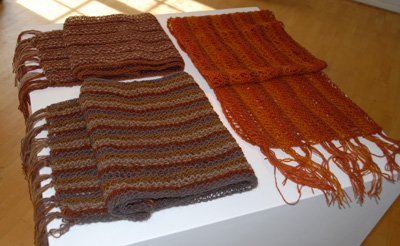 Communication has changed so dramatically since I lived in Denmark in 1965-66. At that time, it took ten days for a letter to get from Denmark to the US. Phone calls could only be made by scheduling them a day or two ahead of time. Now with a cellphone I am able to talk with Gretchen every day that I am in Denmark. It was because of that communication that I was pleased to learn that after I had been gone a week that it began to rain here at home. In eight days we received over 4 inches of much needed moisture! Before the rain began, Gretchen and a friend, Sandy, spent a couple of intense days dying lots of wool yarn. They lacked Kirsten’s mushrooms, but instead got wonderful results using amaranth, madder, marigold blossoms, indigo and birch bark. 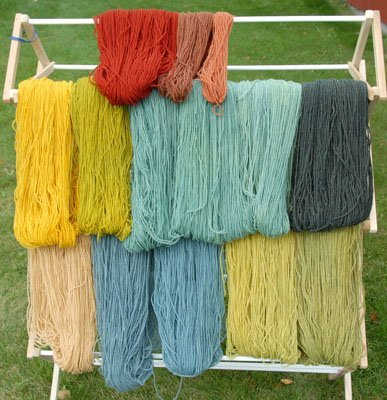 I have been home now long enough that the effects of traveling for nearly 24 hours are finally wearing off. It is wonderful to see how green things have become here. The contrast with many of the trees that are already turning to their fall colors is dramatic. I already miss my family and friends in my adoptive home, but it is extremely good to be back to my real home with the flock, Pussa and especially Gretchen.