Since last I wrote, life here grew extremely hot and dry. On July 8th the sheep began grazing in pasture #3, the five acres in the far southeast corner. One of the advantages of this particular pasture is that it affords a bit of shade for the flock every day that they are there. It is also one of the most productive of our pastures. This time, when we began grazing #3 , I was very pleased to see that the forage was deep enough that it had retained moisture better than many of our pastures. It was lush and green, albeit a bit shorter than I would have liked.

One of the pleasant surprises of this year has been how well most of our legumes have been holding up. The lack of protective snow cover in the winter, followed by early warm ups and subsequent freezes were all a worry. Add to those conditions the limited amounts of rain this spring and summer truly threaten the overall welfare of the pastures. These are also prime conditions for stressed plants to be subject to greater than normal insect damage. Our alfalfa crop was hit early by leaf hoppers and was significantly defoliated. Not so the trefoil! It seems to have thrived, especially in #3. 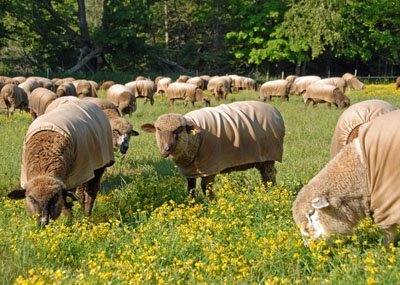 The sheep attacked #3 with gusto, starting on July 9th. The yellow blossoms of the trefoil were especially attractive to the sheep. After the first day of grazing I was gravely concerned that the flock was cutting the pasture down too short. The next day’s allotment was therefore larger, but the extra portion seemed to make no difference. I also knew that when we finished #3 we would have no additional pastures to graze, as nothing had regrown in the heat and drought. So we plugged onward.

By the 19th of July we were down to two segments of #3. That morning, out of nowhere, we got 4 inches of rain. In two hours it rained more than it had in over 7 weeks! It would have been nice had it been a gentle “soaker”, but we are not complaining! 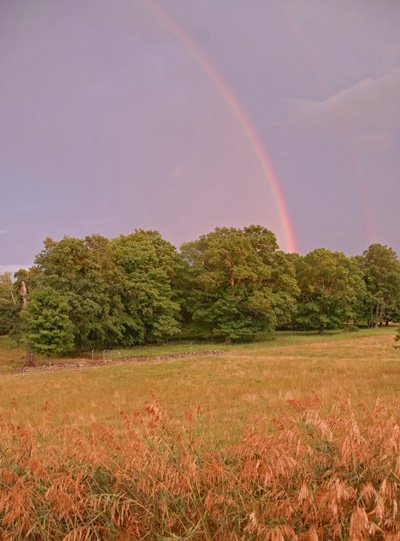 Prior to the rain, we managed to locate a supply of large square bales of hay. We had taken delivery of the first 6 bales the night before the rain. We had an option for enough additional bales to get us through as much as 8 weeks without grazing. Even with the rain, by the last full week in July, there were no pastures ready to graze. Since the 23d, the flock has been eating (reluctantly) large square bales plopped in the middle of #4. The flock definitely has a taste for home gown hay, be it on pasture or baled. Hay from elsewhere just does not taste as good. So here we are, still in #4, still eating baled hay. 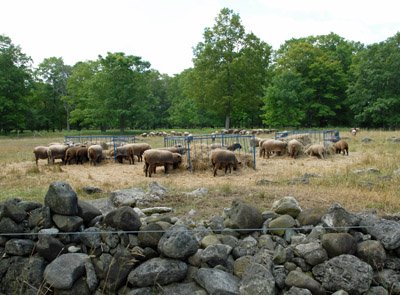 Eating large square bales on what was left of pasture

Two days ago it rained another half an inch. The combination of the two rains over two weeks, plus temperatures which are decidedly cooler (i.e. highs near 70°F or 21°C), has gotten the pastures to start growing. With any luck we may get back onto a grazing schedule once the girls have cleaned up the current group of three large bales.

We are extremely thankful that we have manage to survive brown pastures and very hot temperatures. The last 18 large bales were delivered yesterday and are now safely protected in the machine shed. It was a bit bizarre unloading them as the pastures now look so green compared to a week ago.

We buy hay; it rains; everything turns green

Hopefully the bales are security for the future feed wise.