After what has been a bizarre couple of weeks we are able to return to the blog. The delayed return is ultimately weather related. In early April we were experiencing unusually mild spring weather, when suddenly we were hit by a heavy, wet snow. One of the results of the wet snow was a series of rapid and repeated power outages due to numerous over-laden tree branches shorting out local power lines. For whatever reason, those outages caused damages to our computer. The timing was exceedingly poor as we were fast approaching the on-line sale of our fleeces. Notices had been sent, customers were waiting and the computer began to die a slow, fitful death.

For those unfamiliar with the annual sale, it is a very intense and rapid event. (It has been described to us as, among other things a “fleece feeding frenzy” and a “bun fight”.) In good times, close to 130 fleeces sell within less than 36 hours (most of them within the first 4 hours). We decided to plug on with the sale on the 14th. We were already relying upon a back-up email system on an overworked, geriatric second computer. We managed to struggle through the first hour of the sale and then had to update the web-site to reflect the fleeces that had been sold. One change went through and then the computer took its last breath and died. From that point onward the sale involved larger numbers of emails and phone calls describing what was still really available. We eventually got a hold of the folks who run our ISP. They were at a conference out West, but were at least able to get the website updated again for us by the end of the day.

The next day Gretchen drove to Green Bay, purchased a lap-top PC, which, by the next day, we had running well enough to take back control of the web site. All the fleeces were sold and our thanks and great apologies go to all of our fleece buyers for their patience during the affair. During the next two weeks we have managed to purchase a new main computer and get a crash course in Windows 7 and learned how so much of our software and equipment is now out of date. Thanks Microsoft, for the extra frustration and need to purchase new equipment and software to replace that which was, otherwise, perfectly good. Thankfully we managed to salvage nearly all the data from the old computer.

Mother Nature has had further tricks up her sleeve. The early warm weather had spring events at least three weeks ahead of schedule. The cherry trees began blooming in late April. Spring wildflowers were also thrown out of sync. The Marsh Marigolds in our cedar-ash wetland have already been in full bloom. Our daffodils and tulips are nearly finished. In a cruel sort of twist we once again returned to cold weather. There is now a good chance that the cherry crop may have been damaged by two straight nights of hard frost this week. The asparagus crop was just high enough for the first picking. What ever was not picked is now frost damaged.

At least the pastures are a bit more tolerant of the temperature swings. The grass is now deep enough that we can start getting the flock out on pasture. That cannot happen too soon as far as the sheep and shepherds are concerned. There has been an awful lot of wishful gazing out the barn doors. Struedel is just one of many ewes who have their sights set on the new grass! 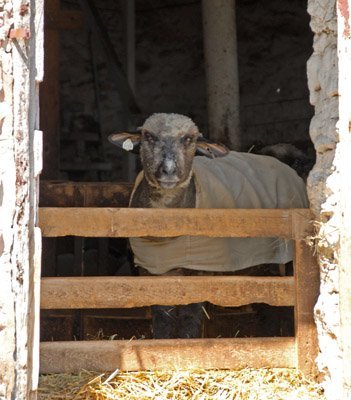 The last couple of days have been spent getting the pastures ready. The above ground water system needed to be checked for winter freeze damage. It is now pressurized and ready to go. The perimeter fences had to be checked for winter damage. One section suffered from the heavy weight of large snow drifts during our December blizzard. One major post was broken off by the weight. It has been dug up and replaced with a beefier post. Checking all the perimeters of the fence can be a pleasant time if the weather cooperates. Much of the fence runs next to woodlands and it is a chance to look out for the first spring flowers. And if you know where to look there is a patch of wild asparagus which is also near a good spot for finding spring morels. 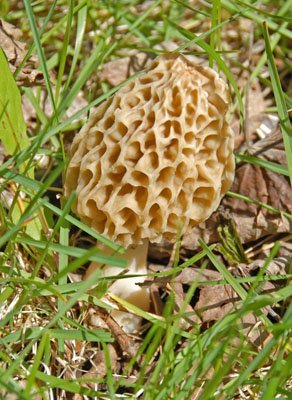 With the threat of a hard frost we did not want to waste either asparagus or mushrooms. After a good days work here was at least a small reward for the next days breakfast fritata. 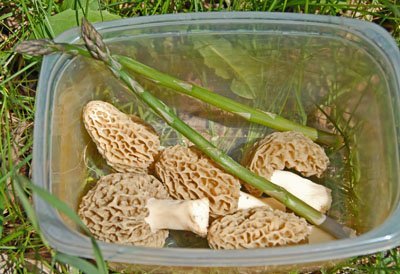