This morning it is snowing for the first time this fall. It is too warm for the snow to stick and even if it was colder, there is not enough snow to accumulate. It does, however, remind me that I have been derelict in keeping the Ewe Turn up to date. My neglect is probably due to the extended warmth that we have experienced through late September and well into October. By mid-October we had yet to experience anything approaching a killing frost. Our vegetable garden was still going strong. 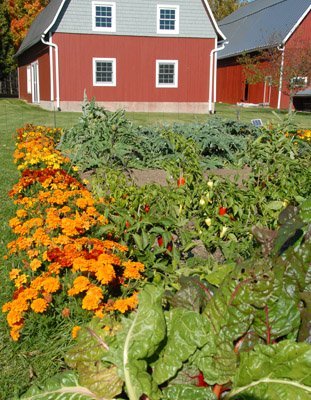 The marigolds (which we grow as a natural dye source, but also just for beauty) just did not want to stop flowering. After a slow start, the sweet peppers also took off. We had already frozen more than we need to get through until next summer. After this photo was taken in mid October, I picked more than two 5 gallon buckets of additional ripe peppers. As I write in mid-November, one of the refrigerators is still full of peppers. We just finished eating the last of the honeydew melons. Later in that week we experienced a mild frost, which did in most of the more sensitive vegetables. The artichokes however continued to hold on nicely. 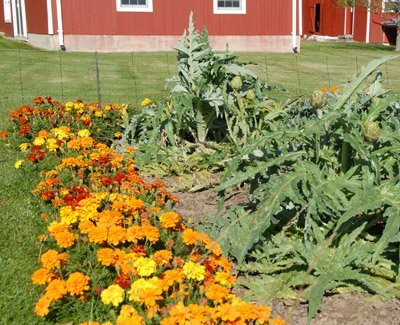 It was not until early November that there was a cold enough frost to finish them off. Before that frost we picked the remaining artichokes and we are still enjoying the smaller ones in frittatas and omelets. Now the garden has been put to rest for the year. It produced an amazing harvest, considering what a slow start it had in the spring and early summer. We consider ourselves blessed.

Our pastures also continued to grow well into October, albeit more slowly. One of the joys of setting up a new pasture section for grazing each day in the late fall is being able to enjoy sunrises as I work. Actually the days grow short enough that I have to wait a bit later before setting out due to the darkness. On this particular morning one could almost believe that we had tall alpine mountains to the east. 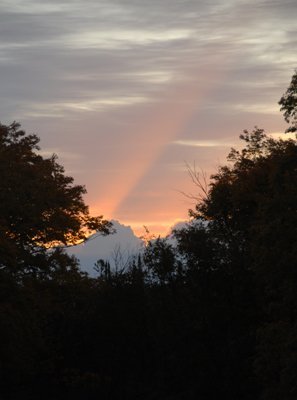 The sheep were able to enjoy fresh grazing through the third week in October. 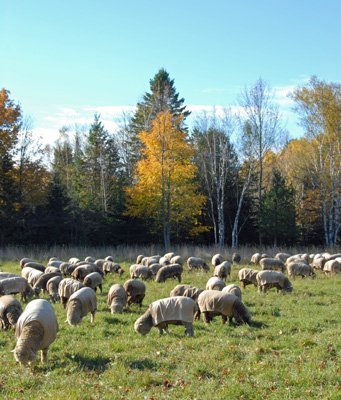 Here they are in pasture #3. They still had a few days grazing left when this picture was taken. Most of the deciduous trees were well into their fall colors and most, except the maples had lost their leaves. The grass still tasted quite good, as the look on Conchita’s face clearly indicates. 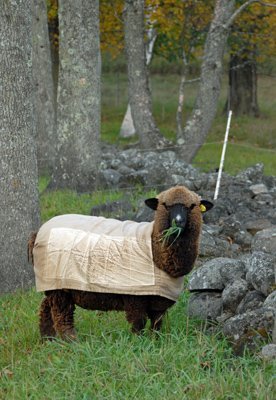 Going out to visit the flock under these conditions is always a joy. The trees can be spectacular and the sheep are especially friendly. It is hard to get back to work after schmoozing with the likes of Dorte and Co. 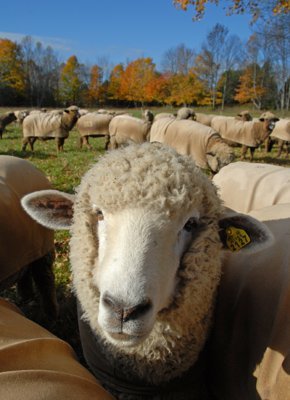 But at least there is a good view on the walk back home to the barn and house. This is our first fall in a very long time, in which the barn has a fresh coat of bright red paint to contrast with the maple grove. 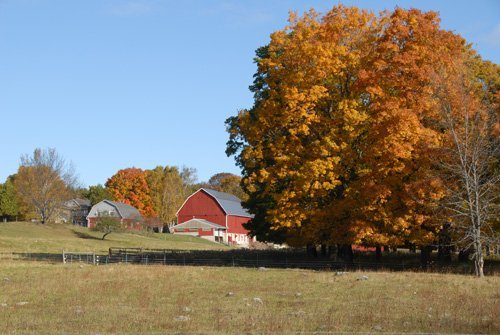 Sadly, we finally have had to stop grazing for the year, as the pastures do not need to be overgrazed. This mid-October view of the barn is now quite different in mid-November, since all the leaves have fallen. The sheep must now be content with their winter ration of baled hay and a supplement of corn and oats. Normally we still would have breeding groups of ewes and rams out on selected pastures at this time of year. That is not to be this year. That story will have to wait for the next installment of the Ewe Turn.