The old shepherd guy seems to be caught up in all sorts of situations and, as a result, again has neglected the Ewe Turn. As uncomfortable as it is for me to write, I figure that I had best take over (again!). I will give the old guy credit, as he has had all sorts of issues to deal with. He can’t seem to finish baling hay (the baler has broken down twice and the weather has not cooperated). He had to clean up after a lot of damage was done around the farm due to nasty weather. And for a time it has been really hot and humid. Sometimes I don’t think he quite knows where he is going.

We too have had our own share of troubled times within the flock. Over the last couple of months we have lost three of our senior members. First Odessa passed on. She, along with her twin sister Odetta, was the oldest member of the flock. The arthritis in her right shoulder just got to be too much for her. More recently, Raine and QT left us. They too were having mobility problems related to their age. We miss all of them dearly.

A couple of weeks ago we had a quite violent storm pass through the farm. Luckily for us the old shepherd guy had the good sense to get us into the barn before the storm broke. For a brief time we experienced torrential rain and violent straight line winds. Five big maple trees were knocked over in the the maple grove next to our first pasture. In addition, a number of major branches came off some of the other maples. It took the old guy much of the next day to cut up and remove the big branches off of the perimeter fence lines. Until he could finish that job we could not go out onto pasture as the fences were not safe. In some instances it was like we had lost very old friends. 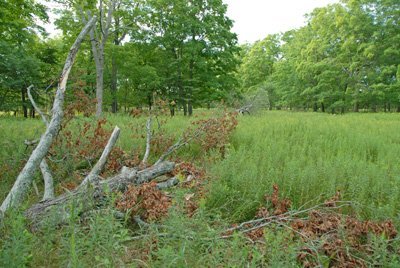 Some of the trees provided us with lovely cool shade in the heat of summer. I also heard the shepherd lamenting the loss of the old serviceberry tree. 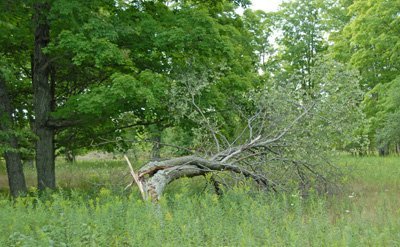 He said it was the biggest and oldest serviceberry on the farm. It was here long before the shepherd guy and nice lady arrived. It was always the first flowering tree to bloom in the spring. We would always start grazing for the first time in the spring just about when it bloomed. It is another old friend that will be missed.

We know that it is getting close to fall. Today we began grazing on the large hay field and that is a sure sign of fall. Here we are leaving home for the hay field at dawn. 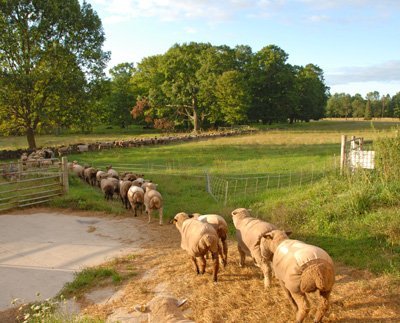 The old grump finished haying that part of the field earlier in the summer, and it is now beautifully lush and green. Good eats! I just came to realize that we had not been out there for at least three years. The last and only time I was there was when I was a lamb. None of the “c”  and “d” lambs have ever been there. The twins, Dorte and Dagmar were asking me about where we were going today. It is pretty difficult to explain that we are headed toward the End of the Earth. I am guessing that we will be there in another 6 or 7 days.

By the time we get that far away from home I am guessing that most of our Barn Swallow friends will have departed for the year. We had a very prolific crop of baby swallows this year. The barn has been an especially noisy place. However, over the last week it has gotten quieter as some of the families have left. Just about everyone of the babies are off their nests but many are still hanging around the barn. To my knowledge in our level of the barn there is just one family left that is still too young to fly. 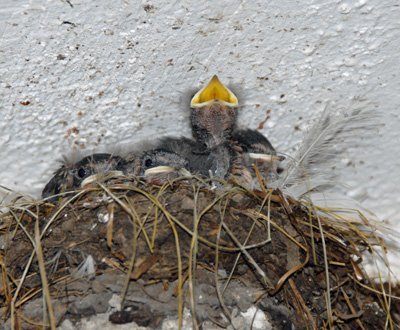 For all I know this may be a third crop of young for this pair of swallows. When they leave we will miss them. At least we do not have to say “farewell”; we hope that it will again be a case of “au revoir”.

Here we are, out on the big hay field, far from home and loving the breakfast!

I am written out! Respectfully submitted,