Final Days on the Faroes

I am having a difficult time finishing off my Faroe narrative. There is so much about which I could write and so many interesting photos to share. I feel I am not doing the Islands justice. I hope to round out the narrative with this edition. I have left out so very much, especially related to people that I met and to my time in the villages, towns and the capital city of Torshavn. While I found that part of my trip enjoyable, I also realized that as soon as I left “urban” areas behind that I was again more “at home”. It is good to be out in the country, both in the Faroes and here at home in Wisconsin.

After spending more than two lovely days in the area around Gjogv, I had planned two days based in the second largest town of Klaksvik, on the largest of the northeast islands, Bordoy. From Klaksvik I would return to Torshavn for two nights before leaving for Denmark and a quick stop in Copenhagen, followed by the long flights back to Wisconsin.

My trip out of Gjogv included plans to hike to the top of Slættyaratindur, the highest mountain in the Faroes. It quickly became evident when I reached the top of the pass above Gjogv that the hike was not to be, as the mountain above me had captured a large, dense cloud which seemed likely to remain the entire day. (It was probably just as well, as I could feel the effects of my long hike the previous day.) Instead, I drove along the northeast coast of Eysturoy, taking my time to detour off the main road to the more isolated villages along the way. 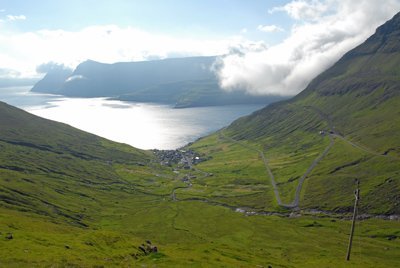 This is the view that greets one upon reaching the high point driving out of Gjogv. At the base of the long, winding descent is the village of Funningur. In the distance, to the left, is the next most easterly island of Kalsoy. The next day I planned a ferry trip to Kalsoy, with a drive to the northern end and a long hike out to a lighthouse at the extreme tip. 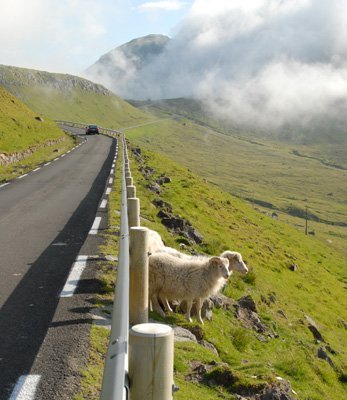 As is nearly always the case, there are sheep along the roads, usually a ewe with her lamb, as is the case in this photo. Inevitably if the lamb gets nervous because of an approaching car, it tries to get a drink from mom, who very calmly moves off to the side with her now nearly full grown lamb. At this point I have just begun the descent into Funningur. The pass to Gjogv is visible in the distance. The road here is like many: a single lane with occasional turnouts to permit oncoming traffic to pass. (The turnouts are also the only place to stop to take such a photo.) Similar turnouts are found every few hundred meters in the single lane tunnels one must use , some of which are a number of kilometers long! 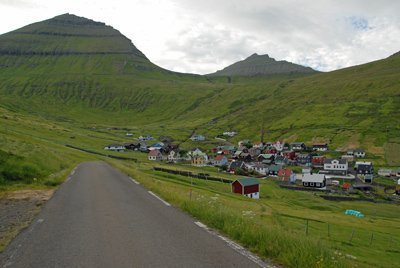 Funningur lies at the bottom of the grade. I have now descended about 1000 feet from the pass to reach the coast and the village. Wouldn’t you know it…Slættyaratindur has now released its cloud and is now completely clear to the top, at 2893 feet. Funningur is another idyllic village with a small population. The grassy infields again climb steeply up the slopes above the village. 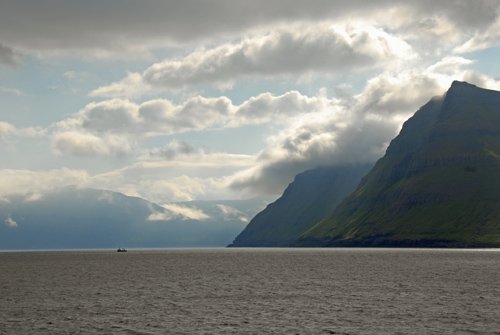 Across the Funningurfjørdur is Kalsoy. The two peninsulas to the right are still part of Eysturoy. The village of Elduvik is tucked out of sight, just around the corner of the first peninsula. The fishing boat (quite a large one) lends a sense of scale to the dramatic mountains.

As I settled in for the night in Klaksvik, a fog began to settle in also. By next morning it was impossible to see the slopes, let alone the mountain tops, that surround Klaksvik. My plans to Hike to the tip of Kalsoy were in serious jeopardy. Nevertheless I took an early ferry to the island and drove the entire length (through 4 single lane tunnels) hoping to emerge into sunshine at the end of the most northerly tunnel, into Trøllanes. If anything, the fog was thicker. 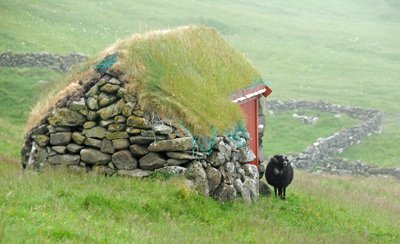 Everyonce in a while the fog would momentarily lift, as it did here, to reveal a ram next to a sod-roofed hay shed. The hike involved, among other things, climbing a steep slope and eventually traveling on a ridge with steep slopes on either sides. It was not recommended for such weather. I waited for quite a time and it was obvious that the fog would not lift. Sadly, I abandoned the hike that I had very much looked forward to. 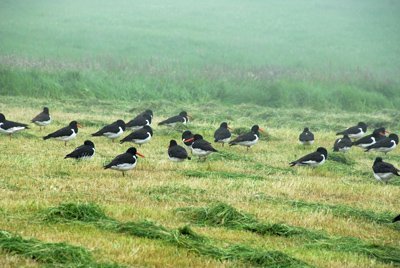 Even the national birds, the Oystercatchers, were grounded in Trøllanes, here in the midst of hay trying to dry for storage.

I resigned myself to other things on Kalsoy. Close to the ferry dock was an Arctic Tern rookery. 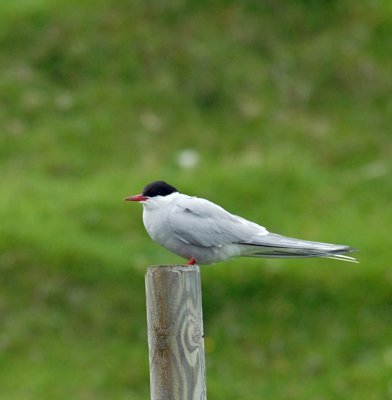 It afforded a good chance for photos, as long as I used the car as a blind. If I stepped out of the car I became the prime target for agitated, strafing terns. On my way back to the ferry dock the fog would momentarily break. 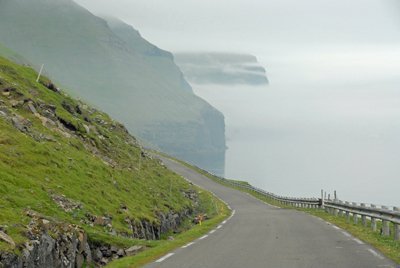 In this instance it broke horizontally. This is the road to the north, perched along the cliff side, plunging downhill, with one of the island’s peninsulas partly visible farther north. Neither the top nor bottom of that peninsula are currently visible, nor is the coast of Kunoy, the next island to the east, just 1¼ miles away.

The home of the Faroe’s largest and oldest breweries, Föroya Bjør, is located in Klaksvik, quite near where I spent my last night. Appropriately their logo includes a ram. 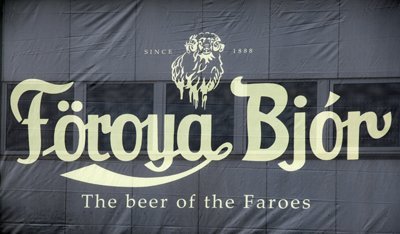 On my final morning in Klaksvik this was about all I could make out, as it had become even foggier! My drive from Klaksvik to Torshavn included the country’s longest tunnel (undersea) of over 6 miles. Unfortunately I saw nearly as much in the tunnel as I did once out. The fog only began to dissipate as I approached Torshavn.

I spent a day exploring Torshavn. I had two delightful meals in an Italian restaurant (a pleasant change from the previous couple of day’s fare). I also visited shops for the major knit wear companies from the Faroes. Only one of the companies, Sirri, is using Faroese wool exclusively. I purchased a number of skeins of naturally colored yarn. I was surprised that I saw none of the yarn had been spun with the longer, courser outer wool separated from the finer, shorter and softer inner wool. All the other major Faroese companies (Guðrun & Guðrun, Snældan and Navia) are blending the Faroese wool with wool from the Falkland Islands! I was further surprised that even that yarn was not as soft as I would expect.

After spending a day in the urban environs of Torshavn, I decided to devote my final full day to the southern and southwestern end of the island of Streymoy. At least the weather had changed to sunshine and clear skies. It was good to be out in the country again. I drove south to the location of the ruins of the ancient stone cathedral in Kirkjubour and then I worked my way up the west coast. 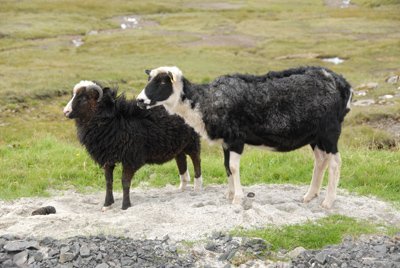 As always, I encountered sheep, in this case a ewe and lamb on the very highest ridge dividing the southern part of the island. I also had ovine company on the coastal road between Velbastaður and Sydradalur. 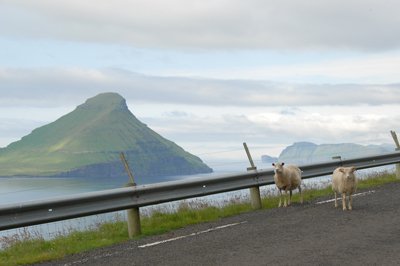 This ewe and her ram lamb have the island of Koltur in the background. One of the steepest descents and ascents that I encountered was the road down to Nordradalur. 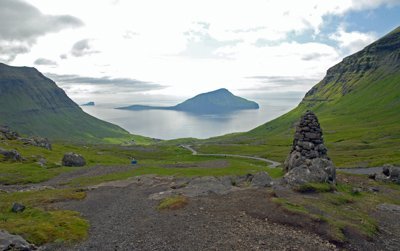 The top of the road is located at an elevation of around 900 feet and it descends to the coast in less than 1.2 miles (as the Puffin flies). Coming back up, I was seriously concerned that my gutless KIA rental car was not going to make it if I had to stop at a hairpin turn, to let an oncoming car pass. Luckily the little “guy” and I made it!

My departure day again turned to fog. The drive back to Vagar and the airport afforded little in the way of views. At least I was lucky in that I had traveled that road a couple of times before and seen the surroundings. My flight from the Faroes to Copenhagen was on time. I managed a lovely meal in Copenhagen, followed by a pleasant evening stroll along the waterfront near Amalienborg. It was also nice to be back in fully conversational Danish for a few hours. The next day my flights to Chicago and Green Bay were long, but on-time and uneventful. My bags (including my Faroe purchased gym bag) made it all the way home with me!

At this point I will close the narrative with a view that to me is so typical of the beauty of the Faroe Islands: two sheep grazing lush green grass on a steep slope, this time on the western coast of Streymoy, with the island of Vagar to the left. Thanks for staying with me this long. 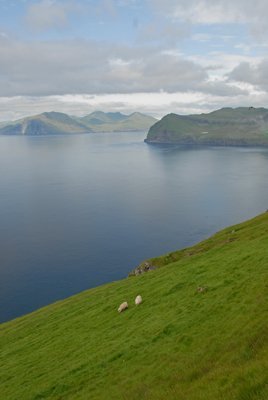