Finding Things to Keep Us Out of Mischief

It has been a strange sort of winter for us so far. On a number of occasions it has been extremely cold, only to bounce into comfortable, moderate temperatures for short periods. Our snow fall totals have not been great. In fact we worry a bit about the overall lack of moisture so far. My snow blower needs some attention, but it has been too cold to do some of the work (water frozen inside a control cable). But so far a vice-grips works just fine to keep the chute pointed at the proper angle. Since I have only had to use it about 4 times the blower is just asking to be worked on after the last of the snow. (If that happens it will be interesting to see if I remember to work on it when it is no longer needed.)

The sheep are in full fleece. Unfortunately, shearing has been put back a couple of extra weeks from its normal date. As a result we have spent a goodly number of hours in the barn of late, changing jackets and trimming hooves. The jackets need changing since just about every member of the flock has produced enough wool to make the jackets quite tight. In some cases, if we did not change the coats, the wool growth during the extra couple of weeks, would have made it a difficult task to remove the coats at shearing. So when the weather has been comfortable we have spent a couple of hours a day in the barn, removing tight coats and replacing them with roomier sizes that should see us well until shearing.

Catching each sheep has also allowed us to trim the worst of their hooves. Without much outside winter exercise the hooves tend to not wear down as they should. Unfortunately, trimming hooves when they are cold and dry is not an easy task. In fact, the hoof trimming was the main factor that limited how many sheep we could work with in an afternoon. Once we had finished the task my right hand grip was considerably stronger. (It also took a few days for it to feel better!)

Since we have not been able to do much outside activity, due to lack of snow and colder temperatures, we have at least found more time for fiber related activity indoors. So far, Gretchen has managed to weave the fabric for quite a number of pillows. She also has been knitting a number of hats. In addition, she also has completed one teddy bear and has another in the works. I have managed to produce a number of blankets, all with the Latvian snow flake motif. There should be at least one more coming off my loom before I must change gears and think of spring time labors. My smaller loom has also been in production, being devoted to deflected double weave scarves. By the time winter is over I will be ready for a different pattern!

In terms of production, Gretchen’s efforts this winter have been the most outstanding. After a number of delays and false starts over the last couple of winters, she managed to revise her Bed and Breakfast cookbook. 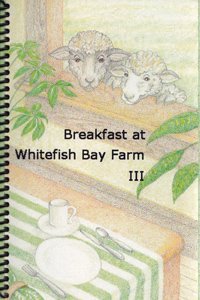 Breakfast at Whitefish Bay Farm III is now finished and printed. Gretchen retained the recipes from the first two editions and added a number of new ones (including some that will be served to guests for the first time this coming year). The cookbook will be for sale at the farm. It can also be ordered from our website’s Mercantile page.

This effort deserves an extra three cheers plus a few extra hugs!