Finishing Off a Hay Stash

This winter has been a difficult one, especially since the first of the year. Both the sheep and shepherds have had to deal with alternating periods of over a week of continuous, single digit, cold temperatures, follow by brief warm ups, at times accompanied by significant snows. On occasion the temperatures got warm enough to partially melt the snows, only to be followed by a return into the deep freeze. These cycles seem to have been especially difficult for some of the older ewes. We have at least managed to keep the flock in the barn and therefore relatively comfortable and out of the wind.

Our very first winter of exclusively feeding large round bales of hay to the sheep has been a learning adventure for us, but we seem to be doing pretty well. It is always an “interesting” event to bring large bales into the barn if the temperatures are in single digits and the winter winds blowing strongly. The alternative is to try to move the bales when it is snowing. In either scenario I am especially glad for the smaller of my two Massey Ferguson tractors. The bale spears are working well and, so far, I have had no difficulty getting the tractor started in the coldest of weather. Plus, four wheel drive has been absolutely necessary!

It warmed up recently, just in time for me to bring more 4 more bales into the barn. Storage space is limited in the annex to the barn and as a result moving new bales inside is totally dependent upon first finishing off all the bales that previously occupied the space. This is what the space looked on Thursday morning after feeding the last of the previous bales to the flock. 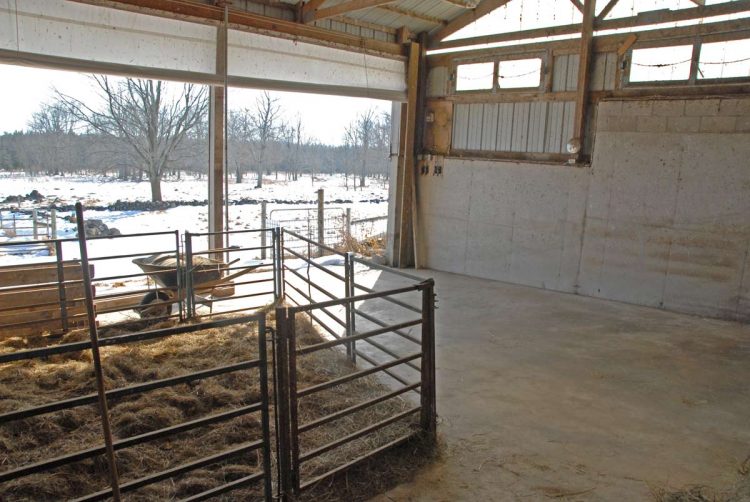 Bringing in those 4 bales marked a turning point in our winter season. Those bales were the last of our supply that had to be stored outside, under tarps. 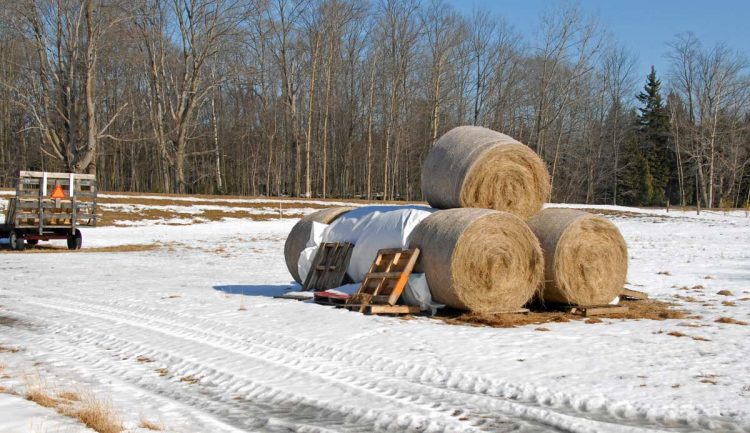 After this hay came into the barn, the remainder of our supply of round bales is stored under roof in our machine shed. At present it appears that we will comfortably have enough hay to get us well into spring and the grazing season. The 5 bales that were not covered by tarps were of poor quality and served as anchors with which to hold the tarps down. The process of moving these “anchor” bales, then the pallets which also hold down the tarps, followed by removing the tarps, actually is more time consuming than moving the bales themselves. 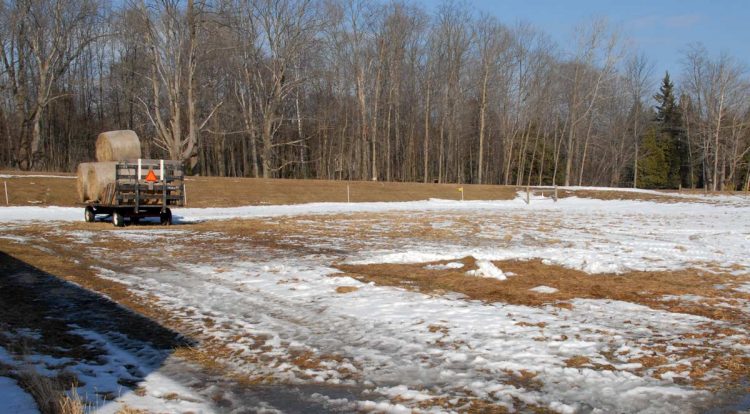 The job took over a couple of hours, but it was done, not too soon. As can be seen when comparing the two images, the snow cover turned to slush and began to melt. We managed to flatten out the two tarps, get them rolled up and undercover before things got too sloppy. The extra “crummy” bales and all of the pallets are now temporarily on a hay wagon. (And by the way…the slush has since turned to solid, rock hard ice!)

The last four bales are now in the barn. 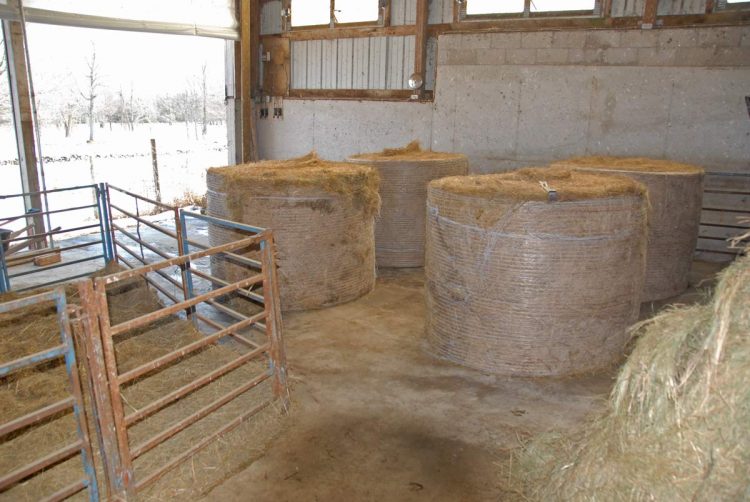 With these bales we should have about 16 day’s worth of feed for the flock. It will be interesting to see what type of weather I will have to deal with after those 16 days, when next I need to bring more hay into the barn! In the meantime the two of us will be busy inside working on different fiber projects. Further accounts of those efforts will follow shortly.