Before I turn to this narrative, I would like to apologize to those of you who attempted to add comments to the last couple of posts and were instead greeted by a message that your effort was a “Bad Request”. I would also like to thank those of you who alerted us to the problem, since is was something that was not showing up on our end of the internet pipeline. It seems that a spammer was somehow able to disable our “Comments” section. Hopefully the problem has been resolved. If it happens again, please let us know.

In a sense, the above mentioned blog problems seem to be a symptom of our ongoing series of difficulties this spring and summer. Just as soon as we get one problem fixed, something else goes haywire. Last winter we discovered that we had a problem with some of the metal posts which support the center beam of the barn. It was a problem that could not be permanently repaired until we could remove the tremendous weight load from the hay above the beam. In the interim we braced the beam with additional temporary building jacks. Finally in June the sheep had eaten enough of their hay supply that we could seriously contend with the crumbling posts. Not only was the weight load reduced, but the sheep were out of the barn during the day, leaving the area free for serious labor.

The task was slow and tedious. First we had to bring in some more serious jacks and supports. The beam had to be lifted high enough that the crumbling posts were free enough to be removed. Once that was accomplished we had to pour three foot high, re-enforce concrete piers where the old posts had been.

I was amazed that we did not have a major collapse earlier. Look at the rusted base of the old post. 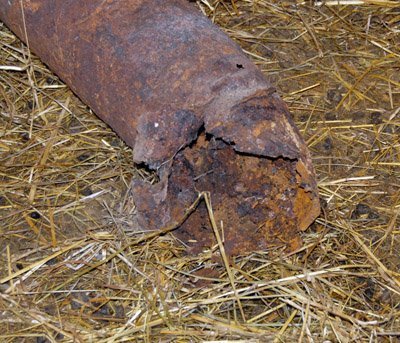 The concrete had to dry and cure long enough before it achieved its maximum load bearing strength. In the meantime I could not help but be continually nervous about the seemingly very small 4″ x 4″ posts supporting all of the weight of the barn.

Once the piers were cured, we had to fit custom cut 8″ x 8″ white ash posts on top of the piers, make sure that they were plum and then carefully lowered the beam back onto the top of the posts. The ash posts were fastened to the piers and the beam with steel brackets which are held by steel bolts. The process was complicated by the fact that we lacked sufficient number of jackets to get all four of the old posts removed simultaneously. As a result we had to start with two of the posts and then move on to the next two.

We were never totally alone in the barn throughout the project. Our numerous barn swallows were in the midst of bringing off their first broods of chicks. I have the feeling that this is one of the most successful breeding years for our colony in a long while. I was amazed how many of the young stayed in their nests, often while we work right beneath them. This little guy had already taken flight, but hung around to watch the show. 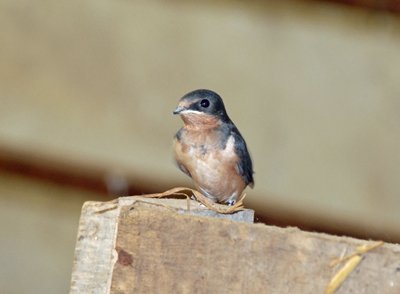 The final day of reckoning came later than I had hoped. But, by late June the temporary jacks were slowly lowered and were replaced by the new posts. Much to our relief everything stayed put and appears rock solid. We were now ready to start cutting and baling hay so that we could reload the barn for next winter. We are behind in that job, but at least the barn is repaired! 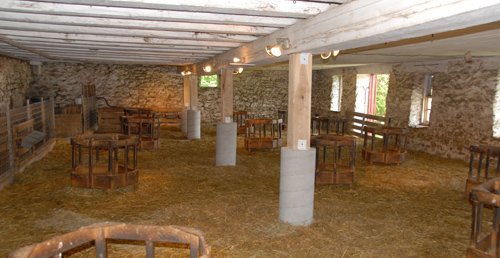 Nearly as soon as we could turn our attention to haying we had another unplanned emergency. Suddenly early one morning we were without power to about half of the electrical circuits to the house. We were lucky enough to get some rapid expert electrician help from Scott. It seemed that one of the two hot wires that run from the meter underground to the house had developed a fault. Within a day we were able to run a smaller, temporary cable above ground all the way around in front of the barn, the gallery and then into the house. At least we were fully back to power.

The tricky problem was locating the fault. Scott’s metering device indicated that it was probably close to the meter. If it was not there, it would mean digging up the old line and putting a new one into the trench to the house. This would have meant digging up the driveway and the walkway to the house…not a pleasant prospect. The area of the probable fault was too confined to allow for a backhoe to do the digging. In addition, such a big piece of equipment was sure to damage other wires near the meter. With the original wires disconnected, the job feel to me to manually dig a trench in search of the problem. Digging down 4 feet below where Scott’s meter indicated the fault was located produced nothing, not even a single cable! Eventually it was decided to dig from the point where the wires went underground and follow the cable until (hopefully) the fault could be located. The set of trenches resembled a maze. After about 10 feet of trenching I was in luck. I found the fault over 4 feet down, before it went under the driveway. Here is the final set of trenches. 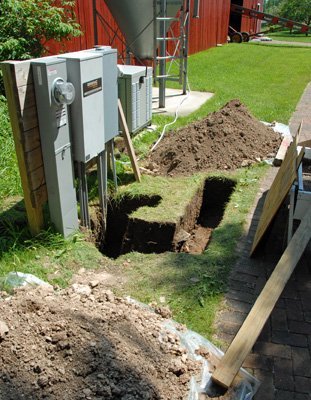 There was no mistaking the fault. Back in late 2011 we installed a back-up electric generator. Part of the process also involved burying the supply cable from the nearest power pole, under Clark Lake Road and along our driveway. Obviously, the boring machinery nicked one of our cables. (These are the folks who advise us to call “Diggers Hot Line”, but who cannot be as careful themselves!) This view is looking straight down 4 feet into the trench, with the fault in view at the center of the picture. 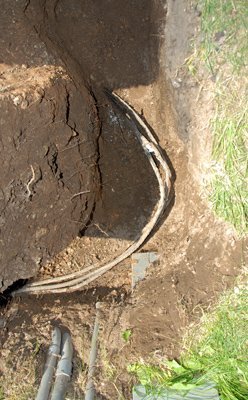 Over time, water, electricity and aluminum wire interacted. The result was a half inch cable slowly turning to white dust. I am amazed that the line managed to successfully carry a current for as long as it did. Here is the “bad boy”, close up! 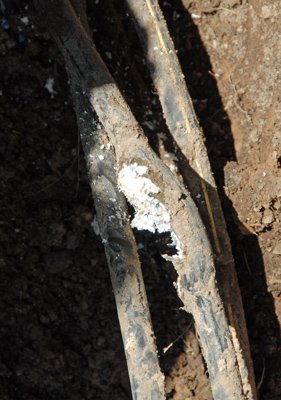 The white stuff is corrosion. That is the break.

Earlier this week, Scott returned to splice the cable and check the other two cables for damage (they were clean!). The temporary cable could be disconnected, the permanent cable reattached and the power turn back on. I have now gotten the trenches filled and the grass repaired as much as possible. Now I am waiting for the next dry weather window so that I can cut and bale hay. Oh, and did I mention, the hay baler has a broken part that we just discovered. It is in at the implement dealers for a repair. I guess this story just does not want to end yet.