Flashes of Orange and Gold

Just over a year ago I wrote about my experience of spotting Cardinal Flowers in bloom in the Cedar/Ash wetlands that border the western edge of our largest hay field. I had noticed the stunning red “flags” in the woods as I finished baling our second cutting of hay. This year there are none to be found. However, I was still to be visually rewarded as I cut the outside rounds of hay for the second time. Due to the super-abundance of rain the hay has grown very well, but I had been limited by the rain as to when I could start cutting the hay. One of the results of the delay is that the alfalfa was in full bloom. Nutritionally it means that the hay is past its peak as food for the sheep. Yet it also means that the blossoms’ nectar is a nutritional treat for butterflies.

This year seems to have been either feast or famine for the native butterflies. Swallowtails of any sort have been few in number. We usually plant extra parsley and dill as food for their caterpillars. The only thing that has touched the parsley all summer was a young cottontail rabbit, who quickly reminded me to set up the little electric fence that surrounds the garden. 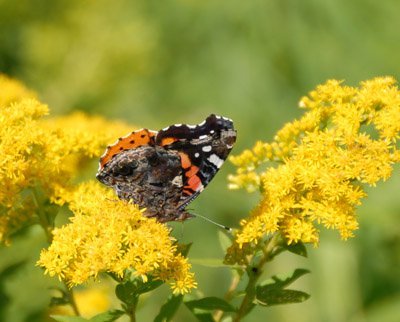 On the other hand, the Red Admirals have done splendidly. In early summer it was difficult to find any stinging nettle that was not nearly defoliated by masses of their caterpillars. The adults have been with us through out the summer. The Variegated Fritillaries have also done well of late. 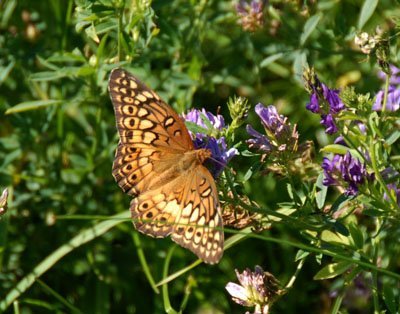 However, the most spectacular perform of the summer has to go to the Monarchs. They were noticeable by their earlier than normal arrival this spring. The Milkweed (the primary host for their larva) also thrived. It was difficult to not find a Milkweed without at least one caterpillar.

I was not, however, expecting the explosion of adult Monarchs 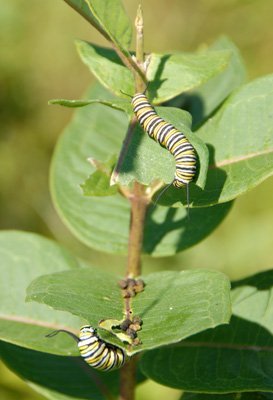 that I witnessed over the last week. As I cut the alfalfa this last week I was accompanied by a multitude of Monarchs feeding on the blossoms. The western edge of the hay field is bordered by a narrow strip of Goldenrod up against the Ash woodlands. As I drove by with the tractor I would disturb clouds of Monarchs who were on the Goldenrod blossoms. After I finished with the cutting I took a walk along the edge of both the uncut hay and the Goldenrod strip just to watch the show.

I began to count the Monarchs. There was at least one butterfly (and often many more) for every pace I took along the Goldenrod. The strip of Goldenrod is only about 6 to 10 feet wide, but it runs almost a quarter mile. Simple mathematics produced at least 400 Monarchs in that narrow golden patch! 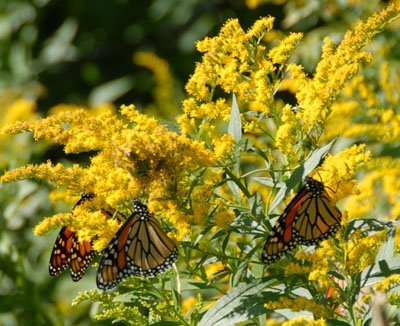 Turning 180 degrees toward the nearly 35 acres of blooming alfalfa, produced equally astounding numbers. In the 27 years that we have owned the farm I have never seen such breathtaking numbers of Monarchs. They have remained with us for the last few days. It is as if they are stocking up on nutrition in preparation for their flight to the mountains of Mexico. The prevailing winds have been out of the south and have been strong enough to limit any successful butterfly flight in that direction. I keep expecting that when the winds die down or switch to the north that they will all be gone. In the meantime it is such a wonderful, visual treat to have thousands of the orange and black butterflies as part of the farm. 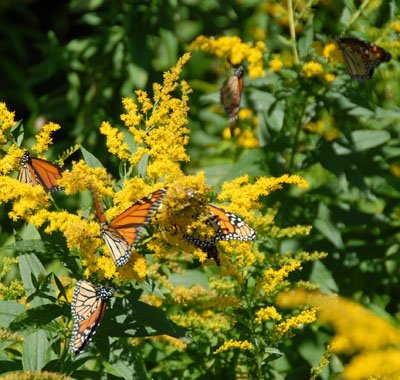 At least six Monarchs in a small space!

When they do leave we wish them a safe journey and look forward to their return next spring. 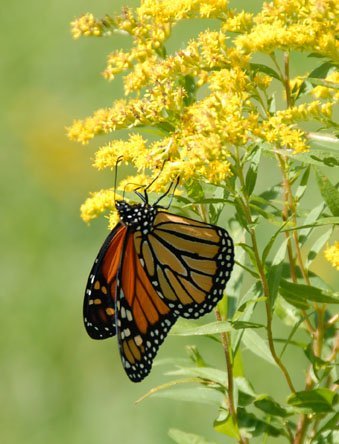