It is amazing how two people, simultaneously subjected to nasty colds, can totally cease to be productive. In a nut shell, that describes what over a month of late winter has been like at Whitefish Bay Farm. Our operation was pretty much shut down from mid February to early March. Aside from making sure that the sheep were fed and properly cared for, about all we two “achieved” was to get a lot of reading done. Hopefully we have pretty much turned the corner on the health issues. It is time to bring the rest of the world up to date on our goings on.

Before our health turned bad and then after we began feeling better, we managed to continue the saga of our adventures with Danish Rugbrød. We seem to be perfecting the baking process and we have ventured out with exciting and yummy lunch and breakfast recipes. I promise more with the next Ewe Turn!

Luckily, this year’s shearing was scheduled later than usual. In addition, weather delayed it a few additional days. We finally got the sheep sheared over a three day period late in the second week of March. Shearing went very well, thanks to David, the shearer, and a very dedicated crew of family and good friends. Compared to last year, the weather also smiled upon us. It was relatively warmer, both during and immediately after shearing. We were comfortable working and the sheep were not so stressed by any extreme cold weather. They are all back into clean jackets and have adjusted their diets to make up for the loss of energy due to their loss of insulation.

Gretchen is now feverishly sorting and doing the final skirting on all the fleeces. As always, our indoor space and our personal energy limits permit us to process no more than 7 fleeces a day. We are past the half way mark on the 125 fleeces, but it will still be a while before we are ready to place them up for sale. With any luck that may occur, as usual, sometime in mid April. We will be in contact with last year’s customer ahead of that date. In addition before the sale, we will be e-mailing those who have contacted us during the last 12 months or who purchased fleeces from us in the previous couple of years.

Some followers of the Ewe Turn may be wondering what has happen to the usual lambing chronicles. If you paid attention last fall you would have noticed that we decided to take a year off from lambing. With our compromised health status we were especially glad about that decision. Nevertheless, we did not quite manage to get to spring without lambing.

Last fall, on the evening of the very last day that the sheep were on pasture, when the ewes were returning to the barn we had a potential disaster. All four rams managed to break out of their quarters in the barn and joined the ewes on their way into the barn. I spent a very frantic 30 minutes chasing and capturing each ram. By the time I managed to get the last of the four back into their quarters, it was readily apparent that the four had made the most of their brief encounter with the ewes. At that time all we could do was mark our calendar for 148 days later and hope that no ewe arrived at that date pregnant. During the intervening 5 months we could not feed the entire flock a diet designed for pregnant ewes or we would have had a group of over weight ewes by spring. We therefore knew that if a ewe was pregnant, she could well have a lamb or lambs that were nutritionally compromised.

We also had no way of knowing until close to the hypothetical due date whether any ewe was pregnant. When the flock was sheared, it became apparent that we almost made it with no pregnant ewes. Blossom was the only one and she did not look the normal huge size she should have. She delivered twin lambs within 12 hours of the expected due date. Based upon the markings and colors of the lambs we are pretty certain that Clancy was the father. 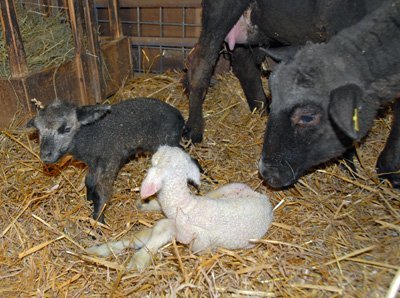 Blossom and her two lambs

Unfortunately both were very small, just over 4 pounds each. In addition it appeared from Blossom’s placenta that there had been a third lamb which died much earlier. The presence of a third lamb, though dead, tends to compromise the space and nutritional intake of the other two. The white ram lamb never gained enough strength to stand on his own. The colored ewe lamb seemed to do better, with the one major problem that she did not and/or could not learn to nurse on here own. We milked Blossom and repeatedly tube fed both lambs. Within 30 hours of birth the ram lamb quietly died. The ewe lamb then proceeded to rapidly go down hill. She too was dead 6 hours later. Blossom was beside herself for two days. She has now finally resigned herself to the loss of both lambs.

It is always difficult for us to loose lambs in this fashion. Yet it is perhaps just as well in this case. Both lambs were so small and so extremely compromised that they probably would never have thrived. It would have been hard on Blossom dealing with two such lambs amongst a flock of over 100 other ewes. Nonetheless, it is very difficult for the two of us and Blossom. We look forward to a well planned and successful lambing a year from now, but we mourn the current loss.