The “Ewe Turn” has been woefully neglected over the last few weeks. Most of the blame can be placed upon the weather, which for most of July and August had been excessively hot and humid. Only during the last week or so has the temperature moderated and the humidity receded. As a result it is possible to actually get a few jobs finished without getting totally fatigued in a couple of hours. The narrative that follows will, hopefully, fill in these gaping blanks of times.

It seems as if the summer was one continuous battle to cut and bale hay. In reality, it has been a long series of skirmishes frequently disrupted by excessive heat and/or largely false forecasts for rain. The usual scenario has been that attempts to cut hay were put off by threats of massive thunderstorms headed our way. If hay was successfully cut, the threats of rain only worsened the urgency to get the hay dried and baled. As the temperatures slowly but steadily increased, the threats of rain were replaced by oppressive combinations of heat and humidity. For a couple of weeks I finally gave up as it was health threatening to be trying to bale, load and unload 400 bales in a day or two. Over all we received less than .75″ of rain in August until we finally got a good soaker of .7″ early this week. The few small rains we did receive tended to wet the cut hay enough to require more drying efforts (and to reduce the hay’s feed value). To further our frustration some of the very hot days were also exceedingly windy. In those conditions, if the hay was raked into windrows, it would dry rapidly, but in doing so would blow all over the field. On two different occasions, I took the extreme solution of raking a single round with our small tractor and within minutes of finishing the single circumnavigation I would switch to the larger tractor already attached to the baler. Then it became a race to gobble up the windrow before it rolled across the field. From above it must have appeared as if the tractor was often out of control, haphazardly zigging left or right in pursuit of a living, and active windrow. It was ultimately a slower way of getting the hay baled, but at least I managed to get most of it corralled.

Finally, the last of the hay has been baled (luckily a day before the first heavy rain). Above is the last wagon of hay for 2011! The last wagons brought our total for the year to over 3000 bales (not counting hay also baled for friends). The 3000 bales have filled the barn and should see us in good stead through next winter. Our only current concern is that we will not get a timely follow up to the last rain. 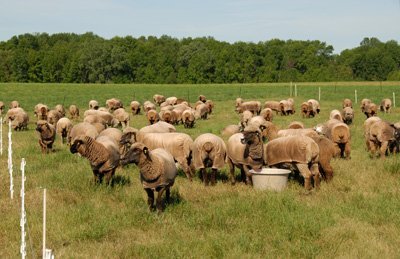 The pastures have not grown back as I would like. The sheep will not have enough to graze through fall unless we receive more rain. Once we have grazed through all the pastures we will possibly be faced with having to dip into out winter baled hay to tide us through fall. As it stands the flock is currently grazing parts of our hay fields which were cut early enough to partially regenerate before it became dry. We usually do not put the sheep onto this part of our hay until mid-September. At least they seem content.

The heat also put a crimp on Gretchen’s summer dying projects. It was certainly not weather suitable for standing with your head over a steaming pot of hot water and yarn! Sales of our naturally dyed yarns have been robust this summer with the result that our inventory has been depleted. The cooler weather of the last week at least allowed Gretchen to get back to dying. Over the last couple of days she has replenished some of our indigo dyed stock. Besides the blues achieved with indigo she also over died some of the yellow yarn. The resulting greens have been especially vibrant. We were especially surprised by the intense green achieved by dying an otherwise dull yellow yarn which was the result of using birch tree leaves. It is the second green from the right. 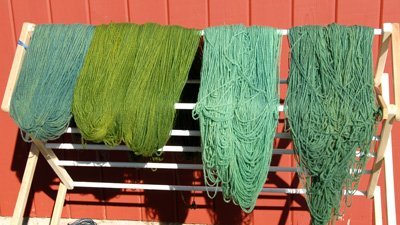 Hopefully life is returning to normal. We can turn our attention to more exciting and less frustrating endeavors.