It has been a long time since the old shepherd guy came home from overseas. You would think that by now he would have let everyone know what has been going on at the farm, especially with us, the sheep. But no…he was too busy writing about the Faroe Islands and his crazy adventures. (At least he did have the good sense to write about our cousins who live on those islands.) Well, since the old grumpy guy does not seem to have his act together, the task of bringing everyone up to date has fallen to me, Brie. It has been a while since I tried writing here, but I will give it a try.

While the old shepherd was gone, the weather here was warm and dry. In fact, our pastures had just about dried up. Almost as soon as the shepherd returned, it started to rain. It seems to not have given us much respite ever since. One would think that he could of planned things better! We saw him out in the big hay field an awful lot. Sometimes he was trying to cut and bale hay. Most of the time he was wandering around and muttering to himself about the weather. He wasn’t having very much luck baling hay, because of the recurring rains. For us, the rain was good, since it really gave our pastures a good kick and got them growing well again. As a result we had a lot of new green grass to eat. 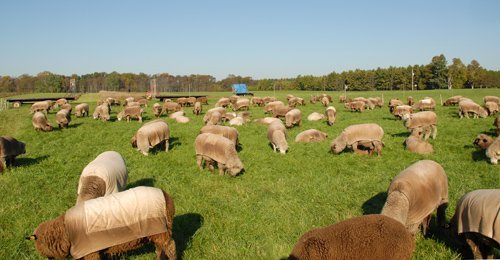 Here is what it looked like with us being back in the Orchard Pasture less than two months after we had grazed it down. As you can perhaps see, the old shepherd was trying to bale hay but all he could do was to cover it up with tarps.

At least being in the Orchard gives us a good opportunity to see what is going on at the big house, the grumpy shepherd, the nice lady and all the folks who come to visit. Besides trying to cut hay between rains storms, the old guy was busy tending the vegetable garden. We could hear him grumbling about how the zucchini was never going to stop growing. Even from a long ways off we could see what he meant. 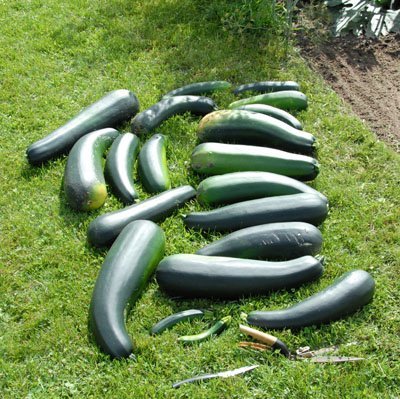 At least he seemed happy how the rest of the garden had finally started to produce.

The shepherds also grew a lot of Cosmos flowers in the garden this year. The nice lady used the blossoms to dye some of the yarn they made from our wool. Nearly as soon as the old guy picked all the flowers they just came roaring back. 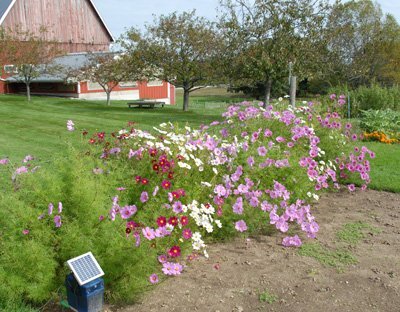 It’s funny how all those pink, red and white flowers only make our wool look bright yellow, but I guess that’s how it works.

Toward the end of September, the nice lady disappeared for a week. (Of course that meant that we were stuck here with the old grump!) It seems that she went to a workshop someplace near the ocean. The workshop was supposed to help her improve her skills dyeing with indigo. From what we could hear, she had a good time, learned lots and had lots of good fresh seafood to eat. I have been trying to get her to tell me more about the trip (she is rumored to even have pictures!). If I succeed I will try to share what I learn with the rest of you, so stay tuned.

From the Orchard Pasture it was easy to see the results of her workshop, because she had the dyed yarn outside to dry in the infrequent sunshine. 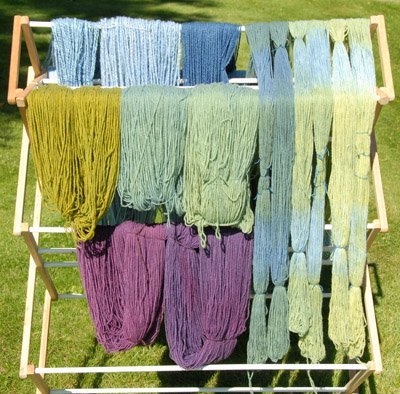 The blue yarn is from some of our white wool. Winifred and her boy Alfred (the big guy) couldn’t believe that it once was white wool. 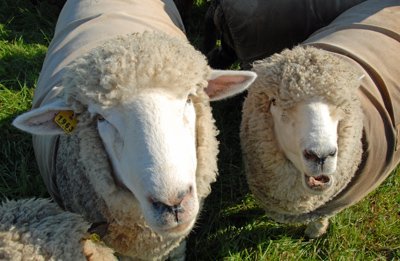 We finally had to leave the Orchard, as we had again grazed it down and we moved on to Pasture #3. 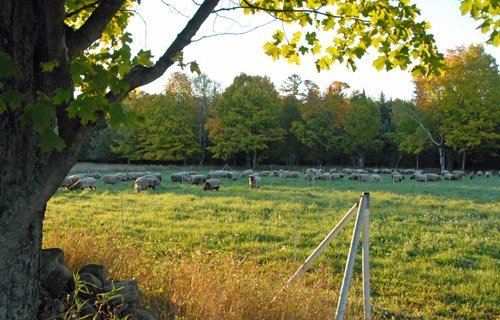 It is now mid-October and it is still raining, but we did get a few nice days so far in #3. In between rains, it has gotten cold for a couple of good frosts, but not cold enough to kill the grass in the pasture. (By the way the old guy was very happy because the frost finally finished off the zucchini!)

We were all kind of surprised to be out in #3 so late in the season. Usually this late, the only reason we would be there is because we would be in breeding groups. Sadly for us, the old shepherd neglected (forgot?) to send at least one ram out with us. We haven’t figured this one out yet. I am not sure how long we will be here. We figure it will be about 5 more days of grazing as that’s about all the grass there is. But right now we are stuck in the barn because …you guessed it…rain! Nonetheless, it is nice being in this pasture when we can at this time of year. We get there before the sunrise and get to enjoy the early sun on all the colored trees that surround the pasture. 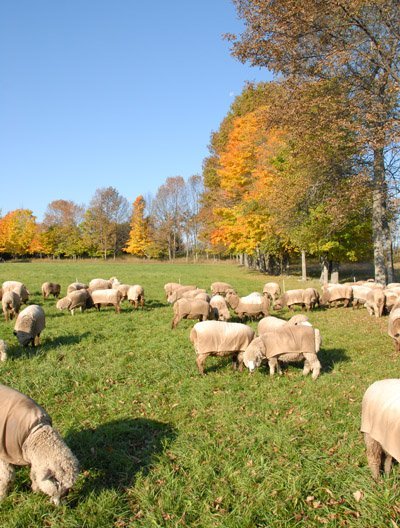 So…I hope you now feel a bit more up to date. I will keep my eye on the forgetful old bearded guy. If he continues to neglect to write I will try to fill in as best I can. 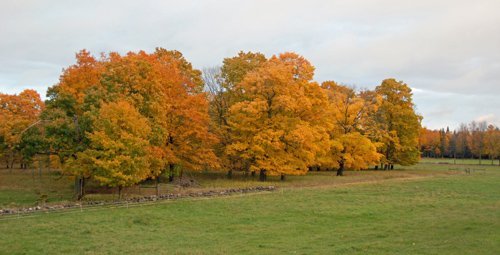