When last anything was posted to the Ewe Turn we still had lots of snow on the ground. A long time has passed since then. In the interim we have experienced more snow, lots of rain and occasional warm sunny days. Spring is at least 10 to 14 days behind schedule here at the farm. Despite all the unusual occurrences, the sheep were successfully sheared in March and their fleeces all prepared for sale. We held our annual fleece sale in mid-April and all of the fleeces were sold in a record short time of 1 hour and 5 minutes! A big “Thank You” to all of our loyal customers for their support and patience!

Beginning in March, due of the persistence of snow on the ground I began taking my walks along side Clark Lake Road (rather than slogging through snow drifts in the pastures). My usual walk has taken me west from the Bed & Breakfast, past the northwest corner of our farm and onward to where Whitefish Creek runs beneath the road. Sometimes, depending upon the weather, the walk is extended farther west or east. It is usually a distance of just over a mile in length, and has proven to be a good opportunity for me to watch the gradual changes as spring struggles to make an appearance. Three quarters of the way west is next to our large hay field. The remaining distance is adjacent to our ash/cedar woodland swamp land (an area of about 20 acres). The woodlands is a great place to look for birds, not only the spring arrivals  but some of the hardier year-round natives, a couple of whom are already well into nesting. There is thus all sorts of good reasons for the walk besides the exercise. Two weeks ago things got warm enough that some of the early spring woodland flowers began to bloom. One of my favorites is the Bloodroot. The clump that is pictured is just on the edge of the woods. 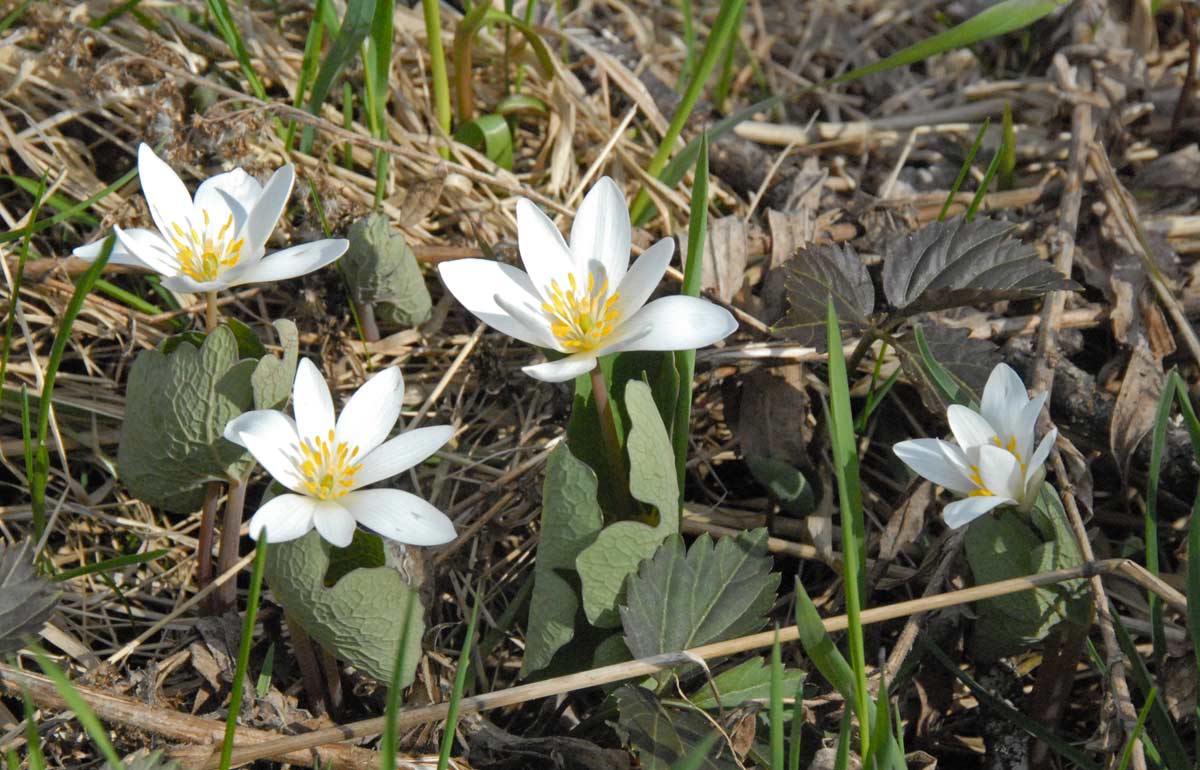 Just as the Bloodroot were in full bloom, the Marsh Marigolds were just starting to open. In my humble opinion we have one of the nicest large stands of these beauties. About the same time as I spotted the Bloodroots I happened to notice a single Sandhill Crane in the wetland surrounded by the Marsh Marigolds. He was quite still and surprising difficult to see. 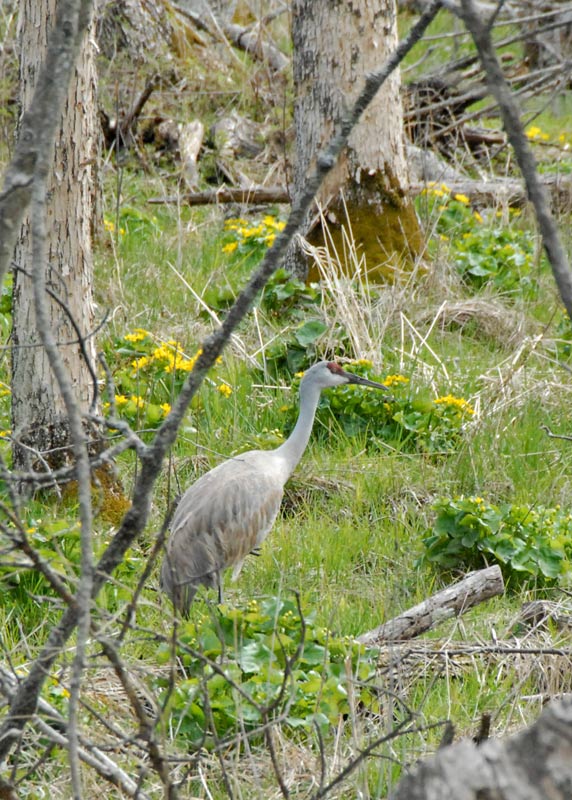 A little farther west, Whitefish Creek passes under the road. At this point it runs west of our land, but gradually enters into to the southwest corner of our wetland. This spring it ran vigorously due to all the snow melt and rains. By this week it had become a much gentler flow. There are a few Marsh Marigolds along the creek side and at this point a large “forest” of ferns always appears. They are just showing the tips of their fronds now. 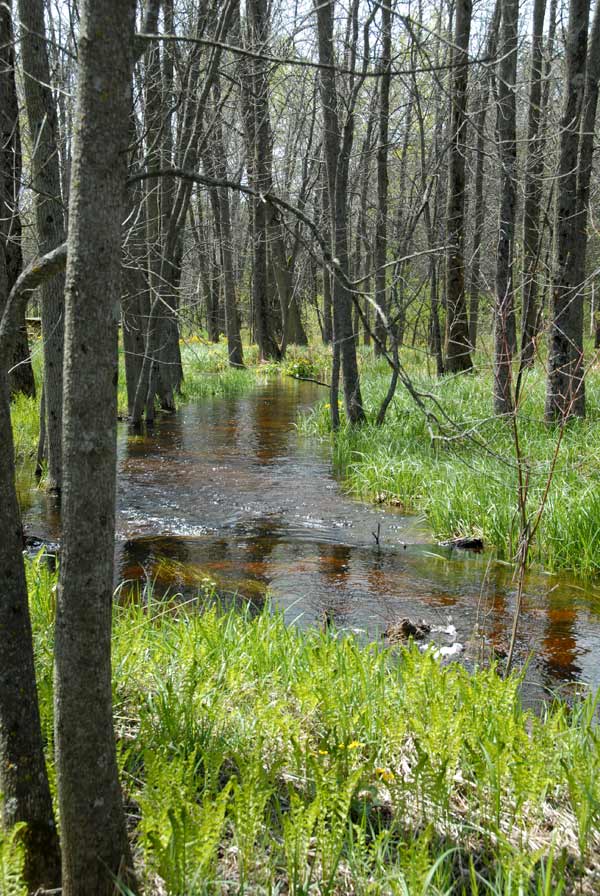 Heading back toward home gives the best views of the Marsh Marigolds. This view was from just a day or two ago. They benefit from the extra bit of sunlight that filters into the wetland at this point, an area where we have had a large number of ash trees removed after their death. 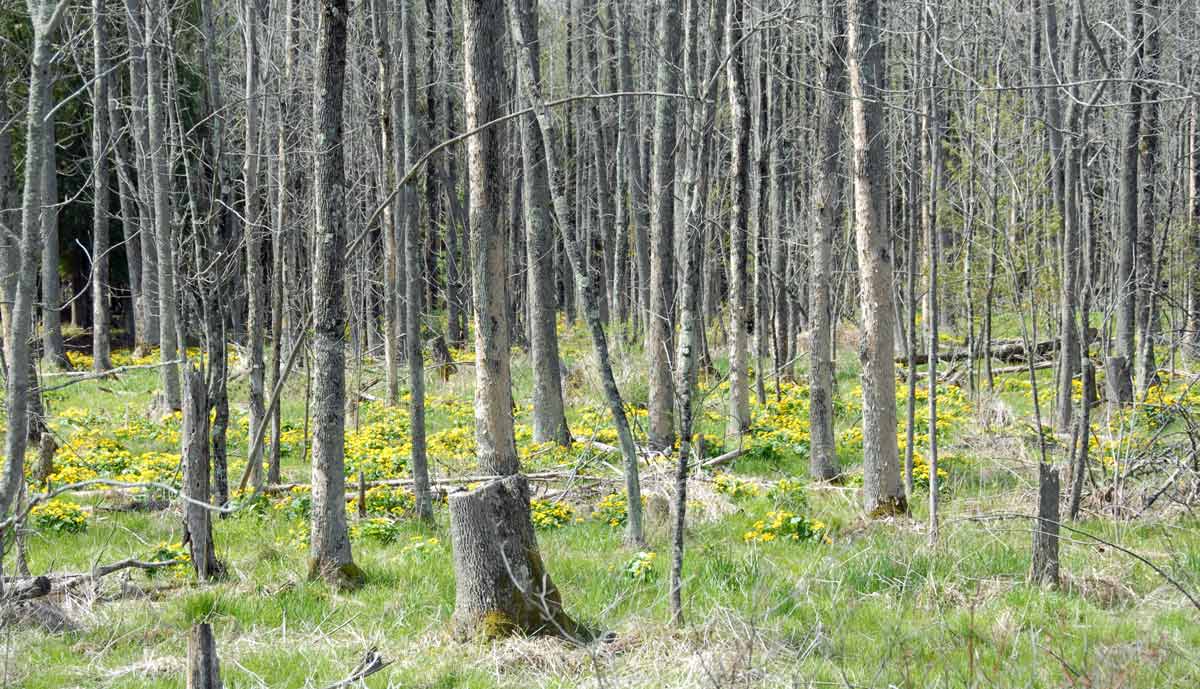 Sadly, this woodland is showing severe signs of the Emerald Ash Bore beetle invasion. Over winter the most severely effected trees have shown that our local woodpecker population have been busy feeding on the bugs just under the bark. It is difficult to see in this image, but many (if not most) of the trunks are showing a tan color where the bark has been removed by the woodpeckers. Below is a close-up view of the base of one large ash tree trunk. It is easier here to see the shredded bark on the ground next to the trunk. 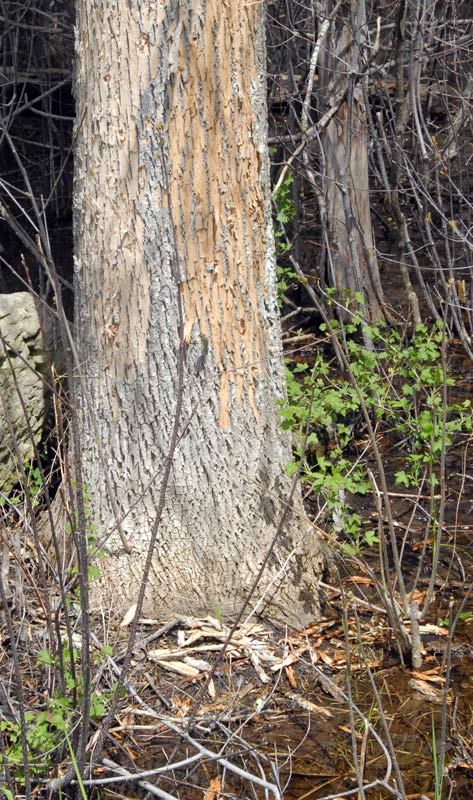 Ashes make up the majority of the trees in our wetland. Sadly, in the very near future, they will almost all be dead. How the wetland evolves after that will be hard to imagine.

After major repairs to fences and waterlines, the pastures are finally ready for the sheep. They began grazing May 21st, which is much later than usual. I promise that our next post will be devoted to the flock.