It seems that the events of the last few weeks have managed to slip past the pages of the Ewe Turn. It is time to make amends in that regard. As is so often the case, the weather (especially winter weather) has had an influence upon nearly everything that goes on at the farm. Through the end of December, it almost seemed unfair to categorize the weather with the title of “Winter”. Temperatures were unseasonably warm; snow and/or rain were generally lacking.

One of our early winter tasks is to get the composted organic matter removed from the manure storage and spread on our hay ground and pastures. I am not inclined to do that until there is a good frost in the ground. Without the ground being solid, the numerous trips across the fields with the tractor and manure spreader results in the ground being chewed up by the lug tires of the tractor and then packed down by the weight of the full spreader. It took until late December before there was enough frost in the ground to even attempt the task. It helped to also finally get a bit of snow cover. My week between Christmas and New Years was spent hauling compost. By December 28th the last of 44 loads was spread. Now there was room to clean out the barn again. By New Years, what snow we had again melted.

January pulled a switch on us. It became suddenly cold. Then a week later it warmed up. This last week it again cooled off. We reached -8° F (-22°C) a couple of nights ago. It has meant making sure that all of our cold weather procedures were working in the barn. So far, all of the pipe warmers and water bucket heaters are working just fine. One just has to remember not to touch any of the metal panels with a wet bare hand. Unfortunately, equipment in the house has not been as trustworthy. We had to deal with a day without the furnace. Thank goodness for the good old Morsø wood stove!

The sheep are coping well with the yo-yoing temperatures. It helps to be fully fleeced with at least 3 inches of wool. Hopefully, temperatures will moderate by late February when it is time for shearing. Shearing will be the first time we have a good idea which of the ewes are pregnant, since lambing should start just a couple of weeks later. Hopefully, only the ewes that we intended to breed will be pregnant. There is, of course, the little matter of four of the rams getting in with the entire ewe flock for a night two days after we had officially closed breeding. There is a “morning after” shot that can be given to sheep. We decided that we would give about 40 of the ewes the shot since that group includes the older ewes, ewes whose health might be threatened by a pregnancy and ewes who no longer have sufficient milk to raise healthy lambs. There are another 40 ewes that we did not intend to breed but who did not get the shots. We are counting on just a small percentage of that group being in heat during the boys’ night out. So, we shall see….

Away from the barn, we found the time to sand down and re-varnish the kitchen floor. The re-varnishing has been a frustrating experience, since the quality of today’s varnish is not as high as it was when we originally remodeled the farm house. After may extra coats it looks like we finally have gotten the floor back to the way it once was! The old maple flooring looks good again.

Aside from manure, sanding and varnishing, we have found some time to devote to fiber. Currently on the big loom is a blanket made from our mill-spun yarn. The colors are natural (white and two shades of gray) and white naturally dyed with indigo and black walnut hulls. This photo shows the warp for the blanket, all ready to tie-on to the loom. 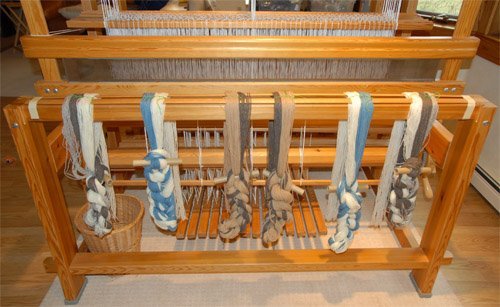 The pattern is a simple Swedish Goose-eye. Here is how it looks after about half woven. 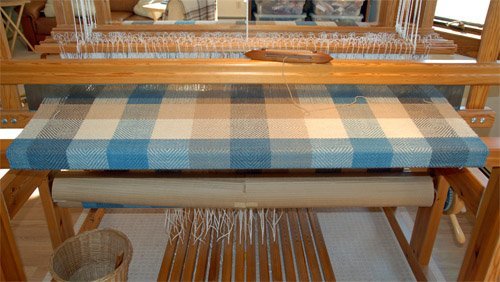 Lastly, here is a bit of the pattern detail. 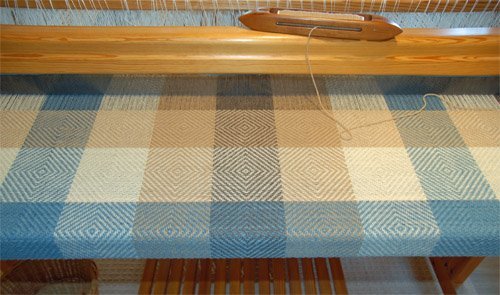 This about wraps things up. With a little time and luck the blanket will soon be finished and we should then have a more timely update for the Ewe Turn.