To paraphrase from the famous line, yesterday was the best of times and the worst of times. We have gradually and finally emerged from the snow and cold. It has been warm enough to get the pastures growing, albeit slowly. The sheep seemingly can sense that it is time for them to be out on pasture and grazing. It has taken a while for me to get the pastures ready in terms of the fencing and watering systems. A couple of days ago I thought that the water lines were all set. I pressurized the entire line which runs, in total, at least a half a mile. Then I checked each connection for leaks and loose fittings from front to back pastures. Along the way I bled the air out of the lines and flushed any accumulated gunk. Pleased with the seeming lack of problems, I returned to the prime connection in the barn, only to find, to my chagrin, that the main line had sprung a leak and was trying to flood the barn. The leak was due to freezing of a section which did not get properly drained last winter. It took another day to replace the guilty section of pipe. The next day I got the electric fence tested, at least without the problems akin to the waterline. Yesterday was thus set for grazing. 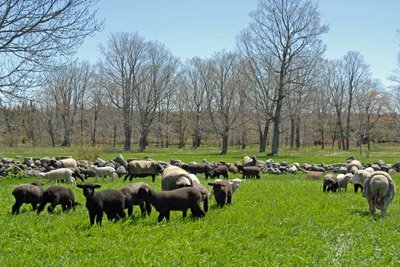 After making sure that the flock all had a good breakfast of solid dry hay, we were set. (One has to be careful switching from a dry hay diet to a lush green wet one. The major danger can be bloating and changing the balance of good bacteria in the rumen.) For the first day, only the ewes with lambs and their lambs got to go out. It is always difficult to get the lambs to venture out the barn door for the first time. The moms are willing and eager. Unfortunately they cannot take their children and calmly lead them by the hand where they have never been before. For the most part that duty falls upon the two of us. The vast majority of the lambs on the first day have to be caught and carried over the threshold. Once outside everything is “just fine” except for an extra bit of baahing needed to reconnect with mom. After a few hours on pasture, which included lessons on the forces behind electric fences, the lambs were seasoned pros. By late afternoon they were grazing green grass just like the adult ewes. We will repeat the routing the next day, with (hopefully) less shepherding and more voluntary lamb exits from the barn. The following day the “retired” ewes will get to rejoin them; the next day the same will apply to the yearling ewes. Then all of the ewes will be back together for the first time since January. It will be a happy time for all…almost.

Wendolyn with her lambs, Ashley & Ainsley

In the midst of the preparations for grazing we were faced with a sick ram lamb, Abdul. He is Serena’s single lamb who had become quiet friendly very early on. He was growing extremely well. A week ago he acted depressed and began to swell up in an unusual fashion. Our vets were called in and were as puzzled by his condition as we were. We tried a couple of treatments and after a few days he seemed to improve. The swelling went down but he then stopped eating. He died quietly overnight, before everyone was to go onto pasture. Serena was lying with him the next morning. The bond between a ewe and her lamb can be very strong. Such was the case with Serena and Abdul. Serena was upset that morning, but she exited the barn with the rest of the ewes and lambs. Once on pasture she continued to look and call for Abdul.

As I usually do, once we have all the lambs out for the first time, I sit down in the grass in the middle of the pasture just to watch the ewes and lambs. Usually the friendlier ewes will stop by for a brief visit, as will the curious lambs befuddled by a crazy shepherd sitting on his butt in the middle of the pasture. Finally, Serena came over to me and stopped calling for Abdul. We spent a long time together, sharing quiet hugs. I have felt it before, but I still am amazed by the compassion and love these creatures can feel for each other. I am even more moved how in times such as these they can share their grief with us. My heart is with you Serena on this sunny, green day which should have been so happy for you.

This coming weekend (May 21st and 22nd) is the Door County Shepherds’ Market. We hope that lots of folks take advantage of the experience, especially if they are interested in things that are fiber related. There will be lots to purchase from a number of Door County fiber producers: everything from raw fibers to yarn to finished products. Gretchen spent the better part of two weeks with a couple of friends dying lots of our yarn with natural dyes, all in preparation for the Market. As time allows I will spend time with another blog detailing the project. But just to tempt you, here are a series of images of some of the yarn just after it came out of the dye bath. 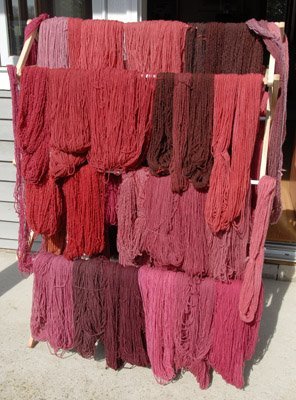 These are reds, using Cochineal on both white and gray yarns. Next up are, among other colors, oranges and blues, using indigo and Cochineal as an overdye. 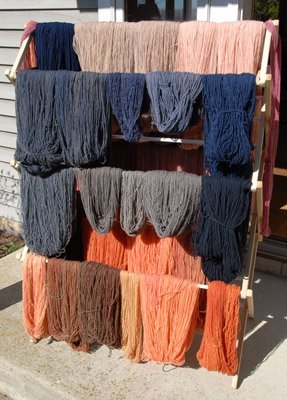 Pussa, had to inspect each separate batch of yarn as it was hung out to dry. Here she is passing approval on a batch of greens, the result of overdying indigo on onion skins, tesu and chamomile 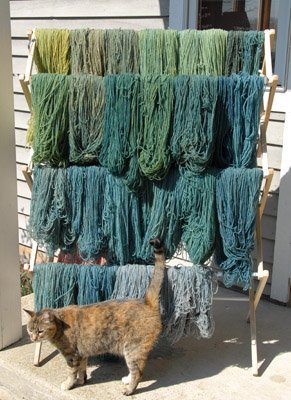 The sheep could care less about dying. Toodles is just pleased to be outside and grazing. We will leave her editorial comment up to reader speculation. 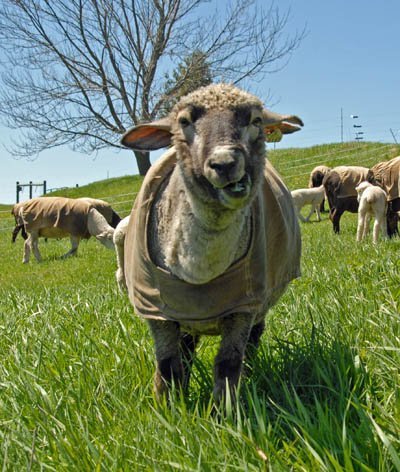