It has been a month since I last wrote anything for the Ewe Turn. So many things have been going on here in that time that I will not be able to comment on many items. Therefore, what follows are merely a few highlights. Over the last thirty days we moved from early fall all the way into winter. As I write, we are experiencing our first significant snow fall of the year. It looks like before it is over we may have from 4 to 6 inches on the ground.

In early October we were blessed with some beautiful fall colors in the trees. There was a steady but gradual change in the shades, hues and their intensities. By the 22nd, most of the ashes were bare, along with many of the birches. The sugar maples and aspen held on to their leaves and their color. I managed to launch my drone at that time. Here is a view to the east, including the house, farm buildings, Clark Lake close by and Lake Michigan in the distance. 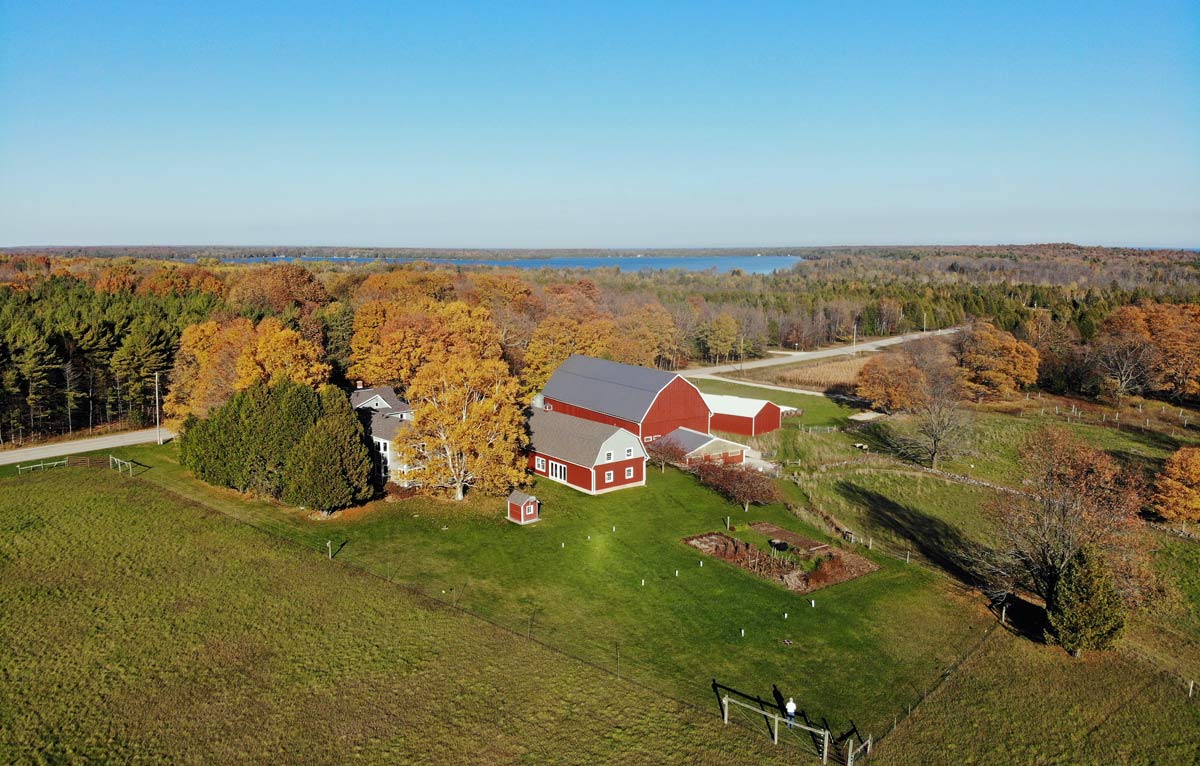 By this time our maple grove had lost its intense red/orange and yellow to a more subtle orange/yellows. Nevertheless it was still lovely. 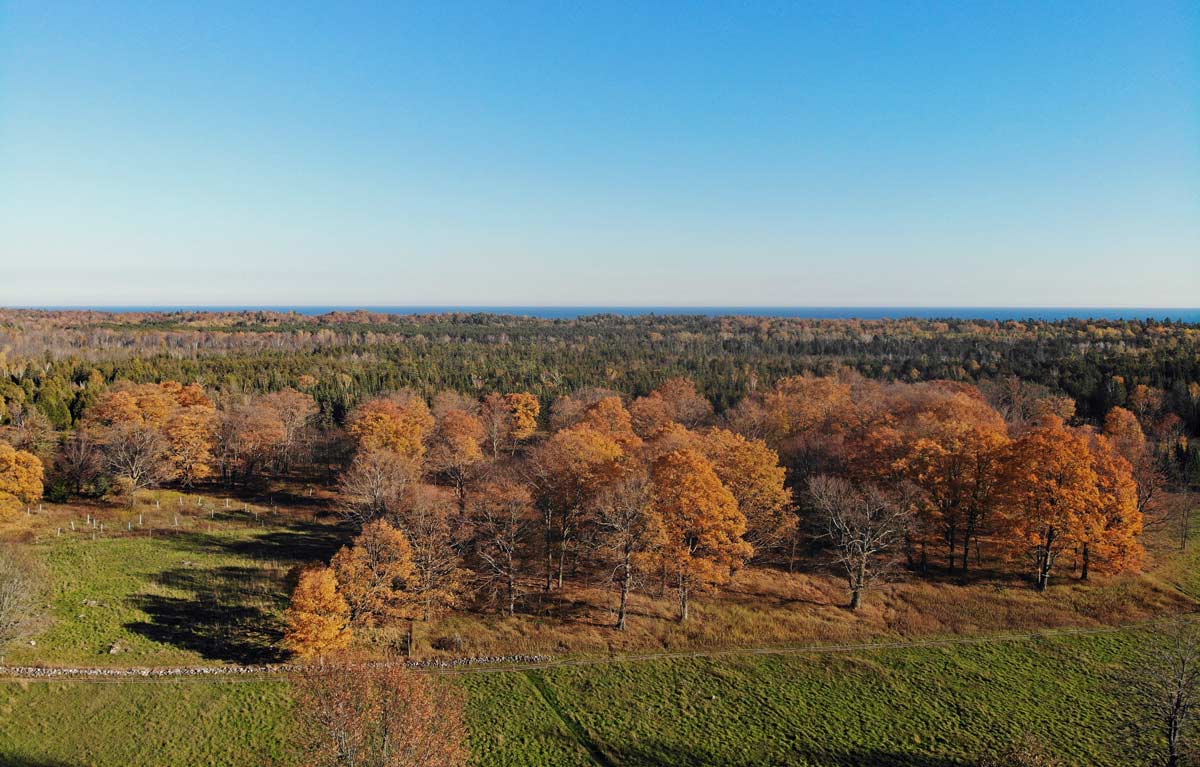 Within another week’s time we experienced heavy rains and strong winds. And with that weather the deciduous trees were bare! Interestingly, if I could again take to the air now there would still be some bright yellows showing up in the distance of this last image, despite the snows. The tamaracks decided to coordinate their late fall bright yellow show with great success.

During this time we still managed to keep the sheep on pasture, at least in the dry weather. Two heavy, hard frosts were enough to cause all sorts of trouble with the water lines to the pasture. It was therefore time to call it quits with the grazing season. I had yet to clean the old bedding out of the barn. It was a crazy three days, but my trusty skidloader, Gehl and I got every thing cleaned up and re-bedded. Once the sheep moved into the barn for the winter I just managed to roll up all the removable fences and haul all the fencing, removable posts, and portable water buckets in for winter storage. With that done, all that remained was to drain the outdoor pipes when it was warm enough to completely thaw all of them.

Actually, I did have additional help with the barn clean-up. On the morning of the last day of that project, I had gotten the sheep out to pasture, had breakfast and was back in the barn moving some of the in-barn feeders in preparation for scraping the area with the skidloader. I was just about to hop into the skidloader when I realized that I had company.  Not more than thirty feet away I noticed a Ruffed Grouse calmly sitting on one of the old dairy stanchion pipes. I walked back to the house to get my camera and returned to find that my friend had not moved. 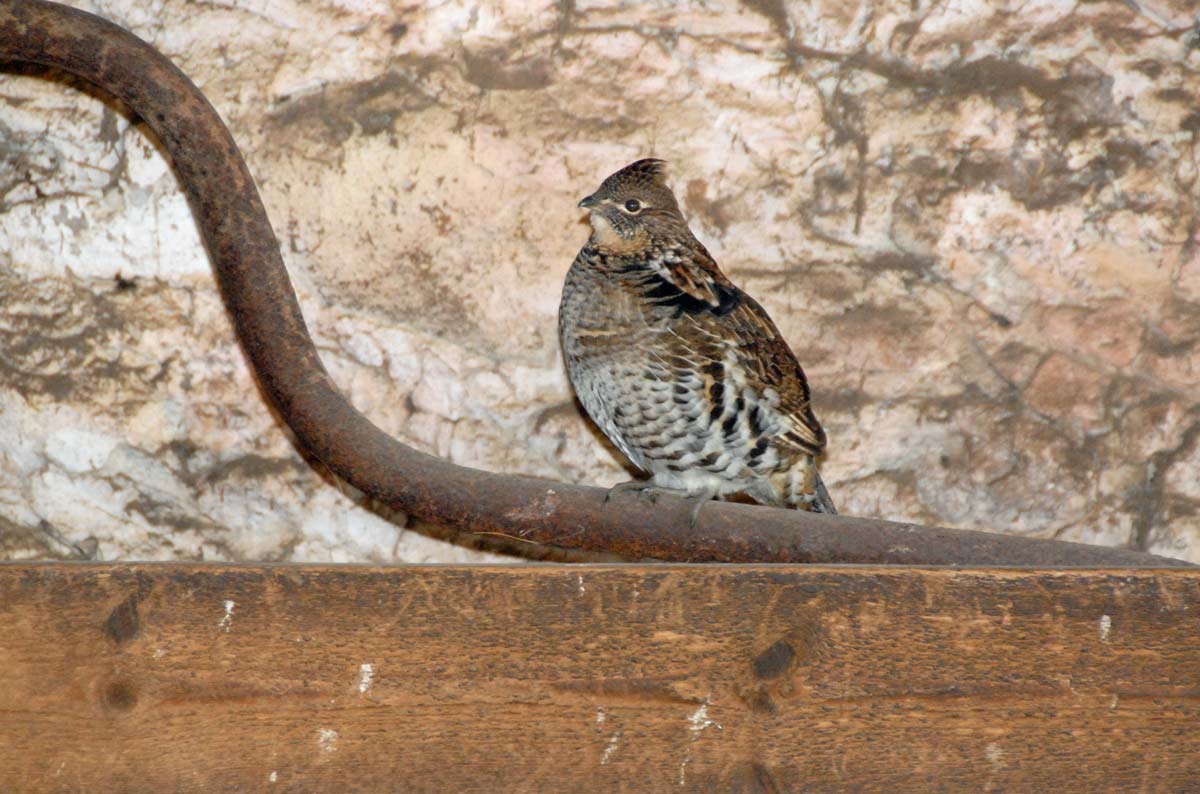 I managed to get within 10 feet of the bird before he got nervous. 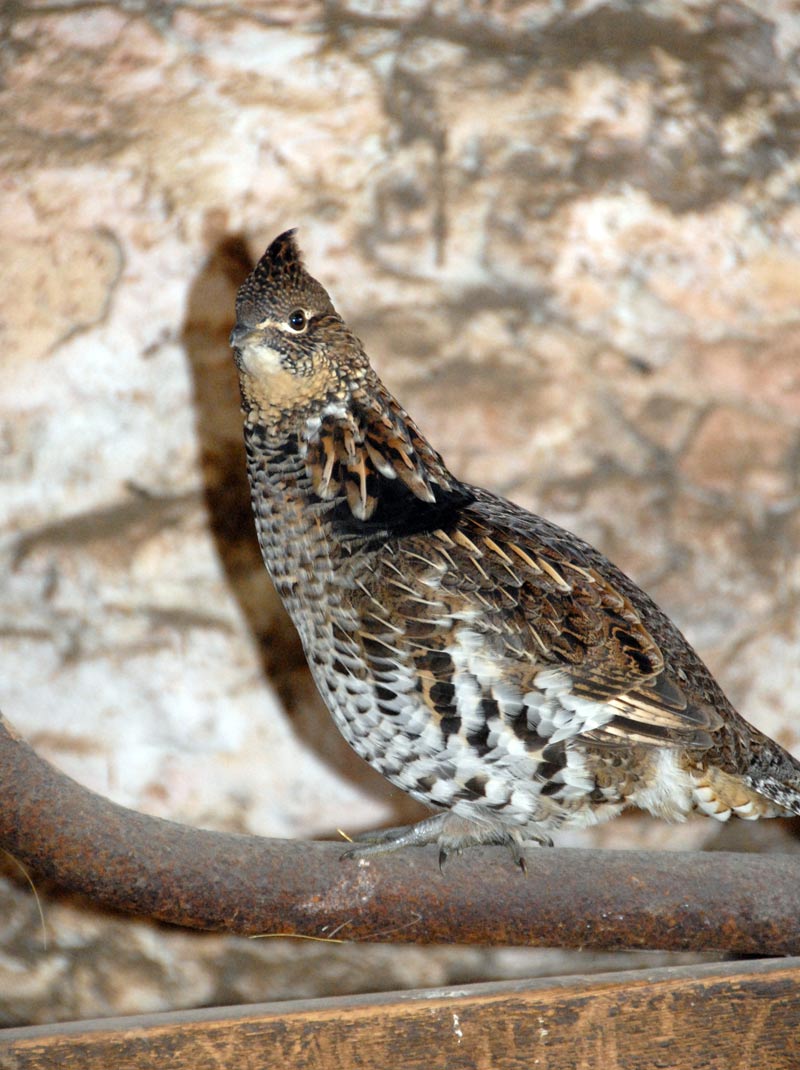 So my erstwhile helper/spectator decided to beat a hasty retreated, but not through the door to the outside, but up the stairs into the hay mow. It was the last I saw of him. It is interesting how secretive the Grouse are. I know they are here, at least in small numbers, because very rarely, over the years, I will spook them in our woods. But to find one in the barn is very unusual. However, the corner in which he was sitting, is also the corner where our grain bin unloads. I wonder if he was there to pick up the random corn and oats on the floor. Which then makes me wonder if he has been a regular visitor without my knowledge. I guess I will just have to ask the next time we meet.