Happy Birthdays, good days and not so good

It seems as though I started to write this entry just a few days ago. My intention was to wish Hope a Happy Birthday and have the greeting prepared ahead of time, so that on March 8th we could publicly celebrate Hope’s 15th birthday. We managed an “in-barn” party, but that was it. Now it is three weeks later! The public celebration is a bit delayed. For those of you not into sheep longevity, I should point out that 15 years is a substantial age. Hope is still going strong. She may be a bit smaller than she was at an earlier age and a bit slower. Nonetheless, she still is the “official hay tester”, sampling every slab of hay before it is delivered to a feeder somewhere in the barn. For her services she receives an extra helping of grain each day (just don’t tell the rest of the flock, it is just our secret). 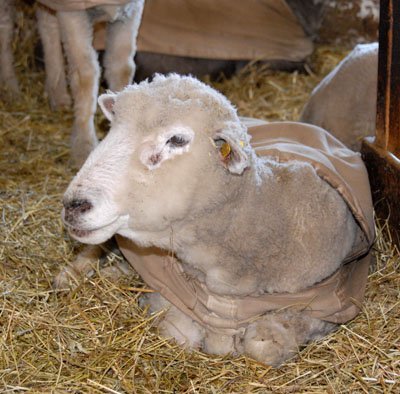 The reason for trying to celebrate Hope’s birthday on time was that it preceded, by a day, the scheduled arrival of this year’s first lambs. Scheduling is not something at which sheep excel however. This year the first lamb arrived on March 7th. Unfortunately the first birth was not one of those expected, but rather a ewe lamb premature by at least seven days. Her mom, Whosits, did a good job with the lamb, especially considering that she was a first time mother. The two of them plugged along well enough, but it also became obvious that the lamb (who we dubbed “Atagirl”) was not functioning normally. At 19 days of age she died quietly. It took Whosits at least two days to stop searching for her.

Once Whosits had lambed, we had a day for Hope’s celebration. The next day the proverbial flood gates opened. Since the 9th of March the flock has experienced births everyday, except two, and it is now the 29th of March. As I write we have seen 83 lambs born and we await the last five pregnant ewes, who are due sometime before the 3rd of April. We have had seen some some beautiful lambs born and the vast majority of the moms have done wonderful jobs, especially considering that nearly half of them are first timers. We have had three ewes who were initially befuddled by their lambs’ births and, as a result, did not wish to accept one or all of their offspring. Usually a day or two spent restrained in a stantion is enough to let them calm down and recognize that they are indeed mothers with responsibilities. Two of the three ewes recognized their erring ways and now are truly devoted to their lambs. One mom has proven to be a dead beat. The result is a bottle lamb, Azalea, for the shepherds to care for. She joined a duo of bottle lambs, both of whom were already being bottled because of 1) a milk problem with one mom and 2) a mom who could not count to two and did not make sure her second lamb got enough to drink. 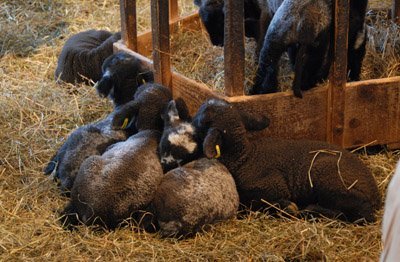 We have also experienced some minor health problems with a couple of ewes, problems which seem to be resolved. Trudi however has had major difficulties since she gave birth to twins. She delivered while standing (which is not that unusual). However, as time passed we realized that she was not lying down (at all!). Initially we suspected a case of mastitis, but that proved not to be the case. Eventually we had one of our vets look at her. He too was befuddled. We could only surmise an internal injury or infection that made it painful for her to lie down. It was not until 9 days after her delivery date that she finally laid down. Whether this was the result of the medication she received or whether it was due to sheer fatigue we do not know. Now we are working from the other extreme, i.e. a ewe who gets up only briefly. Luckily, Trudi has retained a good appetite and thirst. Everyday now she seems to be doing a bit better. It is a slow recovery, but we are hopeful.

It seems to be a year with most of the births occurring in early morning (i.e. around 2 AM). Fatigue is becoming a factor for the two of us. It does not help that we, like Hope, are a bit older than when we first helped with lambing 21 years ago. And by the way I believe that I failed to mention our “little weather event”.

By the first day of spring (the 20th) we had seen the arrival of Robins and Redwings. Sandhill Cranes were flying up the peninsula and flocks of Tundra Swans ferried in from the southeast. It was also warmer, all good signs of spring. Two days later we experienced the “classic” late winter/early spring snow storm, which proved to be extreme. Sixteen inches of heavy, wet snow pushed along by winds gusting out of the east from Lake Michigan at up to 40 miles per hour. We were effectively isolated for three days. The short walk of just one hundred feet or so between the house and the barn was an adventure, especially at 3 AM. When it was over the storm left us with monster snow drifts all over the farm, one of the largest of which ran the entire length of the barn and was at its highest at least 4 to 5 feet. 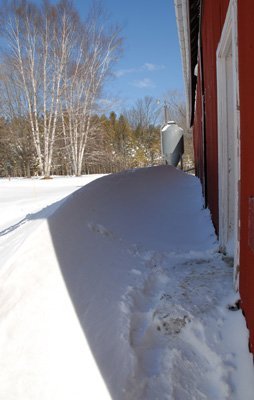 Impassable snow drift on west side of barn

Between dealing with the sheep and lambing and the depth of the snow it took us three days to clear our way to the road. Normally when we experience these late storms the warmer weather quickly returns. This weather pattern is different. We seem to be in a time warp: temperatures are as cold or colder than they were in February. It will be a long while before the remains of this storm have melted. 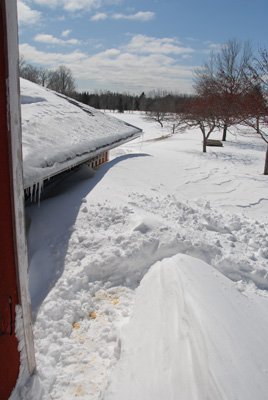 Detour around and through the drift to the barn

The storm and subsequent cold have sapped our energies more than normal. The sheep are getting the care they need, but other tasks have been slowed. For example, Gretchen is still skirting and sorting fleeces. (Fear not faithful fleece customers, we still hope to have them ready for sale by mid-April.) Any hope of making spring repairs to fences and getting pastures ready remain buried in snow. But we have had many birthdays to cheer us, especially Hope’s. Happy Birthday Hope!!