The seasons are definitely beginning to show signs of changing at Whitefish Bay Farm. There are touches of reds and yellows already appearing in the sugar maples. After bountiful and very timely rains in August, September has remained sunny every day, save for dense ground fog nearly every evening and into early morning. 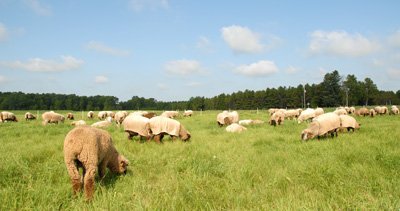 The August rains did give our hay fields and pastures a good kick in the pants. They put on a phenomenal spurt of growth which was very welcome. Earlier we were concerned that we would not have enough hay for the sheep to make it through the winter. Suddenly we were able to cut and bale hay that a month earlier was non-existent. Between what we baled ourselves and what we were able to purchase from neighboring friends and diary farmers we are now comfortable for the rest of the year with the barn nearly full.

Our poor vegetable garden has become totally confused this summer. Much of our crops have struggled to reach maturity. All our tomatoes are still generally green. Melons and onions are as they would be expected in early July. This spring we planted an entire package of cosmos seeds in a corner of the garden. (They were one 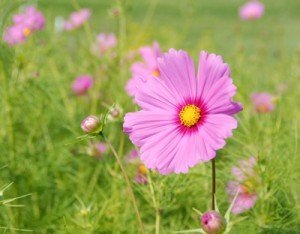 of the “free” packages that we received with one of our seed orders). Our intention was that we would harvest the blossoms for use in our dye pot. Initially they refused to germinate. Once they finally did sprout all they produced was a solid, tall wall of foliage. The late summer rains have now done the trick. The vegetable garden is now at least a visual treat. The cosmos seem to be blooming faster than we can pick and freeze them. In the future we will report on their dying project. 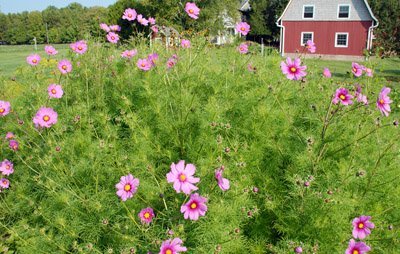 The Art Gallery is now in its final exhibit of the season. As part of the International Year of Natural Fibers, we are featuring the work of all of our current fiber artists, plus additional work from fiber artists who have exhibited with us in the past. Besides some lovely finished pieces, we have a wonderful selection of yarns, both hand spun and mill spun. Serendipitously, the fall issue of Door County Living Magazine has featured the Gallery with a wonderful article and photos. The magazine is available free through out the county. We wish to thank Madeline, Paige and Dan for the wonderful job they did. The article will presumably also appear online when the winter issue is published.

Lest it seem that we never get away from the farm (after all there is little reason to leave), we did spend a lovely, sunny afternoon hiking with old friends at Whitefish Dunes State Park. A lovelier day could not be asked for! 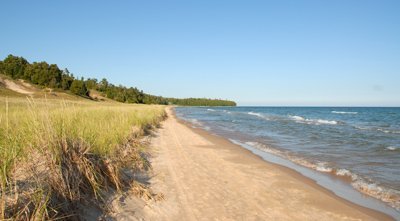