Herding Skunks and Searching for Rain

At Whitefish Bay Farm we are not immune to the extremes of weather which seem to be hammering much of the planet. While we are not suffering the extreme heat and drought that has plagued much of Europe, including my friends in Denmark, we are undergoing what is becoming more and more like a classic drought. It has been hot, dry and humid: not weather enjoyed by sheep nor shepherd. A year ago at this time we had received 21 inches of rain since I placed the rain gauge in the garden after the last snows of spring. This year we have received 10.5 inches in the same time period, the vast majority of which occurred before mid-July. Since then we have seen only a half an inch, spread into 3 small “storms” each totaling not much over .1 of an inch. In that same time the high temperatures have nearly always been in the upper 80’s (a few days in the 90’s) and rarely cooling below mid 60’s over night. All this has seemed much less pleasant due to humidity in the upper 80’s to low 90’s.

I try to get the fencing for the day’s grazing set up as early as possible, while the weather is still relatively cool. This situation of high humidity and cooler morning temperatures presents the strange contrast of wet dew on a pasture that is crying for rain. For over two weeks now, first thing as I step out the door I am greeted by another weaver, this time an Orb Weaver spider. 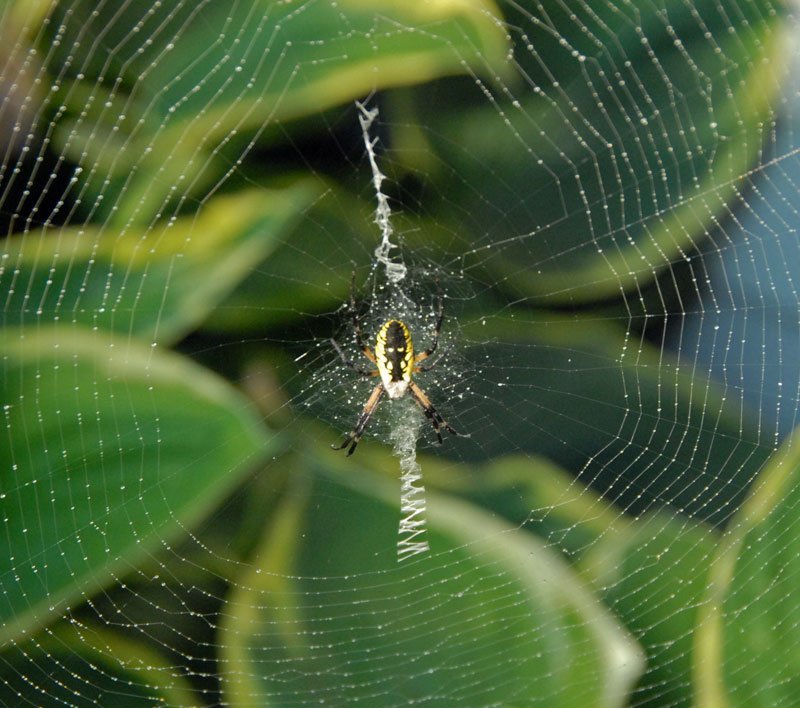 The permanence of the web is partly a testimony to a lack of any heavy downpours! At least there is one weaver here that works everyday.

The permanent pastures have been holding up pretty well, considering how dry it has been. There has been no regrowth after grazing, but there has been sufficient forage to feed the flock relatively well. We have finished the second grazing of pastures #1 and #2, the later just 4 days ago. My early morning fence moving has also presented challenges that I have not experienced in a couple of years. I have needed to herd a skunk or two off the pasture before letting the sheep out. It is usually not too difficult a task, as long as I make sure that the skunk is aware of my presence ahead of time. Then a bit of loud conversation on my part and an occasional clapping of hands sends the skunk on its way, as long as I am not between it and where I figure it will be hiding out for the day. Our local population of skunks tend to like to occupy abandoned woodchuck burrows. This year we seem to have an abundance of empty burrows, since I have yet to see nearly any woodchucks for the first time in 30 years. (I suspect one of our neighbors has poisoned the lot, why I am unsure.) In any case, my most recent skunk encounter was on the last day we were to graze #2. That pasture abuts a sharp rise in elevation which is heavily wooded on the western edge. It has always been home to woodchucks. So it was logical to believe that my skunk friend would head in that direction (which indeed he did). Skunk herding thus seems pretty logical and speedy, since they trot along at a good speed. Thankfully I have not had to herd any porcupines in the last couple of years. That is a slow, meandering process, lacking any definite goal, which can only be aided by occasional prodding with a portable fence post. 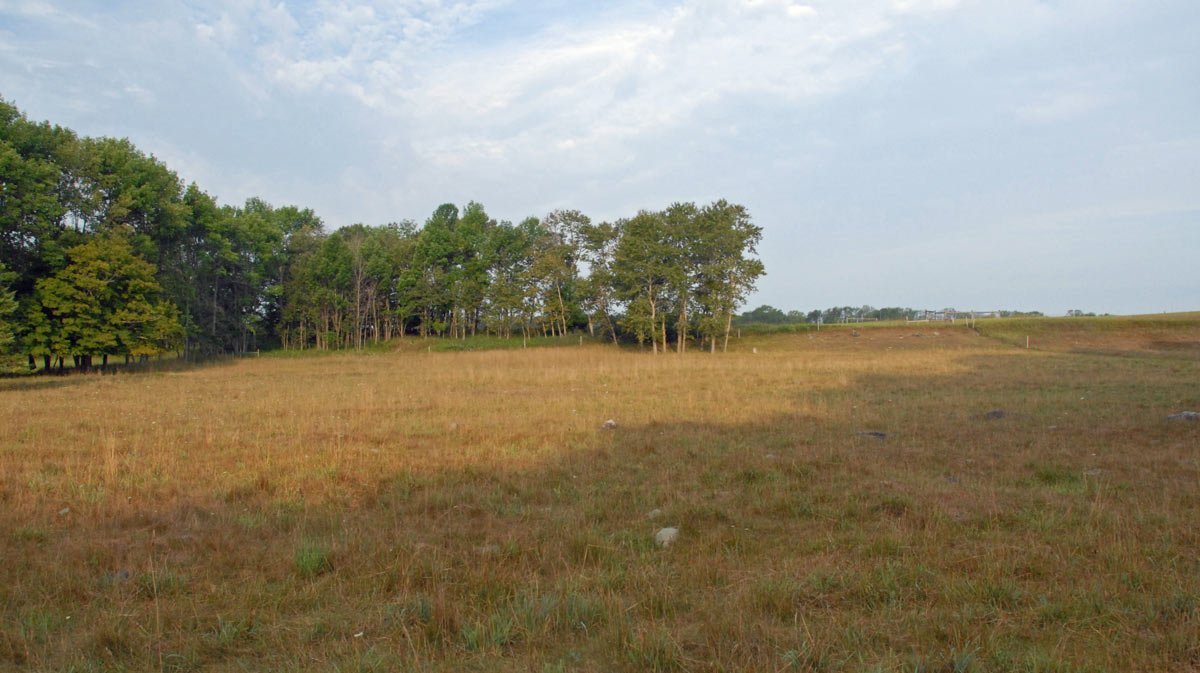 This is what #2 pasture looks like after we spent nine days working our way west. (The woods to the west is where the last skunk headed.) It will take a lot of rain and more moderate temperatures before it can be grazed again. The flock has now moved on to #3 (which is just to the left of this image). This will be the first time we have grazed it this year. Previously we cut and baled it, since in early summer it grew too fast for the sheep to keep up with it. How things can change in a matter of just a few weeks! 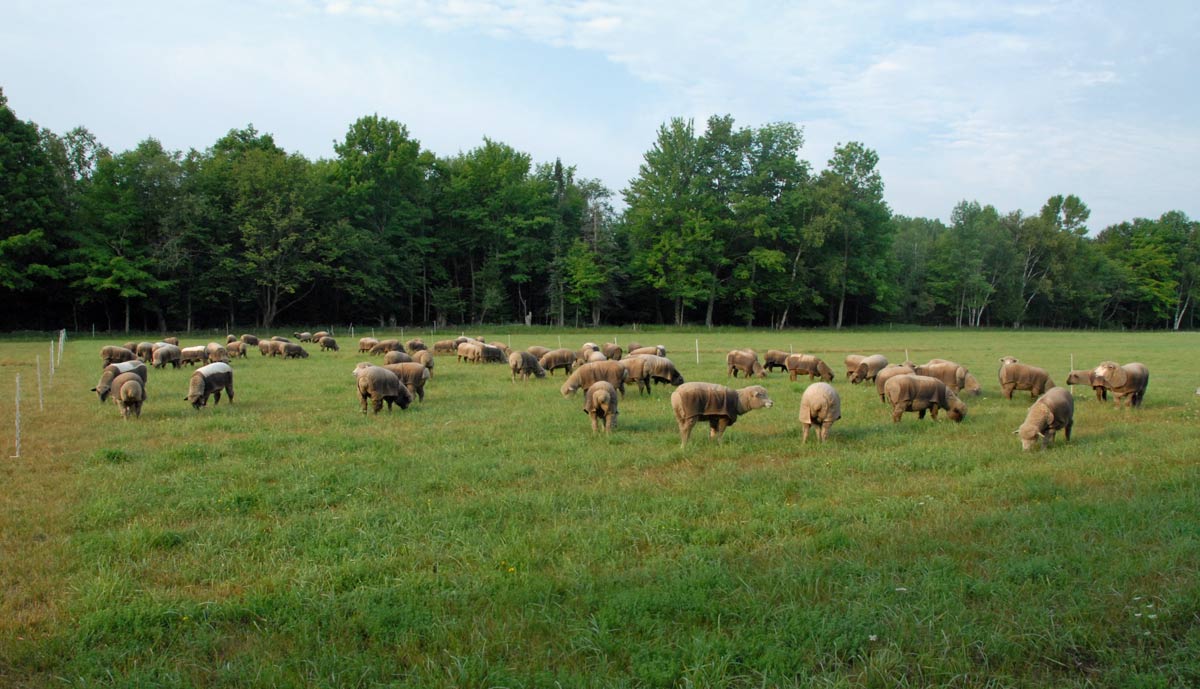 Here the girls have just begun grazing shortly after sunrise yesterday. It is cool enough at that hour that they will get a fair amount of feeding done before the heat becomes uncomfortable. One of the beauties of this pasture, at this time of year, is that there will be enough shade from the trees on both north and south edges that the flock can find some relief from the heat at its worst. This pasture has not had as much time as I would like to recover from when it was cut and baled. As a result, each day’s allotment is a bit larger than normal. This pasture will also need a lot of moisture before it is green and lush again. When the flock has finished here, there is still fairly good grazing to be found on the little pasture down the hill from the barn. Parts of the “orchard pasture” have rebounded enough to be grazed again. Lastly, we can head out to the large hay field with temporary fencing. I am hoping that these remaining pastures will retain enough growth to get us into fall. Too much constant heat and drought can turn any of these pastures into dry toast. If it comes to that we will need to start feeding some of our round bales on pasture. Hopefully we will not come to that!