In Search of a Christmas Tree

Snow storms seem to be rolling through the neighborhood every other day or so. Saturday, the 20th of December at least provided us with a bit of a respite. For the first time this winter we had time to dig out our snow shoes and go for a bit of a tour around the edge of the main pasture in search of a Christmas tree.

We have quite a large number of fast growing balsam firs on the edges of the woods. It is quite amazing how the little trees seem to spring from nowhere and then in just a couple of years they reach respectable heights. Unfortunately they seem to love the relative lack of competition along the pasture edges. Before too long their lower branches are growing into the electric fences which eventually will result in short circuits in the fence and a resulting lack of protection for the sheep. Around the large hay field if the firs continue to grow they begin to shade out the hay.  Every once in a while the trees need to be removed or at least thinned. At this time of the year we can at least think of the task not so much as “weed removal” but as selecting the “perfect tree”.

We found a nice choice, mid-way along the south edge of the hay field. The tree I had kept an eye on this 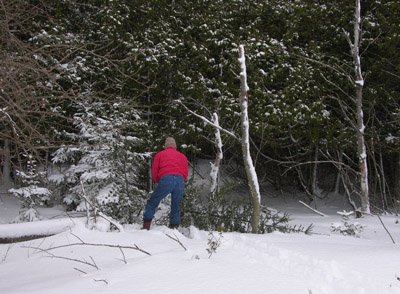 summer as a good candidate proved to be much too tall. (Somehow they seem smaller when driving by on a tractor and concentrating on cutting hay!) Close by we found another more realistic candidate. None of these trees have been trimmed to grow lush and thick. At this location they are also on the north side of the woods so they receive less sunlight and are a bit scrawnier.

The walk home with the tree was a bit slower than the trip out. Even for a small tree it wanted to catch the wind and act as its own rudder, not necessarily in the direction we wished to travel. At least we could retrace our tracks home instead of having to break a new trail in the fresh snow. 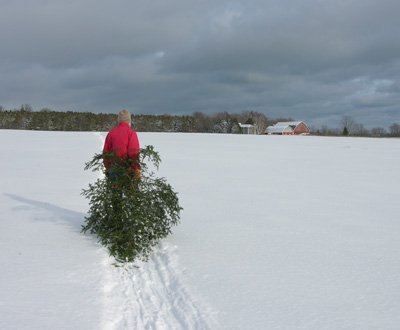 Once home we realized that whatever the tree lacks in elegance it will make up for it with its own personality. Because it is from our own woods it is also a part of us. With its trip home with us the tree brought with it special memories of a hike through deep snow on a crisp winter’s day. A day later and another snow storm has completely covered our tracks across the field.  The tree and its memories will help make Christmas a special time for us.

A Merry Christmas to all friends and family. May Peace be with us all!