Into a New Year

It has been an “on again, off again” winter for us so far. For November we enjoyed a white Thanksgiving, with lots of wonderful snow along with a strong dose of cold weather. Our lowest temperature got down to 3° F (-16° C). Then as December progressed, winter seemed to regress. By Christmas all of the snow had melted. Only now, three days into the new year, have we experienced a good snow fall. More snow and cold are on the way. So far, it has gotten down to 1° F (-17° C), but we are awaiting still colder temperatures.

Strangely, it has either been too cold to do a number of outdoor tasks or it has been too muddy. We will be glad when we are consistently head in one direction. Due to the conditions outside we have kept busy indoors. Gretchen’s first fabric woven from her Indigo dyed yarn project is off her loom and in its final form: Pillows. 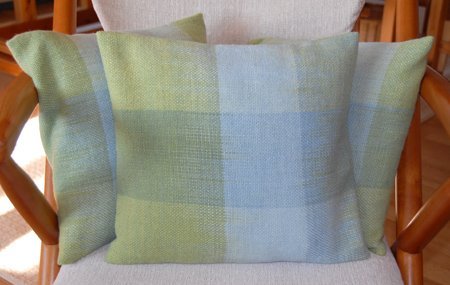 It was an eventful project, complete with some unexpected surprises with the final dyeing results. But I believe she is happy with the project, despite some of the frustrations that occurred.

My winter weaving project is a series of blankets, woven with different shades of our natural colored yarn. The pattern is based upon an old Latvian snowflake pattern. Here is a portion of the second blanket, nearing completion on the loom. 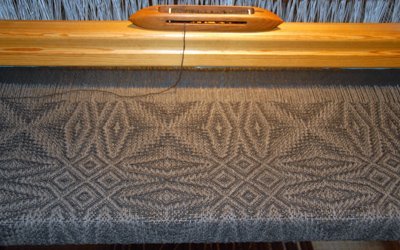 For a time I was beginning to feel as if these were going to be the only snowflakes that I saw this winter. Just after this blanket came off the loom is when it began to snow once again. Hopefully the view out the window from my loom will continue in that fashion for a time.

While warmer weather is still a long ways off, we will be faced with a number of projects this spring which should keep both of us out of mischief. We have scheduled to have the barn professionally painted after too many years of neglect in that regard. It took us nearly a year to get on the painter’s schedule! The house also needs painting. The last time it was painted, the two of us did all of the work. It was a monumental task for us at that time. We decided that with age, we were no longer cut out for the job, so we have contracted with a different painting crew for that job, also this spring.

Those are the two planned projects. Then there are those that are unplanned. One example occurred when cleaning the sheep level of the barn in fall, I discovered that the bases of a couple of the steel posts were rusting and corroding at a rapid rate. The posts support the main center beam which in turn supports the hay mow floor above along with the wooden posts that support the roof above the mow. Here are 5 of the 6 posts right after I finished cleaning the barn. 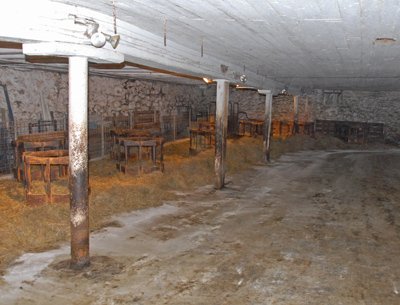 A combined 109 years of cow poop and pee and sheep poop and pee have finally been too much for the bases of the posts. This is the base of the worst of the posts. It has actually shifted about 4 inches of its proper location. The extra wooden post added beside it many years ago is also being crushed by the weight above it. 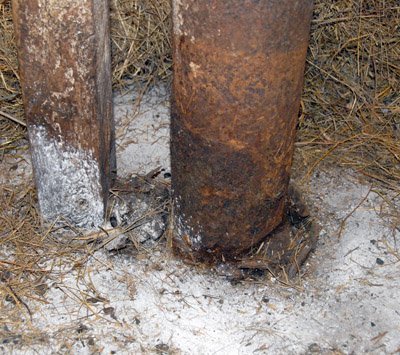 For the time being, we have supported the weakest posts with additional floor jacks. Unfortunately we cannot replace the posts until we can jack up the beam high enough to free the posts. When we began the winter indoor feeding for the sheep, there were about 3000 bales (60 tons) of hay stored in 3 main sections of the hay mow. We will need to get rid of that load before we can hope to raise the beam. So far, the sheep have eaten nearly one complete section of hay, but they have a ways to go before we can think about the major task ahead of us. In the meantime we all have to just work our ways around the extra posts holding everything together. 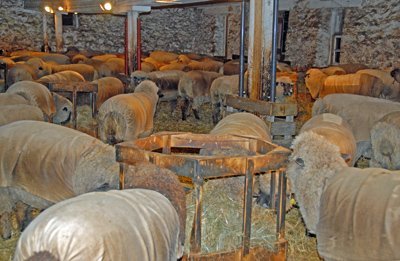