It has been Hot

As in so much of this country, the last couple of weeks here has been much warmer than normal. Luckily for us, living on a relatively narrow spit of land, which sticks out into a very large lake, usually has a moderating effect. We have moaned and groaned about the conditions here…at least until we hear about how much warmer it is in the rest of Wisconsin (not to mention farther south and east!).

We managed to set up pastures for the sheep which at least afforded them some shade nearly every day. On a couple of occasions when the humidity was also high it was apparent that the flock was uncomfortable. They did however have lots of fresh water and good grazing. As a result, they have coped with the worst of the heat. As of this morning the temperatures are finally moderating here.

Unlike the sensible sheep, the stubborn shepherd was stuck in the midst of haying when the temperatures skyrocketed. It is amazing how quickly a cutting of hay dries under these conditions. I usually figure that after cutting, the hay will need at least two additional days to dry down enough to bale. Last week I was cutting hay one afternoon and baling it less than 48 hours later. In this weather it is not much fun stacking bales on the wagon as they come out of the baler. (Thank you Larry for all the help in that regard!) 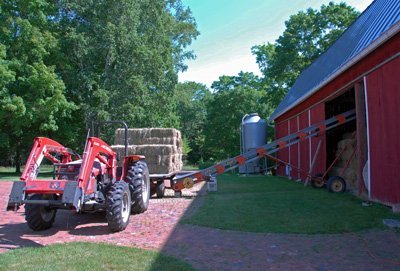 Stacking these same bales in the barn is a sweaty experience, especially as a mow fills closer to the top. Often we would bale one afternoon and wait until the next morning to unload. The barn is a bit cooler at that hour. Unloading cannot proceed until the wagon has officially passed inspection. After climbing to the top of each wagon Pussa wasted no time getting back down and headed for the shade. 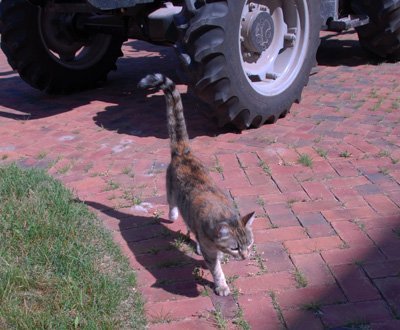 We still teeter on the edge of a severe drought. We were lucky to get rain totaling nearly an inch in two days mid-week. Half an inch of that moisture fell on newly cut hay. (As a result of that rain this hay lost some nutrient value, but once the rain passed it dried enough to bale in just over a day!)

Under these conditions it helps to look for positives. It seems to be a wonderfully productive summer for butterflies. Sitting in the shade on the front porch lets us watch a regular lepidopteran parade in the front flower garden. This Great Spangled Fritillary seemed to spend the afternoon there and was much too busy collecting nectar to be bothered by the camera’s presence. 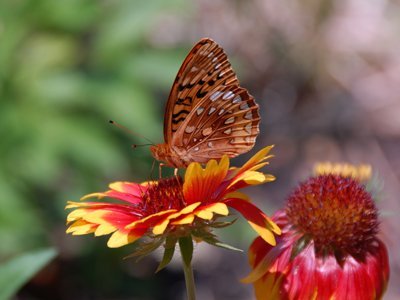 We have also had non-paying extra guests join us for breakfast at the B&B. At least one and sometimes two White-tailed fawns have leisurely walked passed the dining room windows this week. The twins seem to be hanging out most of the time very near the house. On one of the hotter afternoons I had to herd them away from the road for their own safety. They ended up in the shade of an ash, just behind the vegetable garden. So far the garden has remained off-limits! 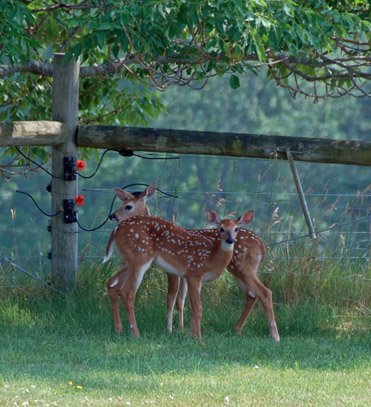