It is Shearing Time Again

I am currently confined to the house by bad weather. Actually the storm has proven to be less catastrophic than predicted. It was supposed to be a blizzard, with 8 to 14 inches of snow and 40 mph winds. The wind is here, but the snowfall has, so far, been more in the range of 6 inches. It is supposed to be over by tomorrow, so I am going to wait until then to shovel out. In the meantime I will try to catch up with recent events at the farm.

We had intentionally scheduled shearing for later than we have done in the past. Unfortunately, schedules got messed up and the dates were pushed back another week. At the last moment we were also faced by the possible loss of our shearer! David was diagnosed with a torn rotator cuff; shearing is now not on his immediate future menu. Luckily he was able to hook us up with Dylan, one of his former students. So we were good to go on March 11th and 12th.

Weather wise we were very lucky. Temperatures were way above normal before and during shearing. I managed to get the shearing area cleaned out ahead of time. (It normally is part of the flock’s loafing area.) 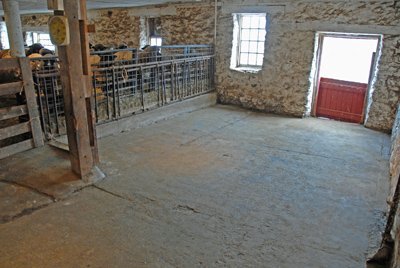 Here it is, all cleaned up, awaiting equipment, our shearing crew and, of course, sheep. Actually, my couple of day’s clean up labor had lots of supervisors. The girls, just on the other side of the fence, were very attentive the entire time.

The sheep were definitely ready for shearing. They were fully fleeced, some in need of larger coats. Despite us having trimmed faces in the recent past, many were also dealing with limited forward vision. 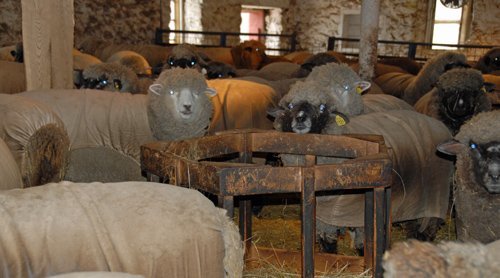 In addition, all the facial wool was a magnet for all sorts of hay from their feeders. It is obvious from the following photos why we jacket our flock to keep the main portions of the fleeces clean. So here is a collection of some good friends. awaiting shearing. 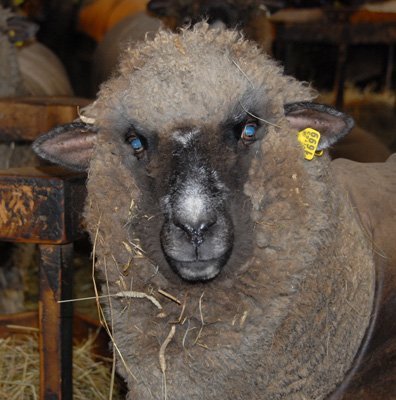 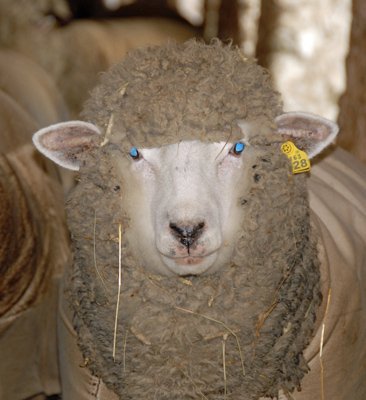 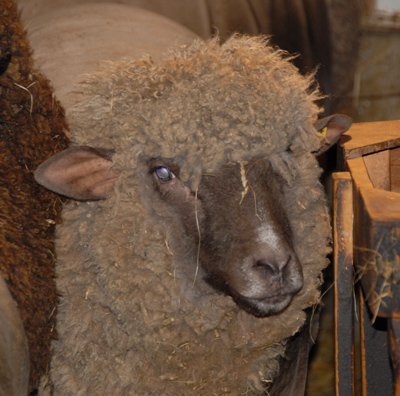 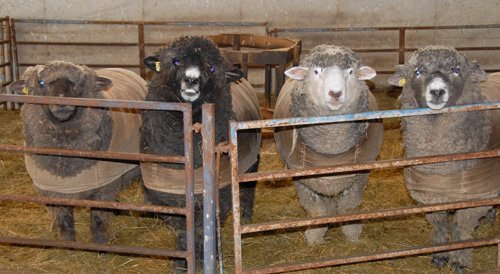 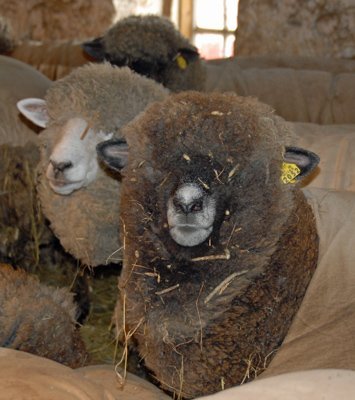 Cecily definitely has the most wool on her face (this after having had at least three trims since summer!)

Shearing went well. We were finished in two full days of work. Gretchen and I could not have done it alone. In addition to Dylan, we had a crack crew of five. Here are some of the crew with shearing in full force, Gretchen and Sandy, doing the preliminary skirting of a fleece that just came off a sheep while another sheep is being shorn. 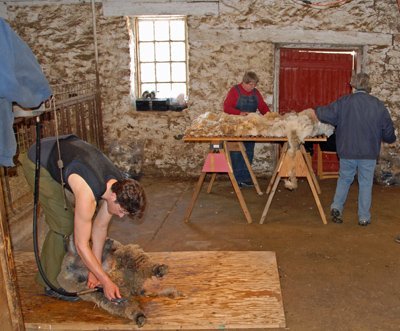 Missing from the picture is myself and Russ. We are catching the next sheep and removing her coat. Meanwhile Donna is sweeping the shearing area clean so that the fleeces are not contaminated. Donna also sees to it that each fleece is properly identified when it is bagged after shearing. Helen is up at the house making sure that we are all going to be well feed at midday.

Toward the end of the second day Dylan is finishing by shearing the rams. This is Aries, about half shorn. 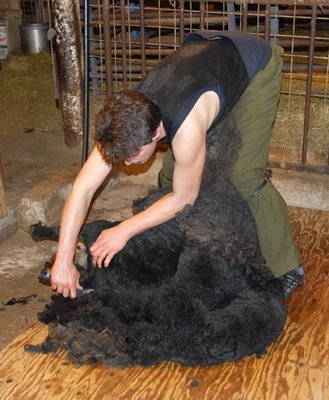 Lastly, here is the obligatory crew photo (sans the Grumpy Shepherd). They still look to be in pretty good shape! (However, please note that when this was taken there were still quite a few sheep in the background yet to be shorn.) 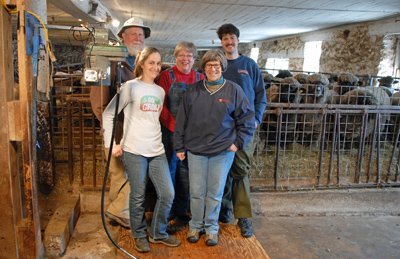 When we were finished, everyone (human and ovine) was tired. I do think there were some happy sheep, especially the likes of Cecily. When one compares the “before” and “after” you would hardly know they were the same sheep. 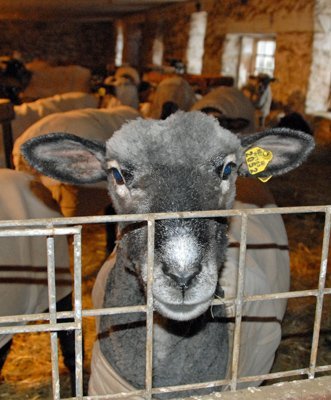 The day after shearing was complete we manage to get the entire flock (119 sheep) back into clean jackets, all of which are much smaller to accommodate their smaller dimensions. In the same process everyone gets their annual booster shots against tetanus and clostridial diseases. Everyone is much hungrier and a lot more hay and grain are now consumed. 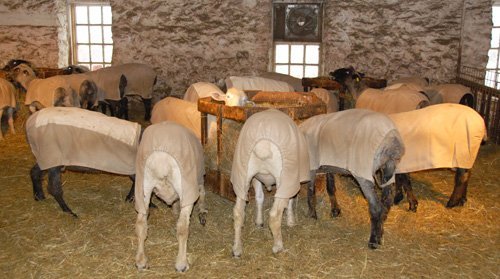 The weather continued to cooperate for a couple more days. Some of the Georgia/North Carolina contingent of the crew took an afternoon off to hike along the shore at Whitefish Dunes State park. 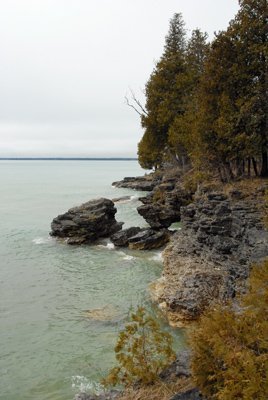 There was hardly a breeze blowing and nearly all of winter’s snow had melted. There is still energy in those young arms! It is also hard to believe that these scenes are now thoroughly buried in snow again! 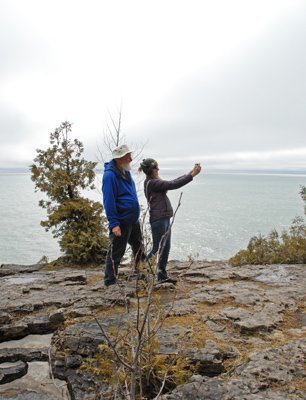 For our fleece customers, here is what you may be wondering about the near future. We (especially Gretchen) is diligently doing a final skirting on all the fleeces. As usual our work space permits us to finish 7 fleeces a day, and we are well into the total number of fleeces. When we are done, we will evaluate, weigh and price all the fleeces. Some time in mid to late April we will be contacting all of last year’s customers to determine if they wish to reserve the same fleece from the previous year. Once we know that information we will set a date for selling the rest. When we have a date, we will notify all of our customers from the last few years, along with anyone who has asked to be on our mailing list us over the last year or so. Stay tuned!