It is time to make hay

We have entered that time of late spring/early summer when life tends to rush forward at break-neck speed. Three weeks ago the sugar maples were just breaking open their buds. Now we have a full, green canopy of lush green leaves. The pastures are growing like mad, which means that the sheep are unable to keep up with the growth. I have tried to speed up their rotation through the pastures, but it has not been of much help. Today is the first day of the year that the flock is on the “high ground” in the pasture that we call “the orchard”. It is a good place to be when it is warm (as it is) and the breezes blow strongly enough to keep the bugs at bay (which is happening). It also is one of the tastier places to graze if you are a sheep.

Right next door to “the orchard” is the main field we use for baling our winter hay supply. It is ready for cutting. Had things gone differently I would be out driving “Big Oscar”, the Massey Ferguson tractor, pulling the haybine and cutting hay. However…it rained enough this morning to make it too wet to cut and there is rain in the forecast for tonight. Instead I am at the computer trying to bring the Ewe Turn up to date. I know that it is time to start cutting hay, not only by looking at the hay itself, but because my “friends” the Whitetailed Deer tell me that it is time. The does tend to deliver their fawns about a week before the hay is ready. Inevitably, when the fawns are at their youngest is when their moms tell them to sit tight and still in the deep grass and thus avoid any detection and danger. Mother Nature did not take into account modern hay making machinery when she set up her spring schedule. As a result it is an extremely difficult and fatiguing task for me, the haybine operator, to be constantly looking for telltale signs of fawns as I circle the hay field.

I know that the fawns are out there as I have already had quite a few encounters with them as I have been setting up the sheep pastures each morning during the last week. The most amazing discovery occurred three days ago. I had finished setting up the pasture for the day, returned to the barn and turned the ewes and their lambs loose. The first one hundred or so yards of their trip out to pasture is always especially noisy, rapid and a little chaotic. That morning the turn-out was quite normal. As usual, I am left behind to bring up the rear of the parade. Hope makes sure that I am in my place and then she leads me out. By the time I get to the first turn (which is perhaps 50 feet from the barn door) everyone, even the matronly Hope, is far ahead of me. I was surprised as I made that first turn to spot a fawn lying virtually under the electric fence. Not more that 30 seconds previously an almost thundering flock of 200 sheep and lambs had run within one foot of the fawn. Even as I stopped to look at the babe it was nearly impossible to detect it breathing. After getting the sheep set up in their pasture, I returned to let the rams out into the small pasture adjacent to the barn, checked on the fawn and then went to the house to retrieve my camera. So here is a close-up of the little critter. 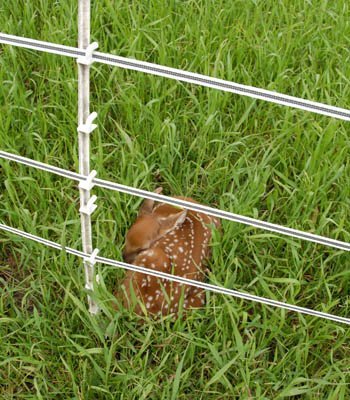 It is virtually impossible to see the fawn in this view looking back to the barn. It is next to the first white post on the left. The path taken by the flock is obvious. 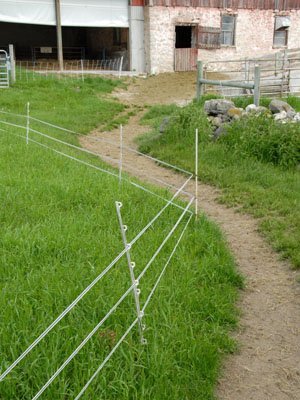 Sometime after noon, mom must have quietly returned to fetch her fawn. When I checked at 1 PM, it was gone. I am guessing that I saw the doe and fawn the next morning as I went out to set up the sheep fence. (This time I planned ahead and had my camera.) In the first pasture a couple of hundred yards along the path there was a fawn nursing on a doe. As can be seen, I got quite close before they took off. I am not sure if this fawn was the one from the previous day because by the time I got to the pasture for the day (pasture #3) there was a second doe with nursing fawn. It is a sure sign that I must be on alert when I finally get the haybine running! (At least I have yet to see any sets of twins!) 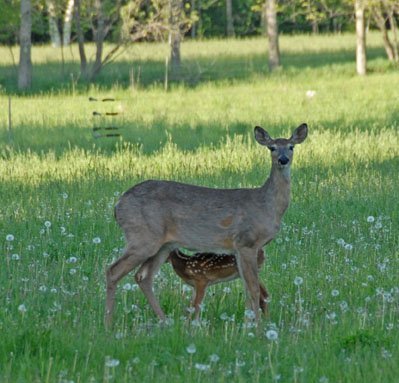 I am hoping that this late spring will let me keep more on schedule than I was able to last year. Last year we received so much rain, spread out over such a long time that I was not able to begin cutting hay until very late June. Even then we were delayed many days by additional rain. Last year’s rain also prevented us from getting the vegetable garden started on a timely basis. As it was we never got everything planted that we planned on. Half the garden was left fallow. About all I could do with that half was periodically cut down the weeds (when it was not raining). This year the garden has already been turned over twice and a load of composted sheep manure worked in. As of this week I actually got the last of the early plantings in. Now I need to wait for the soil to warm up before the last few crops can go in. Last year I did have company while I struggled to plant get what I could. A pair of Bluebirds nested in the box just east of the garden. This spring a pair of Tree Swallows are in that box. The Bluebirds are in one of the boxes to the west. Papa Tree Swallow has kept a close eye on me as I worked. In return he has allowed me to take his portrait. 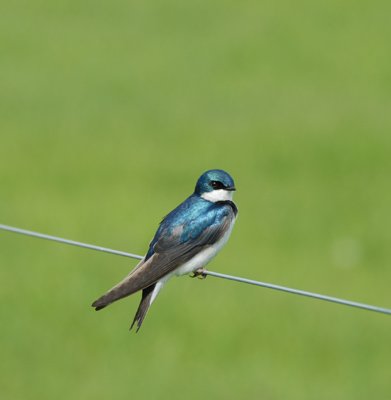