So much has changed here in the last three weeks. The bulk of the changes are attributable to the rain that we have been receiving. If one looks closely at the image in the previous posting, which showed one of the crab apples in bloom at the end of May, it is possible to see that the grass was starting to turn brown. By the first week of June we were starting to fear the possibility of a drought. Any such concerns have been washed away by repeated rains, some quite heavy. We have recorded ten days of the first 26 in June in which we have received measurable rain. The pastures are lush, green and growing faster than the sheep can graze them. In her picture, Trudi has volunteered to show just how deep the grass and clover is in the “Orchard” pasture. 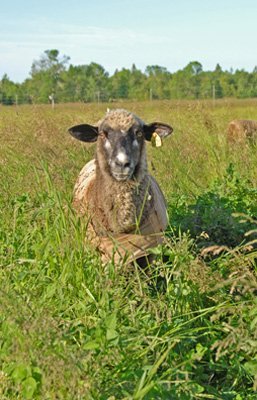 Sometimes it seems that the sheep are as amazed as we are with the way things are growing. The look on Trudi’s face seems to at least express that notion. In reality, the nutritionally quality of the pastures has suffered. The grasses have bolted and are going to seed and the clovers are now advancing toward full bloom. In addition, a fair amount of the forage is being wasted, as the sheep are trampling much that would have been eaten were it not so tall. Nonetheless, Hope is seemingly quite content with her breakfast. At 14 year’s of age Hope is still going strong. She out distances any other member of the flock in terms of age. 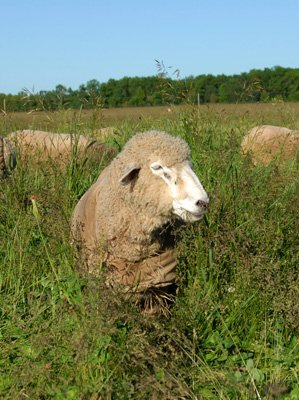 At least the sheep have been able to graze throughout most of the rainy weather. They stayed in the barn (quite grudgingly) on two days, one with nearly two inches of rain and a second with nearly 3 inches. Luckily they had already been on the sections of pasture which tend to puddle up if the ground becomes saturated. We have had much less success attempting to cut and bale our hay. The time between the rains has generally been too short to allow it to dry sufficiently to be baled. To date we have only cut the six outer rounds of our largest hay field. Of those six rounds, four were successfully baled and the remaining two were saturated before we could bale them. (They now have been baled, but only for bedding, as the rain washed any nutritional value from the hay before we could bale it.) The remaining 60 rounds still await to be cut, at a time when we should be finished. 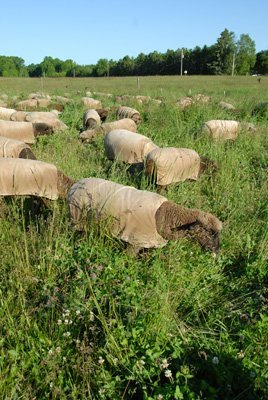 Our vegetable garden has been another near fatality of all the wet weather. We managed to get enough of the ground cultivated to transplant our usual tomatoes, peppers and eggplants. Another break in the weather permitted cultivation of enough area to plant seeds for squash and some of the melons. The remaining two thirds of the space is rank with weeds and currently too damp to cultivate. When and if it ever gets worked over and planted is anyone’s guess at this point. At least the pastures are so thick with food that many of the usual threats to the garden have not attempted any attacks. Our local woodchuck family seems quite content with their territory in the Fourth Pasture (also know as the “Rock Garden”). The largest pile of boulders makes for a cool spot upon which to rest and watch the sun set. As long as Chucky stays there, everyone is happy! 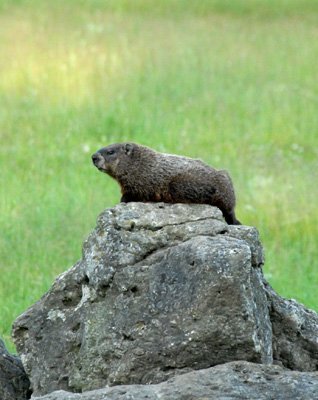