An excessive amount of time has passed since last we posted a Ewe Turn entry. For that we offer many apologies. Life has been a bit crazy for much of this winter, right up to the present. Right now we will not get into our status with the corona virus pandemic, save to report that so far we are coping well. We have the “luxury” of not having the B&B and Gallery open at this time, which lessens the issues with which we currently must deal. Once we get closer to the B&B and Gallery season we will update all of you about our status in this regard.

Mother Nature has had her own special ways of sending us messages this winter. Just before the beginning of December we endured a winter storm which featured heavy, wet snow and freezing rain, accompanied by strong east winds. Many of our cedar trees were “plastered” on their east faces by thick layers of the wet snow. The resulting weight was enough to pull a number of trees down. Most significantly, we lost the clump of cedars that separate the house from the Gallery. Luckily none of the buildings were hit, but the trees were a total loss. Here is what things looked like a couple of days after the storm. 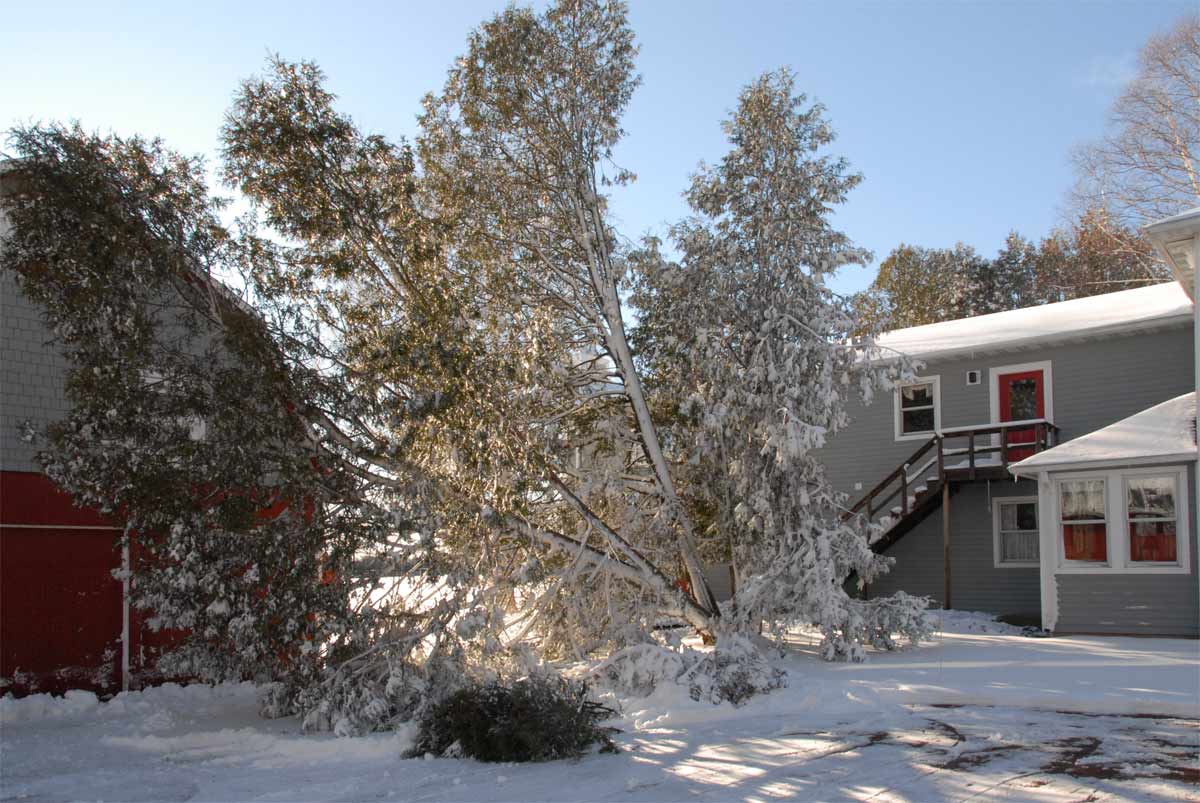 After we got them cut down we counted tree rings. The clump had been here over 60 years. Originally they had been planted next to a machine shed/garage. That building was torn down when we moved and expanded the house in 1984. At that time we managed to salvage most of the clump, which continue to grow over the intervening years. Now sadly we are faced with a gaping landscape “hole” which we will need to fill this spring or summer.

Sometimes things look like awful messes when really they are not. Such was the case with a warp that I had prepared for my larger loom, shortly after the messy snow storm. I had just finished tying the warp onto the loom when this view presented itself. It reminded me of the trees outside, but believe it or not it was truly organized. 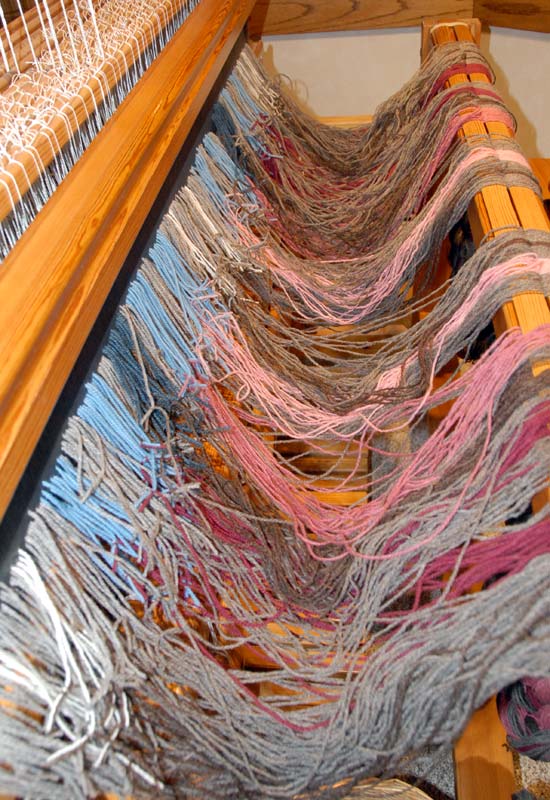 After a lot of knots were tied and the warp was tensioned, the “mess” cleaned itself up. 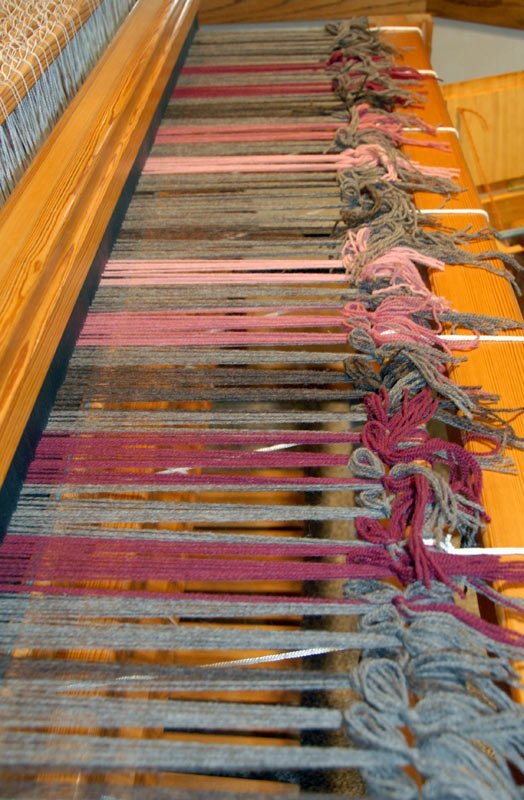 A week or so later this was a finished blanket!

The producers of all of this wool have been busy. Saturday and Sunday of this week we sheared the entire flock. During the three weeks prior to shearing Gretchen and I managed, on warmer days, to trim the hooves of all but 13 of the 71 sheep. They also got their annual booster shots for Tetanus and Clostridial Diseases. The weather cooperated pretty well for shearing itself, in that it was dry and not terribly cold. Even though most of the flock now feels the cold more than they did before shearing I am sure that many of the flock were happy to be sheared, at least in terms of their faces. Visibility was an issue for many, especially for Ainsley! 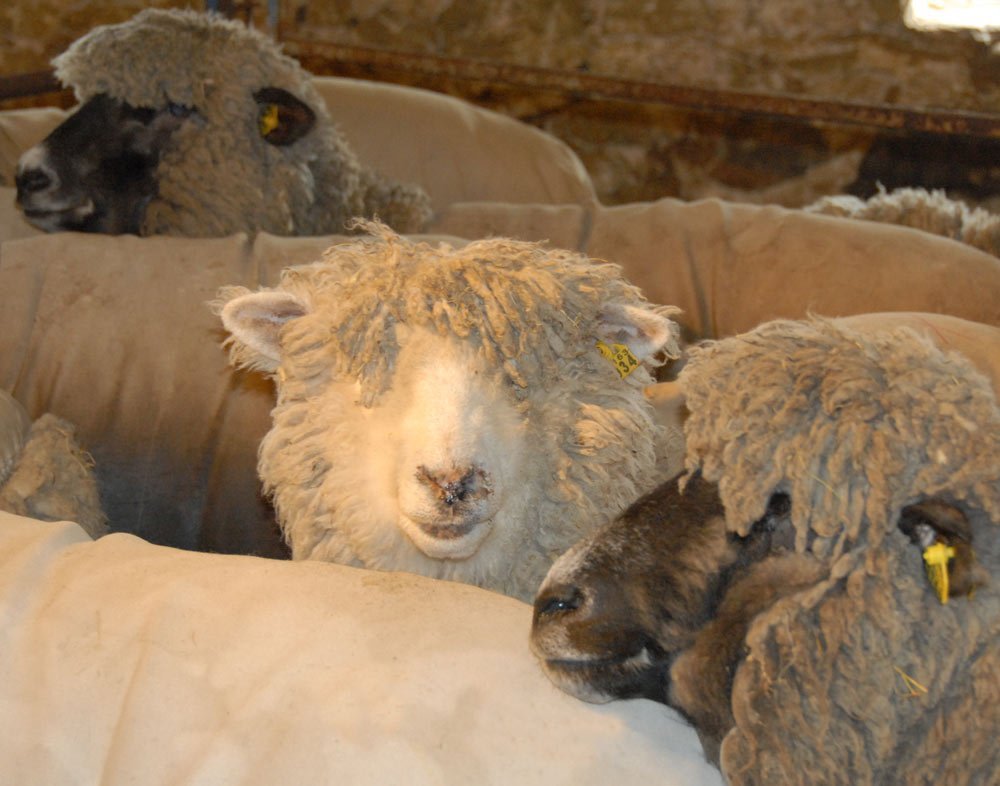 For the flock there is also an annual ritual of sheep that have not been sheared examining the newly sheared and wondering if they really recognize each other any longer. 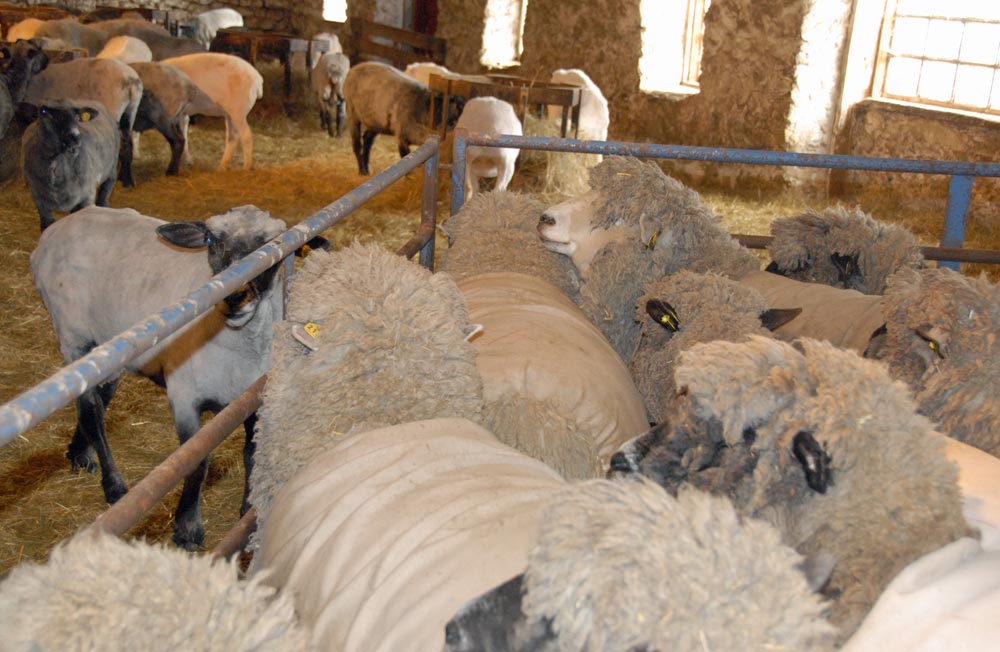 A big meal was especially welcome once shearing was complete. Without the protection of so much wool a lot more hay must be consumed to keep their metabolism producing the necessary energy. Feed intake nearly doubles within a day after shearing. 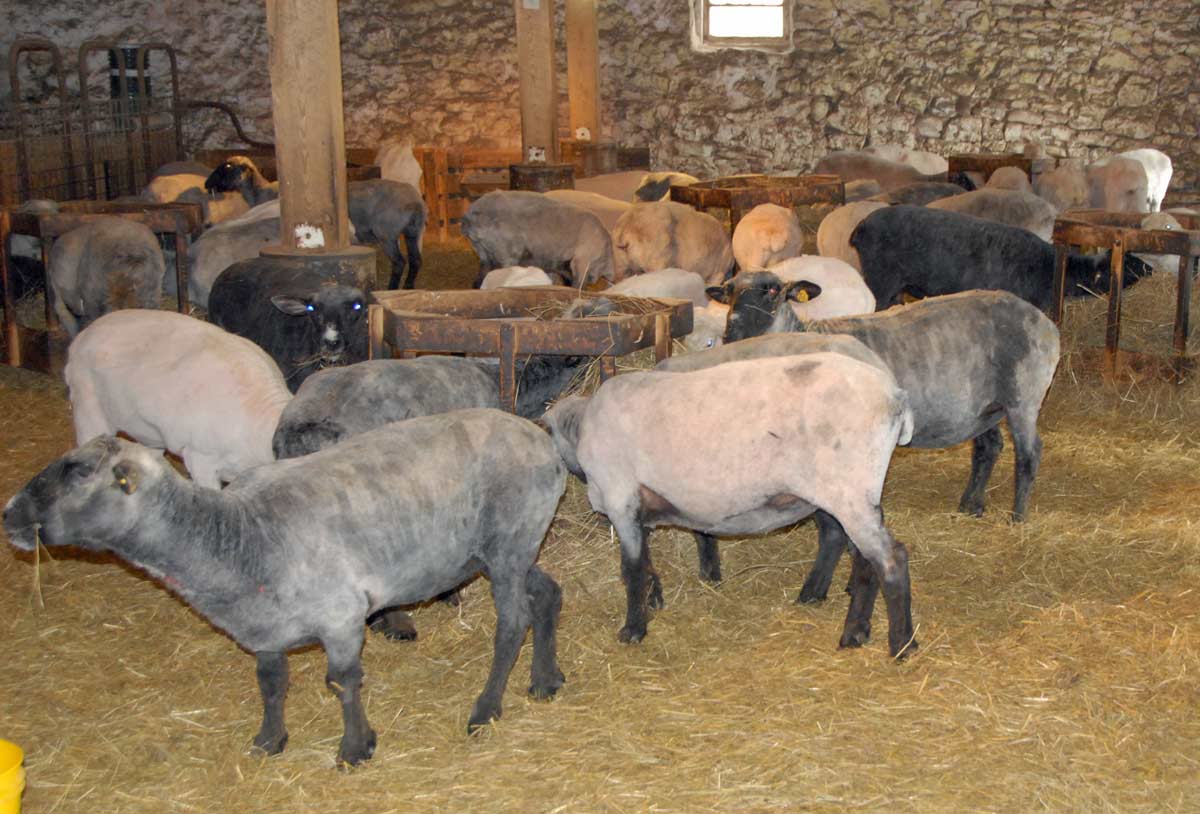 One of the last ewes to be shorn was Yo Yo Baa. Somehow she always manages to be one of the ewes that hides in the back of the pen. Of all of the flock she is one who has an extra amount of wool. It is almost puzzling that she does not want to volunteer early to get ride of all of that wool. (Not even half done, one can hardly see the Yo yo Baa amongst the dense fleece!) 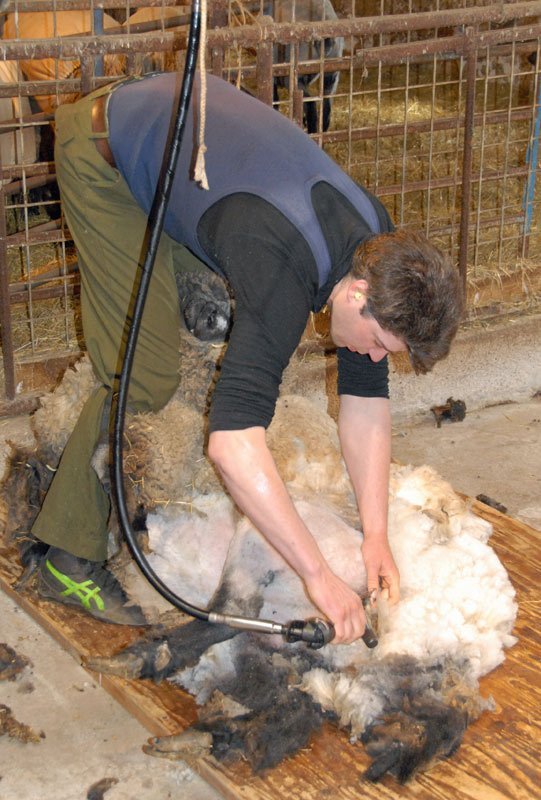 Once the fleece is off the sheep it gets an initial skirting in the barn. Gretchen is just rolling up one of the fleeces after she has separated the good wool from the dirty edges. From here the fleece is bagged and will head for the house where we will do the final skirting in preparation for sale. 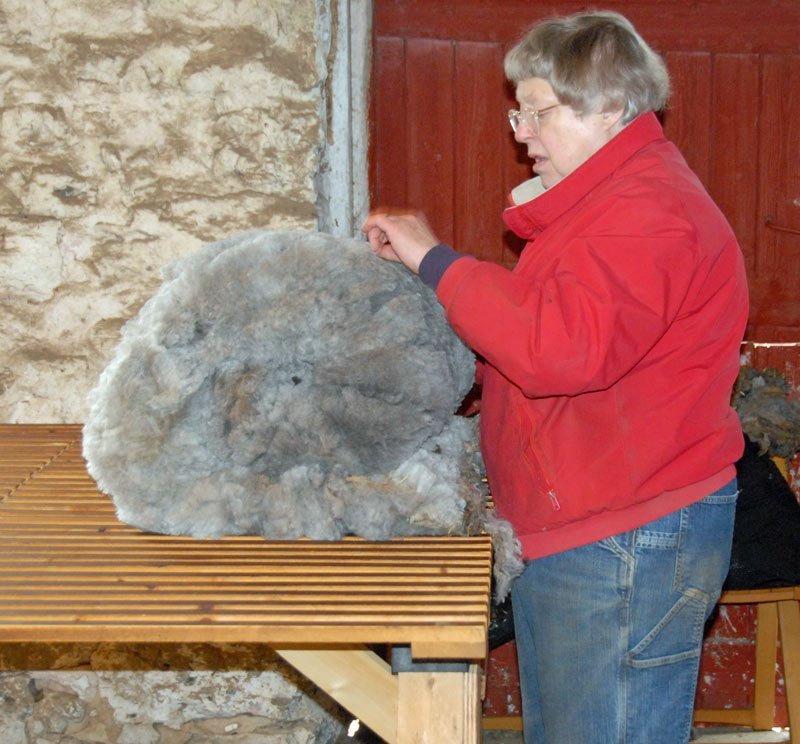 The day following the last of shearing everyone gets fitted with a clean coat, which will protect the fleece from unnecessary dirt and will also provide a bit of extra warmth until each sheep adjusts its thermostat. Needless to say the new coats are all a couple of sizes smaller than what they were wearing just a couple of days previously. 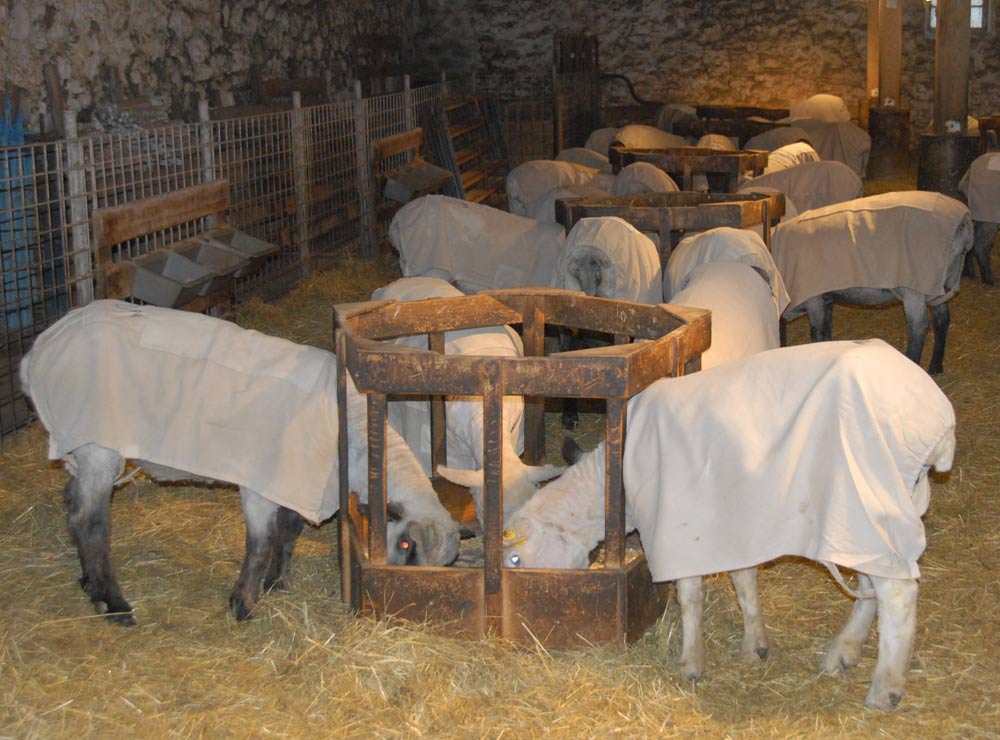 If all goes well, we should have the all the fleeces prepared and ready for sale by mid-April. If you are one of our customers from over the last few years, we will be contacting you as soon as we have finalized the date. If you are not on our mailing list, but wish to be notified of the sale, please send us one of our Fleece Contact Forms (https://whitefishbayfarm.com/fleece-contact-form/).

Now all we need is warmer weather and sunshine!