Our frustrations from June continue! June set records for the amount of rain in the month and for the number of days in which rain was recorded. There have just not been a string of days long enough to get the hay dried if it was cut. I did not manage to cut and bale any hay in June (which was a very real setback). Now with July two-thirds over, I have managed to cut only once, again because of frequent rainy days with very short spells of sun in between. Even that effort was not particularly successful. All the cut hay was rained on slightly before it was ready to bale. We managed to get it dry enough to bale over 300 bales, but before we could bale the last of this hay it was soaked by a 1.5 inch downpour. (Normally, by this time in the summer I hope to have 1500 to 2000 new bales in the barn.) Eventually I got the wet hay dry enough to bale, but by then it was very moldy and a total loss. I had to bale it to get it off the field, but it was 116 bales which I just threw in a pile in a wet corner of the field where it will eventually rot away. Here is the western edge of the big field a couple of days ago. The cut pasture has already regrown so much that it is hard to believe that it was recently cut! 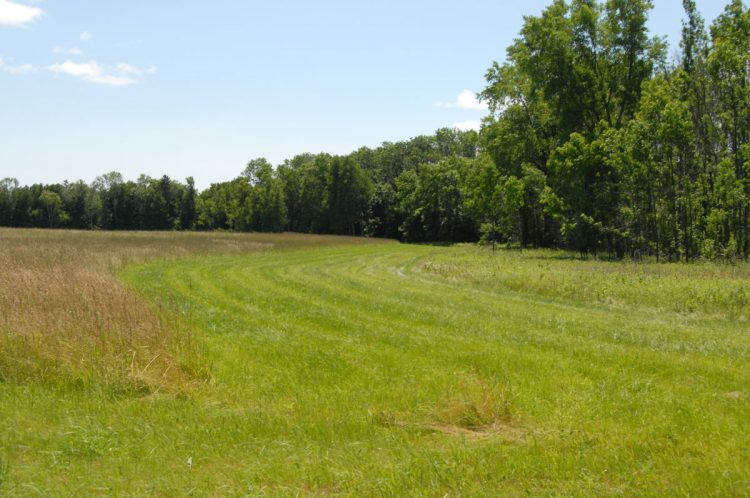 I am keeping my fingers crossed that it will not rain this coming week so that we can get back to making hay.

On the positive side, the rain and warmth seems to have been perfect for the Common Milkweed. I do not believe I have seen so many healthy plants in a long while. It also seems to have been perfect for the Monarch Butterfly population. Their caterpillars feed on the Milkweed, and I have seen a prodigious number of the youngsters on our plants. There is small portion of a large stand of Milkweed on the edge of the field pictured above. 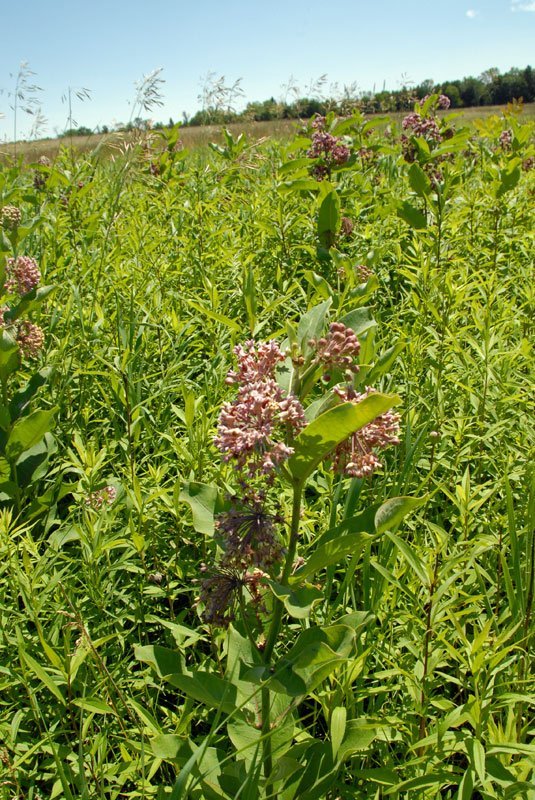 This week I took a walk through the edge of the field toward the woods. Besides the number of Milkweed plants, I was struck by the very pleasant fragrance from their flowers. I am not sure I had noticed the smell previously, probably due to the smaller number of plants. The blossoms are attracting not just the Monarchs but also a large diversity of other butterfly species. Sadly, the number of bees we are seeing continues to dwindle. 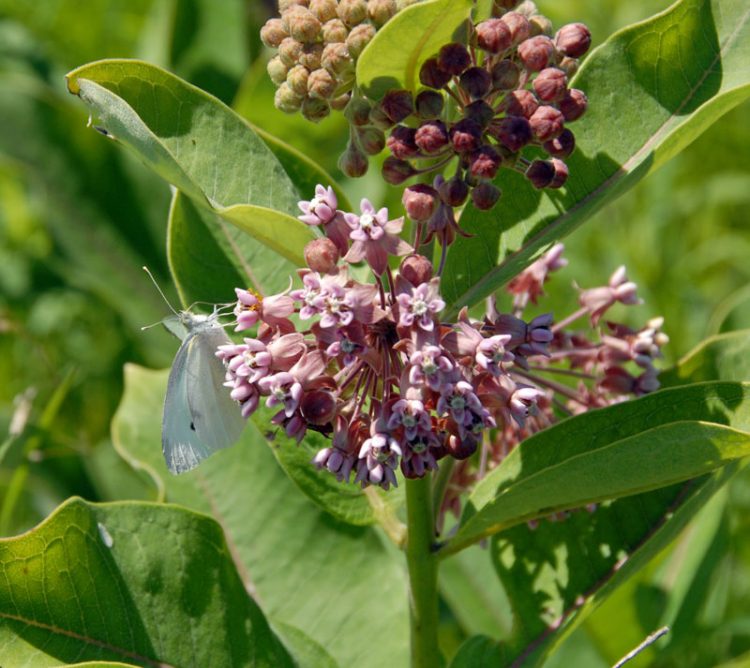 My reason for the walk was to see just how wet our woodlands to the west of the hay field had become. In a normal year, there are always patches of water in the woods. This year there is enough water that I found a couple of patches of cattails growing in the more open areas.

Right at the transition from grass to woods I also discovered a plant that I had never seen growing on our land. It is the Great  St. Johnswort. We have other varieties of St. Johnswort growing on our land, but I have never seen this before. It likes to get its “feet wet” and grows quite tall in this wet area, in this case at least 3 feet high. It was truly a striking bright yellow beacon. 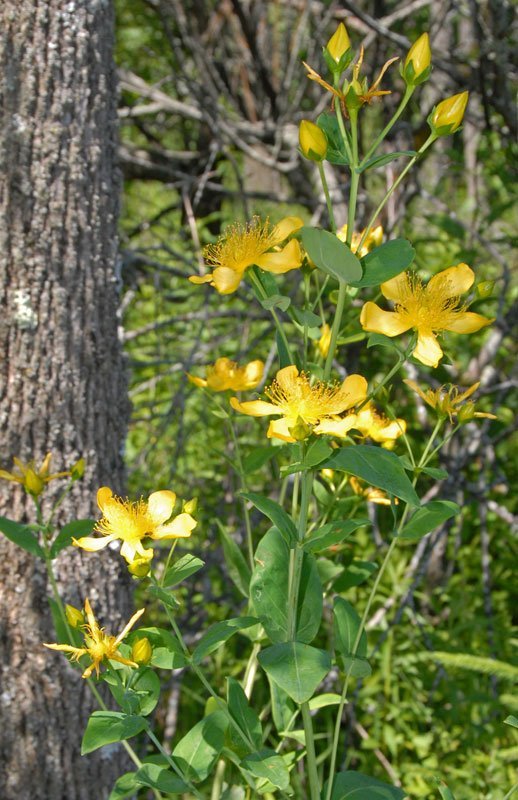 On the other side of the hay field the flock is still managing to graze its way through the “Orchard” pasture. I feel bad for them, since the grass is so tall. Their preference is for something 6 to 8 inches high. Unfortunately for them the pastures are growing so rapidly that the sheep cannot keep up with the growth. It is a strange sight each morning when I take them out to a new patch of pasture. In a few minutes they begin to disappear in the tall grass. 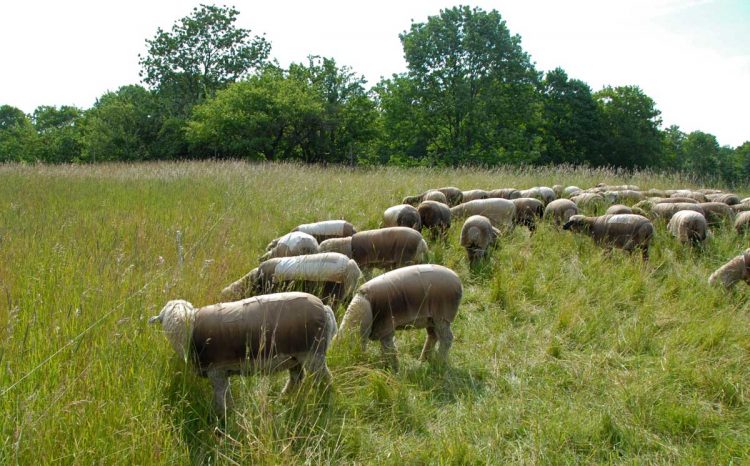 By the time this picture was taken, when our B&B guests got to visit the flock, the sheep had been out for a couple of hours. They had made a dent in the pasture, but there was still lots left for grazing. Sadly, a lot of the pasture is trampled rather than cleanly grazed. Nevertheless the grass and legumes are making a phenomenal recovery, due to all the rain.

Lastly, here is a visit with Toodles, one of the older members of the flock, she is still going strong despite her 11+ years, but on these hot days she needs a drink too. 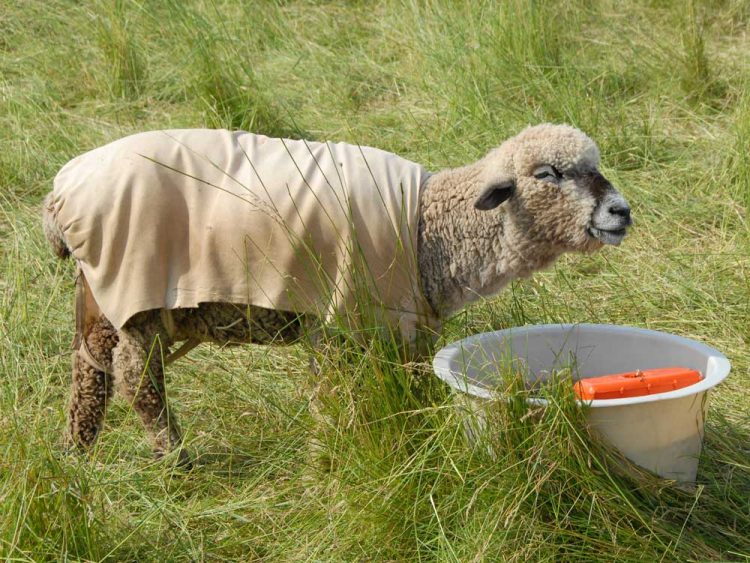