The Slate-Colored Juncos returned to the farm on September 29th. For us that seems to be the surest sign that fall has arrived (just as their departure is confirmation that spring is here). There are fall colors developing in the trees, the temperatures are cooler, but we have yet to experience a frost. The Juncos are definitely our harbingers of fall. They can be relied upon when all the other signs fail. As such, their arrival is sort of an anniversary.

We have experienced a number of significant anniversaries in late summer and early fall. The 13th of August marked 50 years since I began my first day of school in Denmark. It was an exciting and challenging time, especially knowing that less than two months previously I knew not a single word of Danish. I hope that there is a possibility that my tiny class of fellow students get together sometime in the next couple of years to celebrate their successful Student Eksamener, but after this long period of silence it is unlikely to happen.

I did return to Denmark for two weeks in September, as has become my tradition of every other year for the last decade. The visit was both a vacation for me and part of another anniversary celebration. This year my timing was poor in terms of the weather. As can happen, it rained an awful lot while I was there. I was spending the day on the island of when a major front of storms rolled across the western Baltic from Germany. I was at the old Skovsgaard windmill when the storm began to develop. 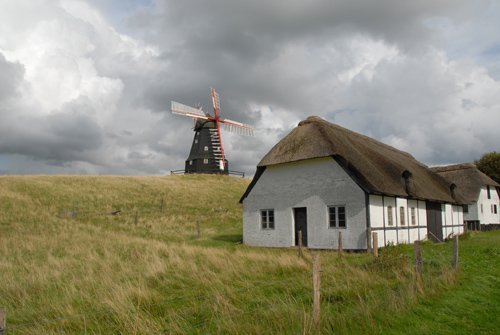 A while later I had reached the extreme southern tip of the island when the heart of the storm worked its way north. Within a few minutes I was engulfed in a torrential rain that finally slowed down a bit over an hour later. 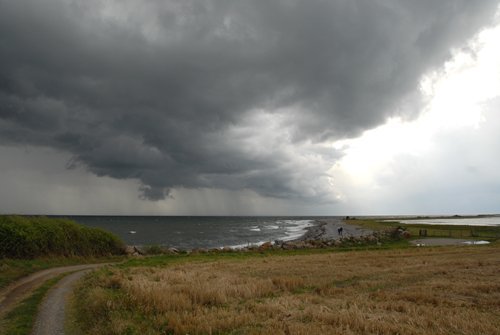 A few days later I spent the night at a lovely old inn in Ballebro on southern Jutland. I was about to take an early morning walk before breakfast when this lovely rainbow greeted me. The walk was aborted as the clear skies and rainbow moved off to the east for the rest of the day.

The ultimate goal of this rather roundabout trip through Denmark was the city of Silkeborg. It is here that Axel and his wife Kirsten live. Axel is one of my Danish “brothers”. I lived with his family during my year’s stay in Denmark. Fifty years ago in September the two of them were married. I was lucky enough to be able to attend their wedding and now I was even luckier to be a small part of their Golden Anniversary celebration. I was good to be back together with “family”. Since I left Denmark in 1966 my five brothers and I have been able to gather twice, first eight years ago and now this year. Here we are gathered in front of the Svostrup Kro, site of the anniversary festivity. 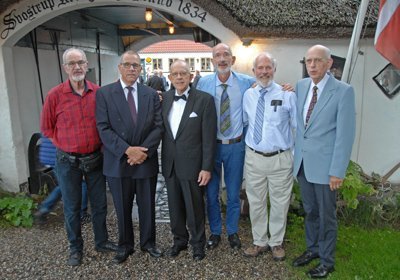 I feel extremely proud to be included as part of familien Grarup and to include all five of them and their spouses as some of my close friends. Tillykke Axel og Kirsten!

In a fashion, my last meal in Denmark always ends up being a smørrebrød, a beer and a glass of aquavit. So here is the meal. The sandwich is traditionally Danish: Shrimp, dill emulsion, pickled shallots and cos lettuce on whole meal toast. The beer is a Jacobsen Brown Ale and the snapps, Takke Akvavit. I always hope that it will not be my final last meal in Denmark!

I am again home; a good place to be. It is always especially wonderful to be back together with Gretchen. I am not sure that the sheep have missed me, but it is obvious that the rams and I get along better than they do with Gretchen. My return home brings me to the final anniversary of this post. In 2005, upon my return from my first trip to Denmark after about 40 years absence, I was greeted by a new resident in our barn. A cat had arrived, almost as if she came with me from Denmark. For her first 8 months at Whitefish Bay Farm she lived in the barn, getting along wonderfully with the sheep. By the following May she managed to finagle her way into the house where she now rules the roost. She still goes out with me in the morning to do chores. Her stays outside have become shorter, by her own choosing. Like us, she too is aging. Happy 10th anniversary Pussa! 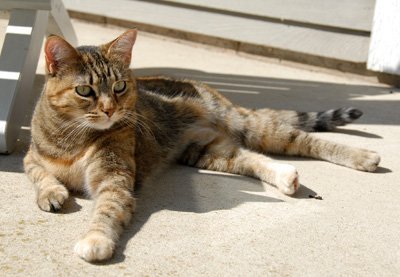