We seem to be just about up to normal in terms of our internet operation. The temporary shut down of the site resulted in four images disappearing from the blog. They are now back in place. The only casualty that we cannot repair is that a few comments were wiped out from the last few blog postings. My apologies to the posters. If you remember your posts we are happy to have you resubmit them. With the following Edition we are almost up to date.

Tuesday, March 27th: I think that the pace of the last few days is catching up with both of us. We are tired and my patience is wearing thin.

We are now at the point where any of the four remaining pregnant ewes could deliver. Winkie is the proverbial red herring in this equation. Based upon our breeding records she was due on March 12th. Obviously, our breeding records are wrong. Ulmer, the ram she was with, clearly marked her for that date. This was before we changed crayon colors so that we could catch re-marks. Winkie was never remarked. Nonetheless, she clearly looks and acts pregnant. We can extrapolate and add a full heat cycle to her first breeding date and then figure she was re-bred. Based upon that date, she would be due this Thursday, the 29th. Based upon the last possible date she was with Ulmer (or any other ram) she would be due on the 31st. Sometimes the delivery date is as much as 6 days after the due date. Will she string us out until April 5th?!

We checked one more ewe off the list this afternoon. Xanadu was building nests since a little before noon. Eventually we tired of repeatedly checking on her. She then delivered a huge ewe lamb at about 1:45 PM. It was obviously the first thing out of Xanadu (no fluids, no bags, just pure lamb!). She is another first timer. Bless her heart, she does a bang up job as a mother. She followed me into the jug quite nicely and retained all of her focus on taking care of her lamb. Mindy’s heritage shows through. Mindy is once again a great grandmother, which makes Nanoo Nanoo a grandmother again. Cheers to all concerned!

Wednesday, March 28th: Our problems with our website and with email are taking up much too much time, at a point when our patience for such things is much too short. At least the barn has settled down a lot these days, thankfully.

Paul, our vet, called us back today with further help regarding our pneumonia problems. The lab results are not yet back, but he has been talking with a sheep specialist/colleague at Ohio State Vet School. We now have some newer recommendations regarding medications and dosages.

Yippee is the last of our first time mothers. Early this afternoon she displayed all the signs that she was going to lamb. By 2:30 PM she was busy “talking” to her as yet unborn babe. Just as we were starting our afternoon lamb tagging, docking and weighing chores, Yippee went into active labor. She delivered a large, ewe lamb all on her own. She was a model mom and did all the right things.

Yesterday’s champion first time mother, Xanadu, decided to stretch our patience during evening chores. Before we could feed her, she jumped out of the jug. She then proceeded to desperately call for the lamb she left behind, almost as if she could not understand why it did not also clear the fence with her. We untied and opened the gate and back in Xanadu went. This scenario repeated itself four times (even after she got her dinner!) We finally took the time to set up a higher fence in front of her pen, which frustrated her efforts at last. Thankfully, by 10 PM she had relaxed, calmed down and seemed free of the gremlins that were bothering her earlier.

Thursday, March 29th: Today was a day for catching up. No lambs were born. Tricia and Winkie seem to just be biding their time. Over the last couple of days we put off trimming hooves and putting jackets on new moms. We have expanded the third mixing pen so we need to get a few more moms ready for their next big move. We moved Umeka and her two girls this morning. The two lambs were more than ready for the new adventure. Weft and her two little babes moved this evening. For them it was a bit scarier than it had been for Umeka’s girls, nonetheless, by bedtime they were settled in. The lambs in the first mixing pen are all doing quite well. It is hard to believe that we have already weighed 11 of them at their 15th day. Lots of tails have been lost in this group. 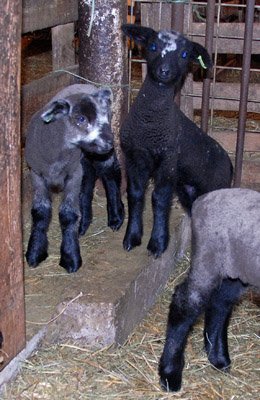 This evening Tricia is behaving as if she may go soon. It figures…tonight we are supposed to get snow and sleet accompanied by strong east winds. Cold and damp here we come again!