Friday, March 30th: Today has been a real bummer! What was supposed to be our first reduced lambing schedule in many years has not resulted in less problems. We (as well as the sheep) will be very glad to be finished.

Overnight I planned to check on Tricia at 1 AM. Unexpectedly the old alarm clock failed to go off then. A little subconscious voice told me to wake up, but it was already 3 AM. In the barn, Tricia was looking very uncomfortable but did not appear in labor. I set the alarm for 6 AM; it failed again! I awoke at 7:30 AM and made a quick dash to the barn. Tricia was where I had left her earlier, but was doing some straining, without signs of anything coming out! We made a quick decision that Tricia’s problems were beyond our expertise and therefore called for veterinary help. Despite a very heavy, wet snow that decided to start this morning, Paul was able to get here quickly. He brought along a vet student, Allison, who was on spring break. It was fortuitous that she came, as it turned out we needed all the hands we had available.

Paul was eventually able to assist the delivery of a large ram lamb. The lamb was a breach presentation (tail first, no back legs present), which is why Tricia had not progressed. That is also one of the most difficult and dangerous assisted deliveries to perform; it is definitely beyond our skills. Having successfully gotten the lamb started, Paul went back in for a normal presentation delivery of a second ram lamb. Paul also was concerned that all was not right inside Tricia. So after getting number two started Paul again went back in for an exploratory exam. He found that Tricia’s uterus was torn and that intestines were trying to enter the cavity. The only way to try to repair the tear is to prolapse the uterus outside the ewe, stitch up the tear and then re-insert the uterus, suturing up the opening so that the ewe cannot push anything and everything back out. None of the above is an easy proposition for a vet. Paul was hopeful that he had succeeded when he was through. Tricia was still not safe. Even if the surgical corrections hold up, the risk of infection is large. The amount of stress that she had been under also is extreme. After giving Tricia a battery of medications Paul was done. By 9:45 Tricia had her head up and was licking the lambs (albeit weakly!).

We thawed the last of our supply of frozen sheep colostrum and tube fed both lambs. It was the energy drink they desperately needed. By 11:30 Tricia was able to get up long enough to get a good drink of water. During the next half hour she got up twice, but was too weak to stay up very long. By 2 PM we decided that we had to move Tricia and the lambs from the birthing area (which we had fenced off from the rest of the flock). It was in a cool area; it was damp from all the surgery and treatment, and not a quiet place for the three. We were able to get Tricia up again and then gingerly walked her to a clean jug, with her leaning more on me than anything else. We at least made it. Once there she stayed up long enough for both lambs to try and nurse. The rest of the afternoon she was down. Close to 4 PM she began shivering, probably a sign of shock. We called Paul, who returned and got Tricia set up with an IV of dextrose and electrolytes. The two of us then sat with her for the next 45 minutes as the IV bag slowly drained into her. The fluid seemed to help. By the end of evening chores (which ran late, past 7 PM) she briefly got up on her own. At the 10 PM barn check she again got up on her own, ate some minerals, and a bit of hay. She had already drunk some water and eaten some hay before 10 PM. Even with the lambs getting in some nursing, we figured that it was not the normal amount, so we again tube fed them before bedtime.

Tricia is by no means “out of the woods”. It is going to be a difficult recovery. For us it was a totally draining day, both physically and emotionally.

Saturday, March 31st: We honestly did not expect to find Tricia alive this morning, but there she was at 6 AM! She got her morning medications while she was still lying down, but then got up as we were feeding everyone else. She ate a bit of grain, then some hay, had a drink and then returned to the hay. None of these activities were vigorous, but still a hopeful sign.

I neglected to relate that yesterday was also a miserable day, weather wise. While we were all treating Tricia, we experienced a heavy wet snow outside. By noon it was all but over and slowly starting to melt. The overnight lows were not as extreme as originally predicted. Hopefully it did not get cold enough to seriously damage lots of the bulbs on the trees and alfalfa. The previous evening we cut the daffodils which were in full bloom next to the house. The early tulips would have to fend for themselves. Apparently the cold and snow did not do them harm. It is hard to believe looking, at this picture, that on Friday they were buried in wet snow. 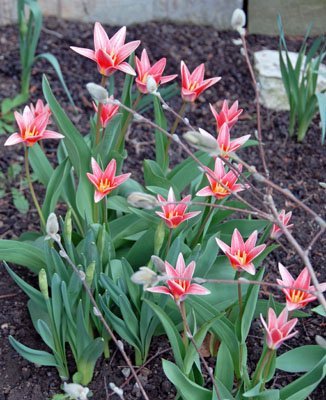 Winkie is still playing the waiting game with us. I suspect she smiles at us every time we appear in the barn to check on her. At evening chores and later at bedtime barn check Tricia was up and eating.

Sunday, April 1st: Tricia is not quite as perky this morning, but she ends up eating and drinking a bit. Her lambs get to nurse. We do not know how much milk they get from Tricia but we suspect that her milk production is not where it normally would be. We continue to supplement the lambs for her. We were “socializing” with Hope this evening. It caused us to think that we have not had a medical problem as severe as Tricia’s since Hope was born 16 years ago. In that situation Hope’s mother, Candice, did not have the same problem, but she and Hope’s two brothers did not survive. I guess that we can be thankful that problems this severe have not been an annual event.

The other jug occupants are steadily moving into the last mixing pen. This morning it was Wobyn’s turn. Before the move she and her lambs, Batman and Bobbin, obliged us with the “cute picture of the day”. 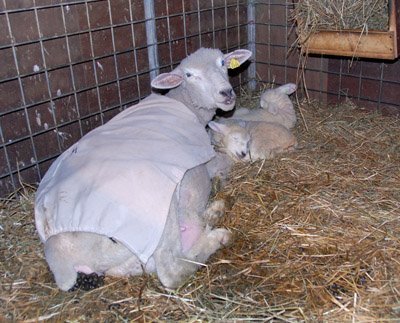 Wobyn with Batman and Bobbin

Late, breaking news! (Why does this remind me of the Muppet show’s “This is a Muppet news flash!”? Probably fatigue)…. As we began weighing lambs this afternoon, Winkie went into labor. She had a nice, normal delivery. Binkie has arrived, and with him the lambing schedule is completed.Both are doing just fine.