We were so proud of ourselves (in terms of our higher than normal degree of organization) that I thought I would try to make short postings to the Ewe Turn before and during lambing. With that plan in mind, I planned to begin with a bit of a prologue, before the first lambs arrived. I should have known better!

Our breeding records are very accurate, at least in terms of the earliest possible breeding dates for the ewes. As such, we knew that the earliest possible due date for any of our ewes, (assuming a full gestation of 148 days) was today, March 7th. There were only two problems with that projection: Yuliya and Viva. They both got a head start on the calendar! The result is two sets of active, healthy twins, yesterday and the day before.

March 5th: We have learned from experience that we will almost always have a few ewes that deliver their lambs before the due dates. Last year was a prime example, with Whosits delivering a very premature lamb long before we started watching for lambs. Our usual routine is to begin periodically checking the barn about four days ahead of the first expected due date. Those initial checks are not as frequent as they later become. E.g. they do not entail the “standard” 2 AM barn check. Up to March 5th those checks produced only eating, ruminating or sleeping ewes. My lunch time visit on the 5th  revealed that Yuliya had just broken a bag of water. Labor had thus begun. This was to be her first lambing, so we wished to keep a more attentive eye on her. Over the next 1 hour and 40 minutes she relocated many times from one end of the barn to the other (thereby disturbing everyone’s mid-day naps). Finally, at 1:55 PM she delivered a white ewe lamb, followed within 15 minutes by a black ewe lamb. Buttons and Bunny had arrived. Yuliya did a wonderful job without needing any assistance from us. She willing followed me as I carried the lambs into a jug (a small private pen). The first lamb, Buttons, was a bit slow getting started learning to nurse. I milked Yuliya (without objection on her part) for a few ounces. We then tube fed Buttons and were about to do the same for Bunny when she beat us to the task and learned to nurse on her own. Since then the three of them have not looked back.Yuliya delivered 2 days early. 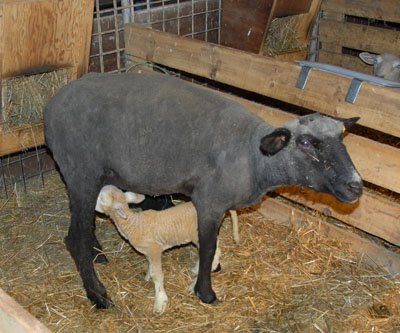 Buttons gets a drink; Bunny is too shy for a photo.

Thus, lambing for 2012 has officially begun, two days early. Of significance is Buttons assigned flock number: WBF2000. This is our 21st year of lambing. It is difficult to believe that there have been that many births since we started.

March 6th: Knowing that we were still “ahead of schedule” we opted to sleep through one final night. It probably would not have made any difference had I been in the barn this morning at 2 AM. When I showed up at 6 AM I was greeted by Viva and two lambs curled up together in the middle of the barn. The lambs had been nicely licked clean and I could tell, based upon Viva’s udder, that at least one of the two had already nursed. Since Viva had yet to pass her placenta, we could be pretty sure that the lambs were born closer to 6 AM than 2 AM. Viva had a black male, Bixby, and a smaller white ewe, Bianca. This is Viva’s third lambing, and her first set of twins. She was 1 day early. Again all three are doing well. 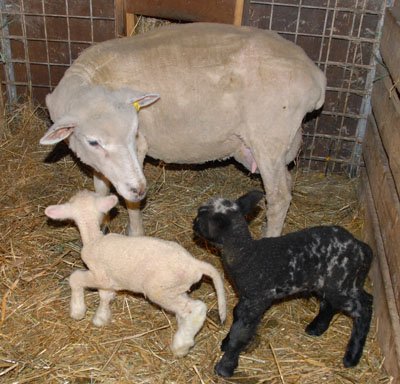 Viva with Bianca and Bixby

March 7th: This morning the alarm awoke me at 2 AM. My trip to the barn produced a very quiet, sleepy flock and no new lambs. At least the early morning trip to the barn was pleasant. It was over 40° (F) and beautifully lit by a near full moon. We are still waiting on three ewes who could be due today. From now on, until the last ewe has delivered, the visits to the barn are  going to be more frequent.

What do we do in between trips to the barn, when no one is in labor? Currently, Gretchen is sorting out fleeces, doing a final skirting on each one, and then making a preliminary evaluation before we price the fleece for sale. She has about 40 fleeces to go out of a total of 129. It is a slow and often tedious process. At least it can be stopped and started easily. I have gotten the big, double weave blanket project off the loom. For the first time a few days ago it was unfolded. It seems so much larger than I imagined. My current stage is to tie the fringe knots (all 244 of them) along both edges. It is also a good “start and stop” project. Pussa has decided that the blanket meets her approval. She and I promise a full, unfolded image, once it is finished. 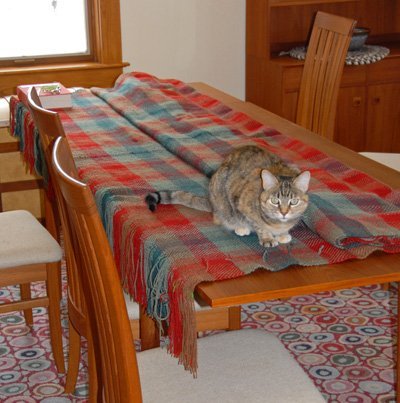 Time for a barn check….