Tuesday, 19 March – Late yesterday afternoon it began to snow, at least 4 to 5 inches. By 2 AM this morning the wind had picked up substantially. My walk to the barn was an adventure. At least there were no new lambs overnight. The snow has now tapered off, but the wind continues to blow in a frightful manner. The three outside doors at the back of the house (including our “everyday” back door) are drifted shut. Only the front door permits us to even get out…barely.

Weft signaled the beginning of the lambing push. Late this afternoon she delivered triplets, 2 ewes and a ram. She is a couple of days early. As with most triplets they are relatively small, especially the ram. The two girls were up and nursing quickly. The boy struggles.

Again it is unseasonably cold. The wind tries to suck the warmth out of everything. The snow continues to drift throughout the day and into the night. Weft’s little ram does not make it through the night. The ewe lambs, Chiquita and Chimichanga, are doing fine.

Barn checks continue to be an adventure, especially those in the dark. Astrid provided a welcome surprise at 2 AM: a large ewe lamb, Claudia, all cleaned up and dry. The two were quietly snuggled up together, as if calmly waiting for us. This is how a first time mom should be (not to mention a mom of any age)! Astrid does honor to her namesake, another beautiful mother.

Just after sunrise Wobyn had delivered twin ewes, Cricket and Cuddles. They were cold, especially the first one. It is 11°F (-12° C). Inside the barn it is just above 40°F. Once we got them into a jug, we helped with the drying, Wobyn did the rest. 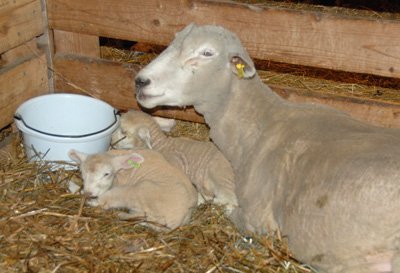 After figuring that the rush to lamb had begun, it didn’t. I was at least able to clear the driveway and the path to the back door. It is reassuring to know that we again have access to outside help if needed. It is also wonderful to use the usual route to and from the barn.

At 8:45 PM Yippee surprised us with twin ewe lambs. She was not even on the big list of ewes due over the next few days. The lambs are obviously not premature. She and Axel were able to conceal her breeding date for at least 4 days. The lambs, Courtney and Caitlin, are big and vigorous. We will take it!

The two of us could not stay awake this evening. We went to bed a couple hours early and set the alarm for an earlier barn check.

21 March, Thursday – Winola greeted us with twins (male and female), Charlie and Charlotte, at 1 AM. After a couple hour’s sleep we came back at 4:14 AM to find Zinnia and Zita at opposite ends of the barn, each with a signal ram lamb. Zinnia’s is dubbed Chumley and Zita’s Calvin. Another short nap and at 7 AM Wendolyn was making all the preliminary motions for labor and delivery. We took time for a cup of coffee and a snack. Within an hour she had delivered a single ewe lamb.

Out of necessity we are moving the earlier moms and their lambs more rapidly into the first mixing pen. Despite those moves the barn is filling up with occupied jugs (individual pens for ewes with their new born). It is like “the good old days” when we bred more than twice what we do now! Trouble is, the shepherds are showing their age.

Another potential problem this morning. Weft does not get up for breakfast (she is usually one of the most eager). After we had taken care of every one else, we got her up. Her temperature was normal, but she was putting no weight on her front left leg. She likes to climb the fence waiting for her feed. We surmise that she may have tangled/caught her foot and has a sprain. No signs of a break at least. Gave her a shot of banamine (sheep pain medication). Within an hour she was up and eating. Later this afternoon she was still up. Hopefully we have dodged a bullet.

After having 7 ewes lamb in about 30 hours the flock decided to take a rest. We thank them for it! By evening chores Weft seems to have regressed. Her leg is no longer a problem, but she acts depressed and does not eat. Wanetta has a pair of smallish ewe lambs at 9:30 PM. Shirley is being “helpful” trying to adopt the lambs. We are going to have to move her into the new wing of the barn. This kind of “Grannying” is not only disruptive to us but adds a lot of pressure on the real mother trying to get her lambs started.

As we are finishing up with Wanetta, Umeka goes into labor. By 10:30 PM she delivers a monster ram lamb (14+ lbs). We had almost given up on Umeka as she was way “overdue” and was not showing much of an udder. A pleasant surprise, especially when it became apparent that she also had a good milk supply.

22 March, Friday – I found a “train wreck” in the barn at 2 AM. Whiskey had delivered a ram lamb and her uterus. We are out of our abilities when it comes to repairing a uterine prolapse. Thankfully we have a large animal practice with 24 hour on-call service. Randy, one of our vets, got here quickly. By 3:30AM we had Whiskey put back together and sutured up. We thawed some of our supply of sheep colostrum and tube fed the lamb. After a two hour nap we returned to find that Whiskey was up, looking good and eating hay. We are not sure of her relationship with the lamb; she seems a bit confused. At the same time we found that Ysabel had produced a large ewe lamb, almost as big as Umeka’s. The lamb was squeaky clean and already up and running! It appeared as if Ysabel had waited until we left the barn at 4 AM and then figured it was a good time to lamb without human interference.

Ysabel’s lambing proved to be the last of the day, for which we were exceedingly grateful. We spent much of the morning dealing with Weft’s problems and new problems with Winola. In both situations we had exhausted our medical expertise. Paul, one of the vets paid a visit. Diagnosing a sick animal of any sort is difficult and sheep are often especially challenging. In Weft’s case it was decided that she might have a uterine infection. Winola is off her feed and to our knowledge has not laid down since lambing 36 hours previous. Paul could detect lung noises pointing toward pneumonia. We now have treatment regimes for both of the ewes.

The crazy hours that we have been in the barn have not only fatigued us, but has taken a toll on the flock. With some quiet time on Friday afternoon, just about everyone was napping! 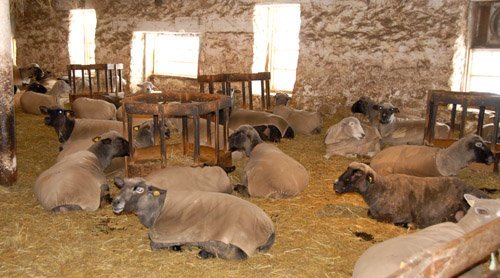 We finished a long day with the good news that Whiskey and her lamb had worked out their differences. At our bedtime the lamb was contentedly nursing.

Pictures from the last few days are in short supply (just like our sleep reserves). Hopefully time will permit more opportunity for photos.