23 March, Saturday – We have had yet another early morning delivery. This morning by the 2 AM check Viva had delivered two boys. When we got there, they were already nicely dried off and nursing. Viva had kept them under tight control. It was an easy transfer into a jug. It also was nice not having a “Granny” interfering! We rejoiced getting back to bed before 3 AM.

Our two moms with health problems are not fairing well, especially Weft. Winola is, at least, eating and drinking better. And finally, at 2 PM she is lying down for the first time since she delivered her lambs (i.e. about 60 hours ago).

With Viva’s delivery we finally finished the “mid-week” lambing push, “only” 3 days later. Now we are facing the weekend push of seven expectant ewes. Currently it looks as though they are going to keep us waiting!

24 March, Sunday – This morning it was Yoko’s turn. At 2 AM she was just finishing her second  delivery. This time she has two ewe lambs. Unfortunately, Yoko does not seemed to have learned from her first experience a year ago. At that time she “sort of” rejected her first lamb, Brewster. In that situation, after spending a number of days in the stanchion, she bonded to her lamb. This year, once in the jug, she decided again that she was not sure about motherhood. At least, she adjusted to the stanchion quickly. We had to strip out enough milk to tube feed the lambs. Unlike 24 hours ago, this was an early morning with very little sleep. Even if Yoko ends up loving these two lambs dearly, this will be her last chance with us.

Winola improves a bit today. She eats and drinks well, but still has difficulty getting up. She is producing a good milk supply and is up enough that her lambs are nursing well and growing nicely. Weft, on the other hand is doing very poorly; she is not responding to her treatment. Her milk supply is diminished or gone. Today we managed to get both of her lambs to nurse from bottles. We will thus be able to keep them going.

The remaining pregnant ewes kept us waiting…and waiting today and tonight. Their delay is at least allowing us to get some of the jugs emptied out. There are now 13 ewes with lambs in the first mixing pen. We will add one more tomorrow and then start a second mixing pen.

25 March, Monday – No new lambs overnight. It gave us a bit more sleep, but the 2 AM trip to the barn is still disruptive for all of us, human and ovine, even without any new lambs. Our outlook is not helped by the general gloomy weather that has settled upon us. It has been a long while since we saw the sun. The cold has moderated a bit; that does help. The view out the door of the barn to the first pasture gives a good perspective in terms of how far away we are from green grass and grazing. Usually by now we would have newly arrive bluebirds on top of the fence posts, but today the tops of some of the posts are barely peeking above the snow. 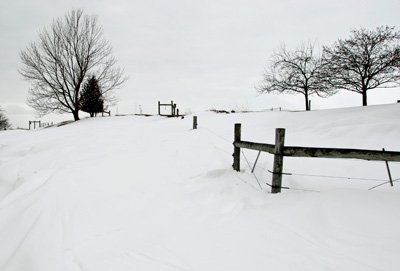 We recorded no births today! We had time to catch up on other non-sheep tasks. We also discussed Weft’s and Winola’s conditions with Paul. We are all stumped. He wants us to try a different antibiotic, and in the case of Weft some injectable vitamin B (to hopefully stimulate her totally nonexistent appetite). The frustration is so intense when you seemingly cannot do anything for a ewe who is not only a productive member of the flock, but also a good friend. We now fear that we will loose her soon.

26 March, Tuesday – One more time…a 2 AM delivery! Allspice has two ram lambs. The three of them are scattered across the barn. Once into a jug she accepts them and lets them nurse. Unfortunately, her main concern is getting out of the jug. Up go the extra high panels again.

The frustration that Allspice produced is, however, offset by our other 2 AM discovery. Weft has had a terrible case of diarrhea, but she is also eating hay like mad! Despite our depression of yesterday I believe she has turned the corner in a positive direction. She continues to eat all morning and is much more alert than we have seen in a long while. We can now joke about how a good poop can really solve so many problems!

The first mixing pen is now full: 14 ewes and their lambs. The morning breakfast ritual includes waiting impatiently and complaining. 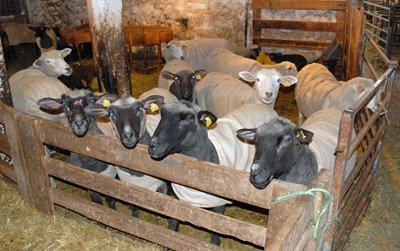 Once breakfast is served it is time to eat unless you are a lamb and must participate in the races around the feeders. 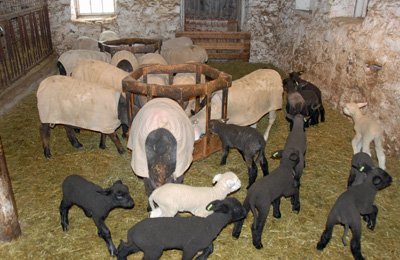 After some good exercise many of the lambs are now eating solid food. Lucky for them there is still room at the feeders! 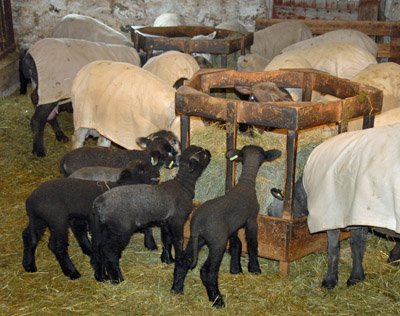 Zoe does not eat during morning feeding, a sure sign that something is pending on the lambing schedule. By 10 AM she produces a single ewe lamb. Brie has a younger sister! Just like last year, Zoe takes her time settling in with her lamb, but by 11 AM they seem fine. That’s a good thing too. It is going to be a busy morning by the looks of it.

At 11 AM Willetta renewed our faith in good mothers by delivering a large ewe lamb and taking care of everything quite nicely. While Willetta finished up, Ultima started early labor. She took until 1 PM to produce a large ram lamb. Within 15 minutes the lad was up and nursing. Another morale booster! We became concerned as the afternoon wore on because Ultima had not cleaned. After evening chores we did an examination but could not find another lamb. Ultima got a shot of oxytocin. By bed time she had cleaned.

There are times when we wonder if all the work, long hours and problems are worth our efforts. But, if we can find time to visit with the healthy and seeming happy lambs we realize that this is what makes the experience worthwhile. Here is a taste of happiness! 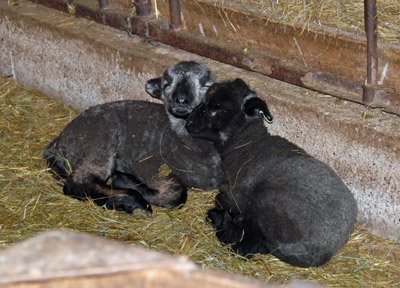 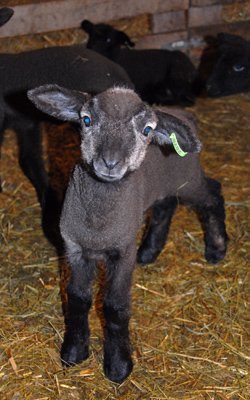 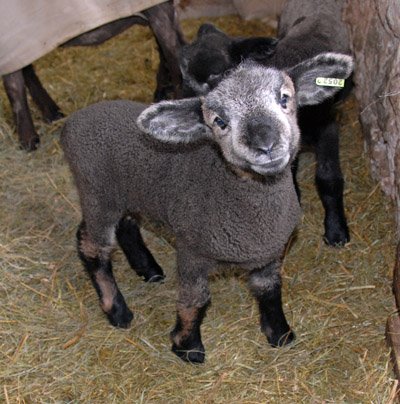