27 March, Wednesday – It was crystal clear this morning at 2 AM: a full moon and cloudless sky. All I could hope for was that it would remain clear during the day. Lo and behold, at 6 AM it was obvious that it was going to be a warmer, sunny day! For the first time this year a male Cardinal was rejoicing the early morning with song.

We managed to get through the night without any new lambs. That makes three straight Mondays without lambs. Today is the beginning of the third week of lambing. We started with a strange twist. At 6 AM both Winkie and Uhlayla were in labor. Winkie had already produced at least one bag, which looked a bit different than usual. In addition she was chewing cud, as if she was done lambing. We eventually decided that we had better doing some examining. The bag contained a very small, mummified fetus. Initially we could not find anything else still inside Winkie. Eventually it turned out there was a normal ewe lamb way back in there, presented backwards. With a lot of help, we got it delivered and life was again good for Winkie, her lamb, Cha Cha, and us.

Uhlayla, as she usually does, took her own sweet time. We managed to get all of our morning feeding chores done, before she got serious about a delivery. By 9 AM she had a good sized ewe lamb. It looked like she was not finished, but considering her usual lack of speed we decided to put her and the lamb into a jug and have a quick breakfast. By 10:30 AM she delivered a second ewe lamb, in the jug. It was hard to believe, but the arrival of Champagne and Chardonnay proved to be the last lambing of the day.

We are well into the establishment of the second mixing pen. This morning it was time for Whiskey and her lamb to move in. It was also time to remove the sutures that had retained her previously prolapsed uterus. It looks like it has done a very nice job of healing.

Weft and Winola continue to be on the mend. They still have a bit of recovery before they can join in with others, but we are very happy with their progress.

During morning chores I heard the year’s first Sandhill Crane flying by. Late this afternoon a couple of Robins appeared on one of the few bare spots of pasture. Perhaps there is hope for spring.

For those trying to keep track, here are the lambing numbers to date. Twenty nine ewes have lambed, producing 44 lambs. That is a decent, but not spectacular percentage of 152.7%. Of greater interest is the sex imbalance. Of the 44 lambs only 16 (36.7%) are males! We are now waiting on the last scheduled six ewes, all of whom “should go” sometime this week. It also looks as though we may have at least 3 additional pregnant ewes scheduled for April 6th (all the result of the unscheduled visit the rams paid the ewes after breeding was officially over.)

28 March, Thursday – The lambing pace is slowing; the shepherd energy level is lowering. It helps today to have more sunshine and a little warmth. The snow is actually receding slowly, which is nice. Perhaps the moisture is soaking in more than running off.

Naps are always appreciated around here. Viva and her boys Click and Clack always stick close together, awake or asleep. 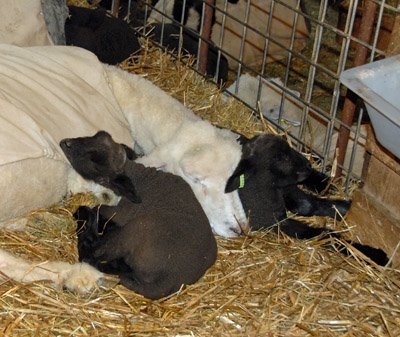 Vanilla could not decide if she wanted breakfast this morning. Once she got to work it was afternoon. By 1 PM she had delivered a white ewe lamb, Creampuff, who she got squeaky clean before we could get her into a jug. Waffle was not to be outdone and also at 1 PM she delivered twin ewe lambs, Cheesecake and Crumpet. The abundance of ewe lambs continues!

Yoko was given her freedom from the stanchion today. She does so-so in terms of accepting her lambs. This story is still looking for an ending. The same applies to Allspice. Her jug still needs high walls and her lambs seem like after thoughts to her. It does not help that neither Yoko nor Allspice seem to be producing a lot of milk. 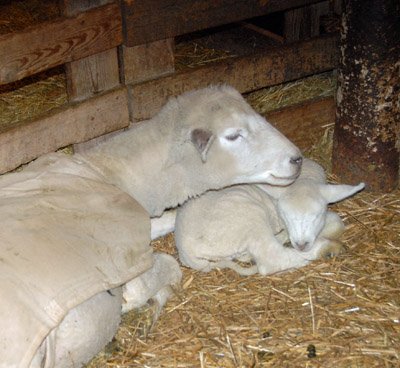 We are down to 4 scheduled pregnancies: Xanadu, Artemisia, Ariel and Woolamena. Any of them could go at any time.

29 March, Friday – Another quiet night. The desire to sleep through the 2 AM alarm is becoming greater. It was another sunny, warmish day. Oh how it is welcome by everyone!

Artemisia was nice enough to schedule her lambing for late morning. She is another first timer. She managed to do an excellent job delivering both her lambs, a ewe and ram. The ram is smaller and arrived inside an especially thick sack. I was able to get it torn open as he arrived. I am not sure he would have made it out on his own, even with Artemisia’s help. The end result would have been severe fluid inhalation. A few hours later we are also starting to think that he may be challenged in other ways. He is having great trouble learning to nurse.

30 March, Saturday –  We lost our sunshine and warmth today. It was replaced by drizzle, rain and fog. We will take the moisture along with the very slow gradual melt of our snow cover. The south winds that brought the rain also seems to be aiding northerly bird migration. Our first Song Sparrow of the year was under one of the feeders this morning.

The remaining pregnant girls kept their legs crossed today and tonight. No new lambs today. The pause let us get caught up naming all the lambs. Artemisia’s boy, Columbus, is not doing well; he lost weight over the last day. We tube fed him tonight after unsuccessfully trying to get him to nurse from a bottle.

31 March, Sunday – No more lambings overnight. Xanadu is toying with us this morning at breakfast. She is now at 154 days, just about as long as any of our ewes wait to lamb.

The second mixing pen is now full this morning. It also means that our jugs are being vacated. We now have enough empty jugs to accommodate the last three ewes when they lamb. This morning we were able to start taking down some of the jugs at the back of the barn. It is nice to free up a little more room for the rest of the flock. This afternoon we set up the third mixing pen. Weft, Winola and their lambs were the first to move in. They all seemed happy to be there and we are extremely pleased to see how they are all doing!

Xanadu finally got serious. By late morning she produced a big ram lamb, already tabbed as “Cowabunga”. This is another case of a ewe who does everything on her own, with efficiency and care. That is a pleasure to deal with.

Artemisia’s boy, Columbus surprised us this evening during weigh-ins. He has suddenly started to grow! Hopefully he has finally learned how to properly nurse. His sister, Columbine has a big head start on him, but hopefully he can now keep up.

It is difficult to believe, but some of the lambs are now over 15 days old. That means that they are getting their 15 day weigh-ins. My how they are growing! So far the champion is Cupcake. She is now over 25 pounds and averaging .92 lbs per day. Cuddles has a couple days to go until her weigh-in. But she is definitely banking on the “cute” factor. 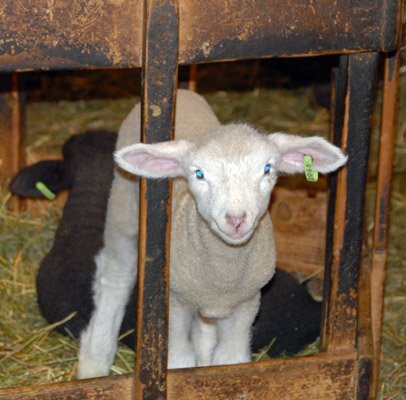